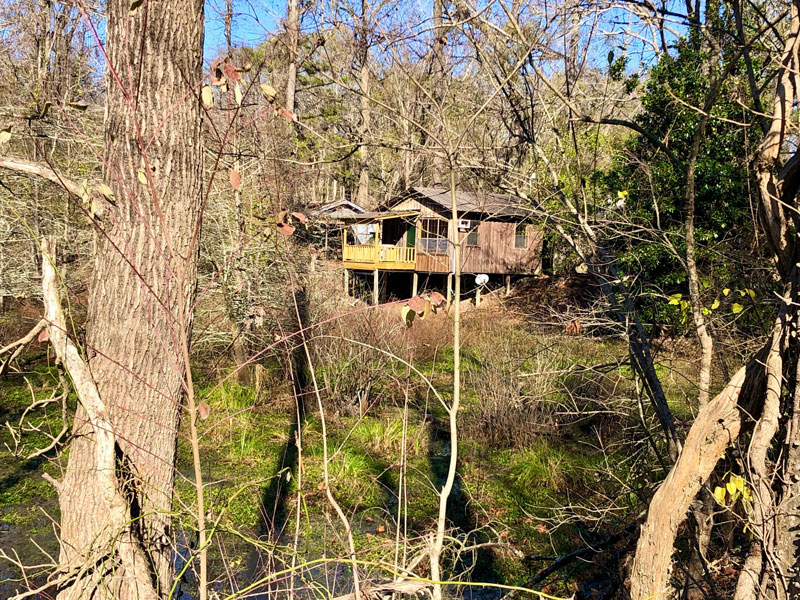 Ever been in a hunting camp?

Best of all? Lifetime friends and lifetime memories.

And, if you had more than a handful of hunters — the camp in McElroy Swamp could count on at least a dozen when the dogs were turned loose on swamp whitetails — you always had one guy rivaling Natty Bumppo. You know, J.F. Cooper’s immortal hero (“The Deerslayer” & “The Last of the Mohicans”), a deadly shot, and, in this case, a bona fide “swampateer.”

We had one, maybe two… or three.

Then you always have a cartoonish character, an Elmer Fudd, he of “wrascally wabbit” fame, the guy who came back to the camp with outrageous stories of his adventures either on his trek to his deer stand, or something he saw while he was there (and, we feared, most times in his dreams while he dozed there).

Our “Elmer” primed himself for a ruse so memorable our camp scribe spent 30 minutes documenting its details.

It started far away

It started hundreds of miles away on a dry, dusty expanse of mesquite in South Texas. Quail hunting meant walking miles behind dogs, and running into all sorts of critters (javelinas, roadrunners) we don’t find around here – and antler sheds by the dozens.

Aha! My mind grinned at the prospect. Here in front of me was a pair of sheds from a 10-point buck side-by-side so it was easy to know they came from the same whitetail.

I thought of Elmer!

The bump in the road was how to get these things into my bag and make the pre-9/11 airplane trip home.

The next step was to make sure one side, a 5-point antler, was set in just the right place where our Elmer would find it on his ramblings.

The results were immediate: Elmer returned after dark with a story to stag-ger the imagination, especially when all of us hunters knew a 10-point buck — a McElroy 10-pointer — was as rare as finding a rhino tromping through the palmettos.

Our Elmer swore he’d seen this deer last season, and had hunted him hard – obviously to no avail.

He said he’d seen that season’s hookings far up a small water oak sapling to believe the massive buck continued to patrol around the right-of-way near his stand.

Furthermore, our Elmer believed he’d seen his newfound quarry show his rump while disappearing into a thicket in that day’s fading light. The most unbelievable part of his telling was that nobody in the camp fell out on the floor in uncontrollable fits of laughter.

All that remained was to place the other shed near enough to his stand to make him believe the mysterious buck left sign within gun range. That worked, too, and our Elmer’s recounting of daily experiences in his quest became the stuff of legend. Somehow he knew he had to take this trophy during the still-hunt only season before our season with dogs would run his ghost deer in front of a another hunter.

To this day, no one has told. And yet, the story didn’t end there. There was payback.

Later that season, we decided to make a rare midweek afternoon hunt with dogs in a seldom-hunted part of the swamp. There was a big 8-point bedeviling us – yes, he made fools of our Natty Bumppos – and our crew was determined to enjoy a hearty venison sauce piquante after the next Saturday morning hunt.

Release the hounds! I was set up perfectly. Knowing where this buck ran made it easy to find the just-right spot, and when the pack of walkers began the push, their yelps turned into a chant signaling the pack was on a hot trail.

The buck appeared on a full run, and the shooting lane was when this big swamp buck cleared that big willow about 40 yards to my front.

As I had hoped, that happened. Safety off, the antlers cleared the tree, squeeze the trigger. BOOM!

Payback was a one-inch vine, an undetectable through-the-scope barrier between bullet and target. The shot was so clean it cut the vine in two.

Then I made a mistake: I knew somebody, in post-hunt analysis and knowing I fired a shot, would ask how I missed.

So, I cut the vine and brought back the two pieces of wounded wood to explain the miss.

Now, 20-something years later, the mounted trophy of two pieces of a vine still hangs on the camp wall amidst all the trophies of our mounted swamp giants.

The agony is answering our visitors’ continued questions about this rare display.

Payback has its own particular brand of hell.

Cole Burton, 5, and Clay Burton, 7, started raising worms to fish with and now they’ve gone in to business. […]