Scottie Coutee, a 53-year-old logger from Lena, has his wife to thank for encouraging him to stay on his stand a bit longer. He stayed, an unbelievable buck stepped out and Coutee lined up his crossbow on the buck and was soon standing over the biggest and most unusual looking buck he had ever seen.

“When I’m hunting or fishing, my wife and I text each other and it has usually been the case when we sign off, something good is about to happen,” Coutee said.

On the morning of Nov. 9, he crawled out of bed around 4:00, got dressed and headed for his favorite hunting grounds, the Spanish Lake Unit of the Red River National Wildlife Refuge in Natchitoches Parish.

“I had found an area where three trails converged into one main trail on the refuge and I knew this was where I wanted to hunt,” Coutee said. “I had evidence of a big buck that was hanging around in that area and I was hoping that maybe he’d step out.”

Climbing into his lock-on stand before daylight, he settled in some 15 feet above ground where he had a good view of the convergence of the game trails he had found.

“Just as it was starting to get light, I watched a big boar hog walk one of the trails and disappear into the thicket,” he said. “Then about 7:40, a big doe came out and was nibbling on foliage and I thought about trying for her as I needed some meat. However, something told me to let her go.”

A little later, a small 6-point buck crossed the clearing he was watching and continued on across.

“Around 8:30, I texted my wife and told her it looked like I wasn’t going to see anything to shoot and would be headed home soon. She suggested that I hunt awhile longer; said I might see something I want to shoot. Then I remembered,” Coutee recalled, “that just about every time after we text, whether I’m fishing or hunting, something good is about to happen soon after we hang up.”

Before heading out to hunt, Coutee is serious about concealing any odors that might alert deer. He sprays his hunting clothes and leaves them outside. When he left his 4-wheeler parked 150 yards from his stand, he had sprayed again with Scent Killer Gold, his preferred scent masking spray. Shortly after texting with his wife, Coutee looked up to see two does coming out of the thicket on one of the trails he was watching. 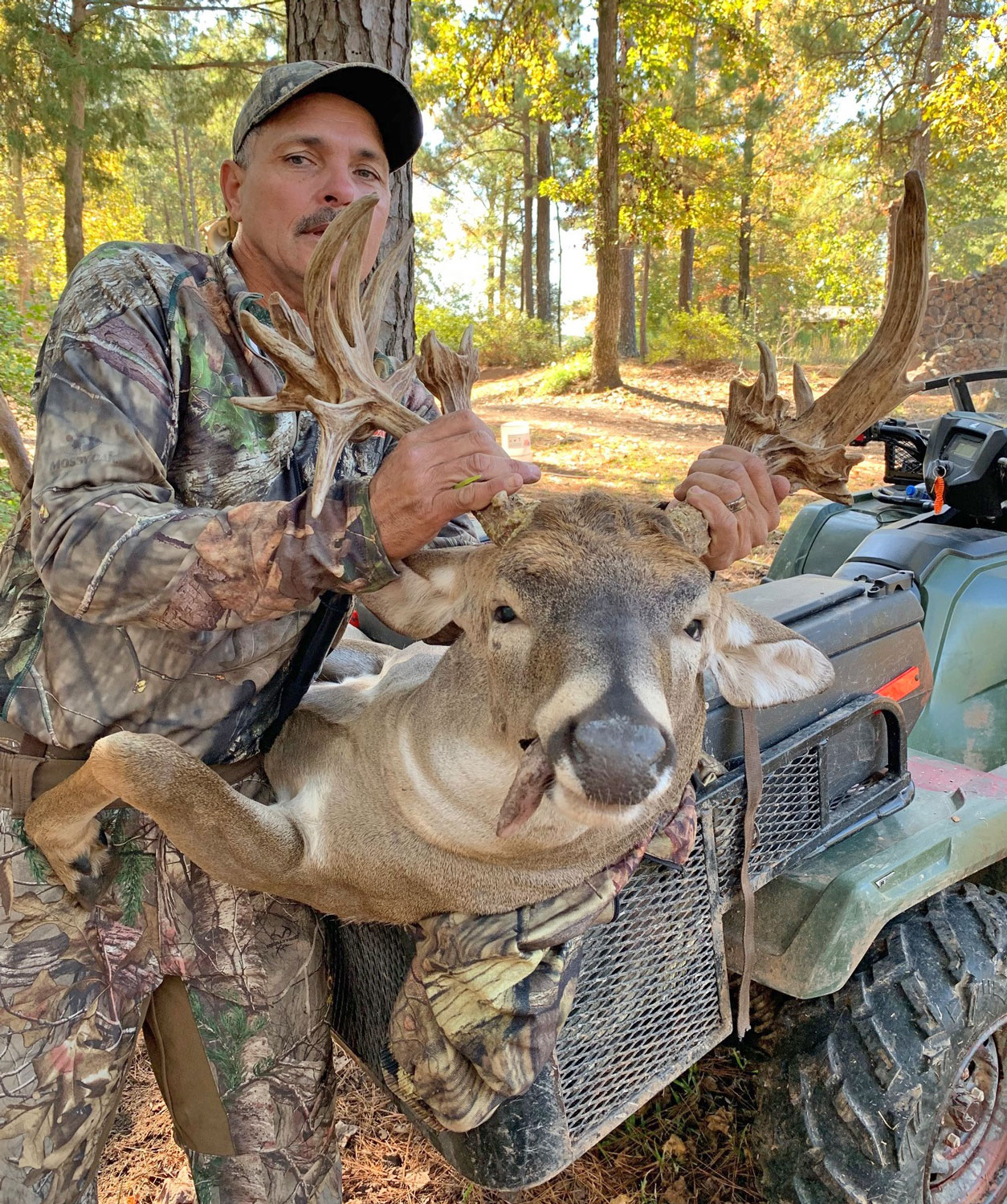 “Right after the does came out, I looked up and saw this big buck come out of the thicket and moved toward me,” he said. “I could tell, from the way he was acting, thanks to the cover scent I had sprayed on, that he hadn’t smelled me. I used my range finder to determine the distance to an opening he was headed toward and saw it was 50 yards, an acceptable distance for a shot with my Raven crossbow that my wife had bought for me. This was the first time I ever hunted with it. As soon as the buck reached the opening, I hit the trigger and felt like I’d made a good hit.”

The buck took off but only made it about 30 yards before he piled up. Coutee texted his wife telling her what he had shot but she wasn’t sure if he was telling her the truth.

“She said text me a picture,” Coutee said. “I told her I would when I got down but I wanted to stay in the stand for a few minutes to be sure he was down for good. When I walked up to him, I couldn’t believe that mass of points he had on his rack. I’ve killed several good bucks but nothing compares to this one.”

The heavy rack featured points going in all directions and Coutee counted 30 points in all. The inside spread was 18 inches and the neck measured 31 inches around.

“I took the deer to a taxidermist in Marthaville and he will determine the age and the official score on the buck and let me know. We’re estimating the rack will score at least 180 inches,” he added.

The huge buck did measure 180 and had 38 scorable points. It also weighed in at 278 pounds.

Coutee thanks his wife who bought him his crossbow and whose cell phone texts usually signal that something good is about to take place. On Nov. 9, that “something good” was simply outstanding.