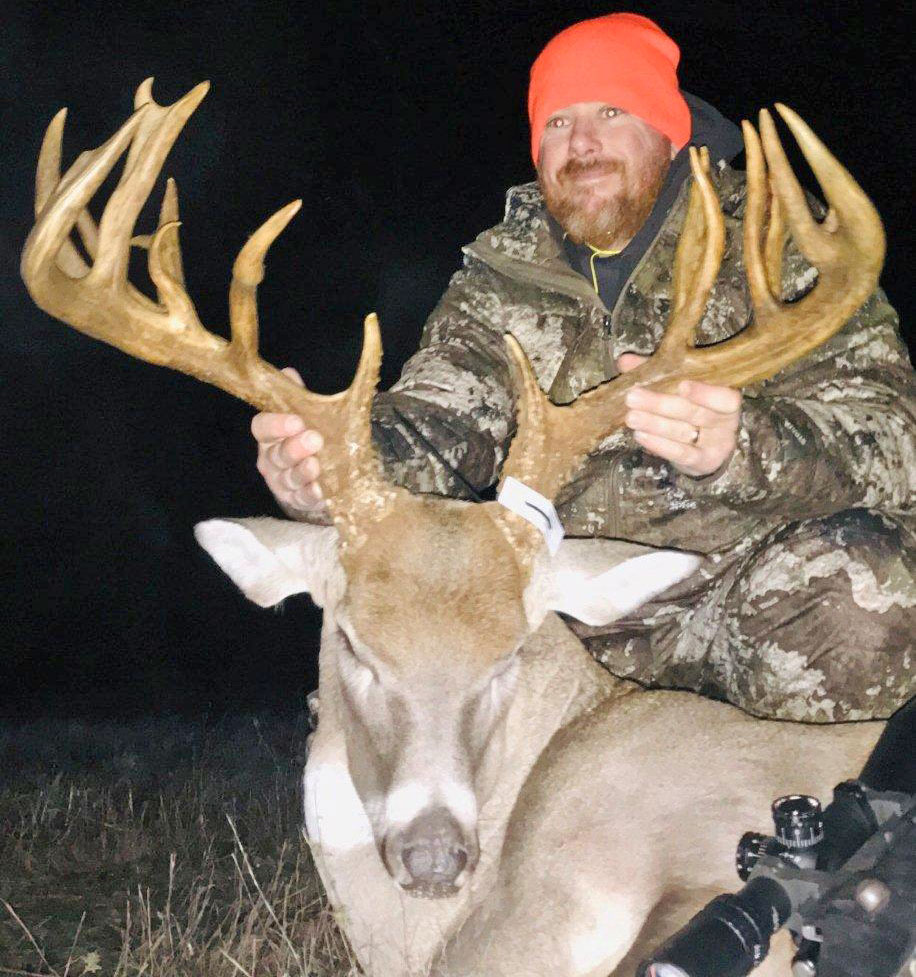 After three chances, it was beginning to look like Joshua Jennings, his two sons and his dad were never going to have a decent chance at a monster buck hanging around the private lease they hunt in Caddo Parish. Fortunately, on the fourth opportunity, Jennings was able to connect with the big buck.

“Last season, the buck showed up three times when we had the opportunity to get him. The first time, my two sons and I were in the stand and around noon, my younger son, Jonah, who was 11 at the time, said he was starving and talked me into taking him to get chicken strips. We went and got lunch, and before we got back on the stand, I checked my trail camera and 30 minutes after we left, the buck had crossed the power line right of way we were watching,” said Jennings.

The bigger bucks on the 40-acre plot they were hunting usually don’t begin showing up until nearer the rut around Thanksgiving. However, this big buck was coming out earlier.

“The following day, I put Jonah on the stand hoping the big buck might show up, which he did. However,” Jennings continued, “either Jonah was looking out the wrong window or was playing with his phone when my trail camera showed the deer crossing the line in front of the stand at 50 yards; Jonah never saw him.

“Then the third encounter took place shortly thereafter when it was my dad’s birthday and I wanted him to have a chance at the buck. I told him to get on the stand overlooking the highline but he decided to sit on a different stand. You don’t have to guess what happened; while dad was on the stand he chose to hunt, my trail camera showed the deer crossing the line in front of the stand my dad was not in.”

This deer season, Jennings, who works as a locomotive engineer for KCS railroad, checked his cameras and got a night-time image of the buck, the first photo of the buck this season.

“I got a call from my job and had to make a run to Beaumont on Oct. 31 and when I got back home, I went by the feed store for corn but they had run out. I decided to go get on my stand anyhow,” Jennings said.

Climbing into his box stand overlooking the right of way around 3:00 that afternoon, Jennings sat without seeing anything until around 6:00 when four does came out and began browsing on French mulberry growing alongside the line.

“I watched the does for awhile until they finally left and went into a clear cut next to the line and shortly after they left, I looked up to see a buck step out. I had been getting photos of a nice 8-point that had been coming out in late afternoon and I thought this was him. I put my scope on him and realized this was not the 8-point; it was the big buck we had been hunting,” he said.

The buck was walking along, nose to the ground at about 150 yards when Jennings whistled to get him to stop.

“When I whistled, he stopped broadside, I hit the trigger on my Remington .300 ultra-mag. I usually drop deer in their tracks with this gun but this deer took off into the woods. I wondered if maybe I had missed,’ said Jennings.

Walking down to where the deer was standing, Jennings found blood and located the buck which had run only 10 yards into the woods before expiring.

“The photos I had on trail camera were somewhat blurred as he was moving but when I actually put my hands on him, I had no idea he was this big. I called my wife to tell her I’d killed the big one and she wanted to know now many points. I told her I’d counted 10 and she got excited I had shot a 10-point buck. Then I told her that was 10 points on one side; I hadn’t had time to count the other side,” he said, chuckling.

The buck had a total of 20 points with an inside spread of 23 inches, bases over 5 inches and weighed approximately 250 pounds. Simmons Sport Goods in Bastrop scored the buck at 210 4/8 while Greg Hicks, official scorer for Buckmaster, scored him at 216 1/8 inches. He was estimated to be at least 5 ½ years old.