Twenty-seven-year-old Clint Johnson who lives in the village of Gardner in Rapides Parish has a job he loves almost as much as he loves deer hunting. He is owner of his own business, Cenla Wildlife Solutions, where he works with landowners to trap nuisance animals such as beaver, nutria and feral pigs. As a bonus, Johnson was eventually given permission to hunt a 400-acre piece of property in Rapides Parish by a landowner with whom he had been working.

“When I was finally given permission for me and a friend to hunt this property four years ago, I put out trail cameras to see what the deer population on the area looked like,” Johnson said. “One of the first bucks we found on camera was a very nice 10-point buck with approximately 120 inches of antler that my friend and I decided not to shoot, giving it a chance to see what it may grow into.”

A history of trail cam photos

That first year, the buck had a particular characteristic that enabled Johnson to recognize and set it apart from the other deer; the buck had a big cut in an ear which made him easy to follow.

“The second year, the buck had developed a split in each of his G2s and we decided if either one of us had the chance, we’d take him as he had matured quite a bit but we never got the chance,” he said.

Last year, Johnson became concerned when the buck disappeared from trail cam photos for two months; Johnson wondered if perhaps someone on an adjacent piece of property had gotten him.

“He was missing the entire months of December and January and then in February, I was driving down our main road and the buck was standing beside the road so I was relieved to know he was still around,” Johnson said.

“The powder or granular form is called ‘Manna’ and is 14% protein with a sweet smell; I’d never seen anything like it as far as deer loving it,” he said.

He was getting photos of the buck but all the images were taken at night; he was not getting any daylight photos. 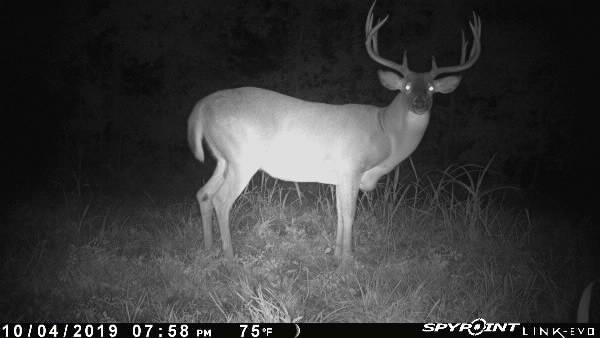 On Nov. 15, with the wind in his favor, Johnson picked out a spot on a hill that overlooked a small clearing with heavy brush on the opposite side from where he sat in a chair on the ground.

“I got settled into my chair around 4:00 that afternoon and I began hearing something in the thicket across from where I was sitting,” Johnson said. “I thought it was probably an armadillo when suddenly two does burst out of the thicket onto the clearing. The next thing I knew, a big buck stepped out at 30 yards. He turned his head and I saw the split G2s and knew it was him. I was shooting my 6.5 Grendel rifle and put the crosshairs on his shoulder and squeezed off a shot. The buck took off across the clearing and I was able to see him pile up about 50 yards from where I shot him. I kept my scope on him until I was sure he was down.”

The buck was a main frame 10-point with the split G2s giving him a 12-point rack. Inside spread was an impressive 20 6/8 inches, Main beams were over 24 inches each with bases of almost 5 inches. When he was put on the scales, Johnson was unable to clear the whole body as his head remained on the ground. Even then, the scale showed 200 pounds; Johnson estimated he may have weighed as much as 235 pounds.

Taking the buck to the LDWF office in Pineville, the antlers were measured at 171 inches of mass. He was estimated to be 6 ½ years old.