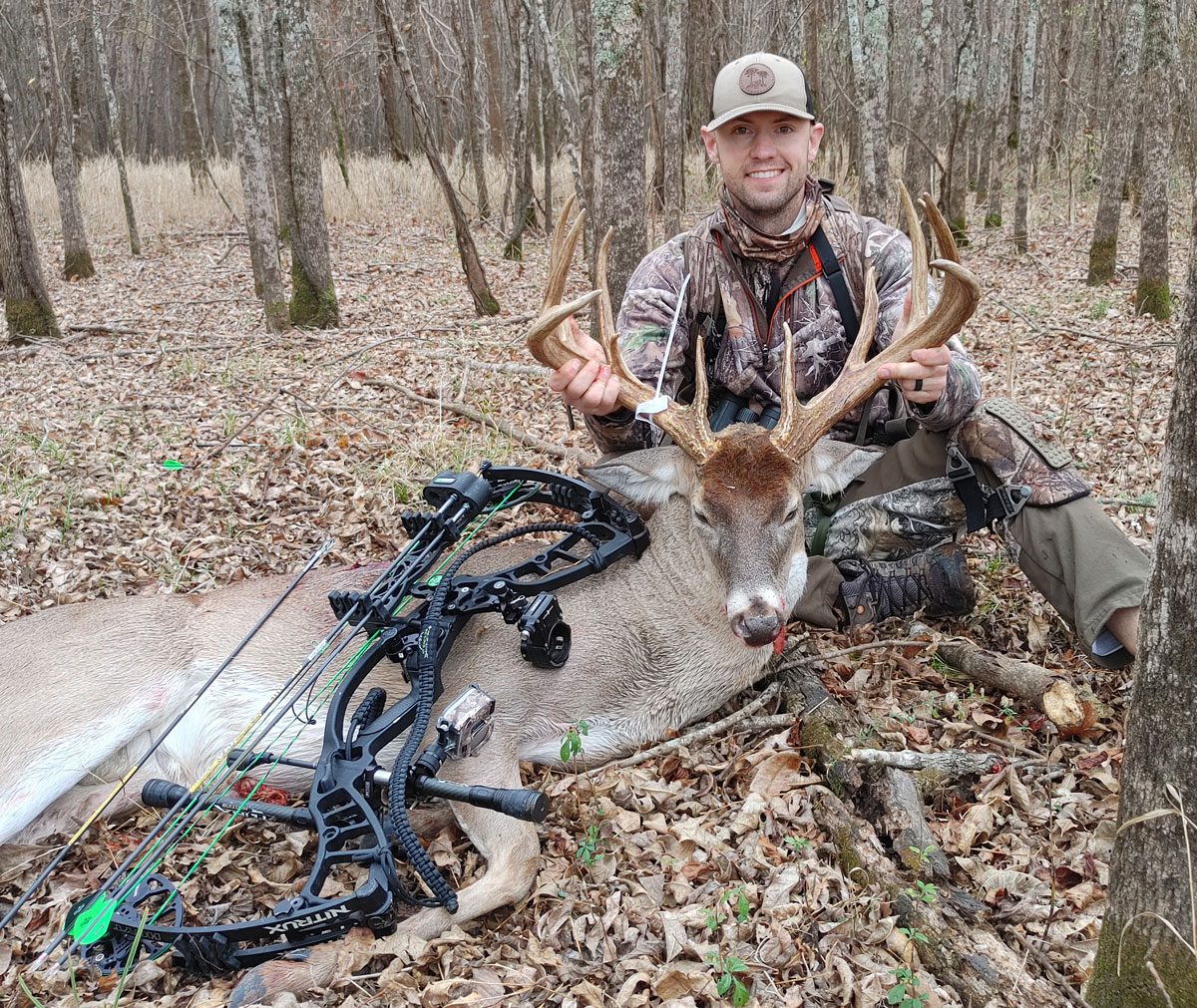 On Dec. 1, a hunter had shot at a huge buck in Caddo Parish. His shot only grazed the buck. On Dec. 9, Shreveport professional firefighter and paramedic Austin Tull found good fortune in his corner as he put an arrow into the big 12-point buck.

“The guy who first shot the buck earlier brought in a tracking dog and trailed the buck over a mile before giving up,” Tull said. “When word got around that I had killed this big buck, the hunter who grazed the buck heard about it, came over and when he saw it was the same buck, I thought he was going to throw up.”

Tull, age 36, was hunting with a friend, Luke Johnson, on Soda Lake Wildlife Management Area in Caddo Parish. The pair met at Tull’s home early on the morning of Dec. 9 with plans to head to the management area for a deer hunt.

“I had put out a camera last year and found this big buck and got photos of him,” Tull said. “I started getting photos of him in early November as the buck was working scrapes.” 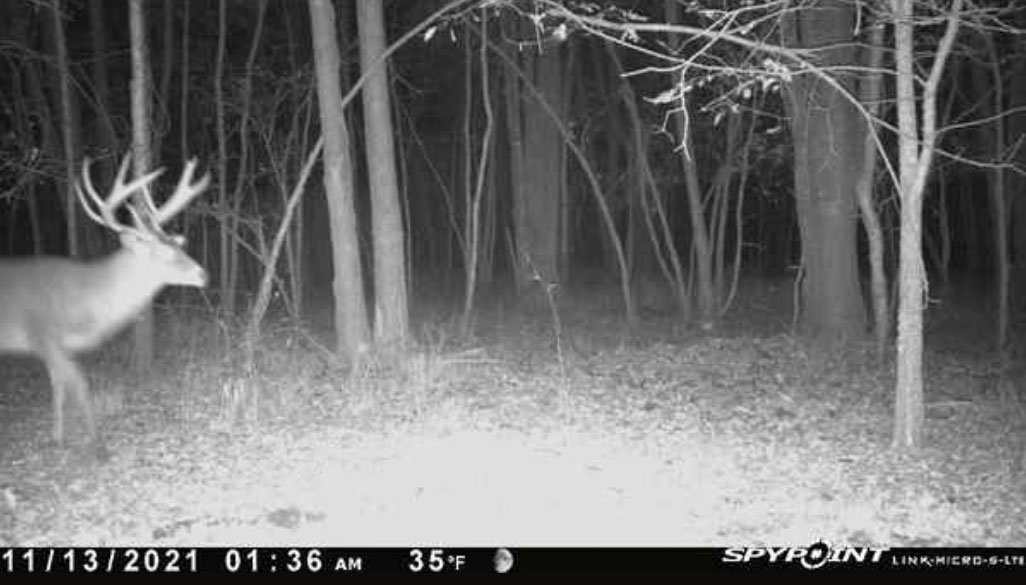 After stopping off for breakfast, the pair headed to the area getting there well before daylight.

“We parked and had a pretty long walk back to where we wanted to hunt,” Tull said. “Luke was set up not far from me and there was a particular tree where I wanted to climb and use my ‘saddle’ stand. One picture of the buck was a week ago when he walked right under my tree. I had shot at and missed a buck there earlier in the season. As I was only 15 feet up the tree, a doe busted me and the buck following her took off and I missed. This time, I decided to climb high enough to avoid being busted so I settled in at about 35 feet high.”

Tull had a view of fairly open woods, although the longest shot he thought he could take with his bow was perhaps 30 yards. Around 7:45, a doe came running by with a little 3-point buck on her trail.

“My buddy called me to tell me the pair had just run by him,” Tull said. “No more than a minute later, I saw something moving and made out the body, tail and an antler of a buck that was trotting along the trail where the doe and small buck had traveled. I picked up my bow and watched him, nose to the ground as he walked eight steps from the tree I was in.

“I stopped him with a ‘meah’ sound. He looked up and I prepared to shoot. There was a vine in the way so I had to lean back a bit and released my arrow. I watched him take off, I called my buddy to be on the lookout for the buck.” 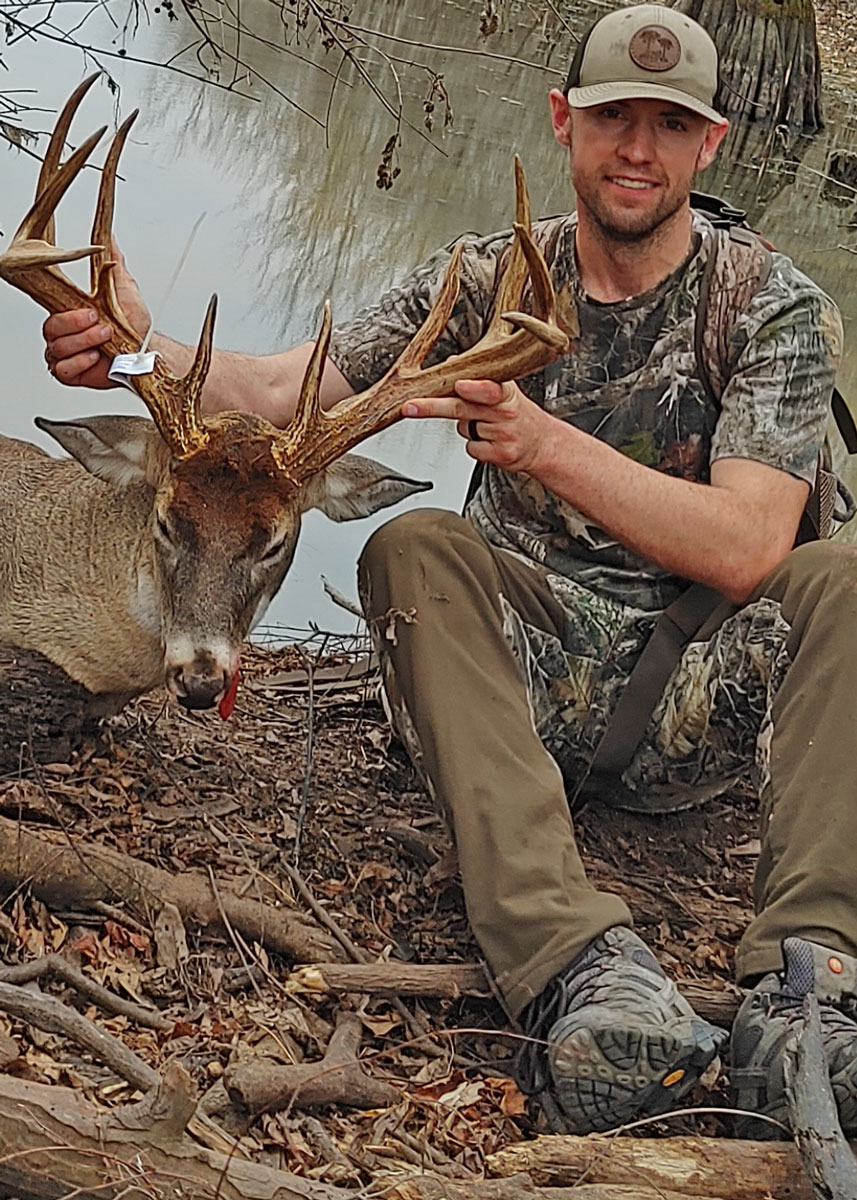 Laying aside his bow – Tull shoots a Hoyt Nitrux with Viper VAP arrows and Grim Reaper Pro Series broadheads – he picked up his binoculars and watched the deer as it ran, then stop, stumble and fall over 80 yards from where he was shot.

“My buddy got to him before I did and he yelled for me to hurry over because I’d shot a moose,” Tull said. “We hugged and high-fived when we saw just how big he was.”

The buck sported a heavy symmetrical rack of 12 points with a 20-inch inside spread. Bases were 6 inches each. The estimated weight was 185 pounds. Tull and his friend put a tape on the rack coming up with a score of 162 inches.

“Several other friends who saw the rack estimated it could have scored upwards of 180 inches,” Tull said. “I took the buck to Simmons Sporting Goods to have it measured and entered in that store’s big buck contest. It scored 164 4/8 inches.”

Confirming it was the same buck the neighbor had shot eight days earlier, the buck had a fresh flesh wound on its back.

Kendra Menard took down a 16-point trophy buck on Dec. 4 with her Tikka 7mm.08 while hunting with her son in Winn Parish. […]

Lane Cox was hunting at the Winter Quarters club in Tensas Parish when he killed a 13-point buck on Nov. 23. […]

Ross Wigginton, of Ferriday, harvested a trophy 17-point buck in his back yard in Concordia Parish on Nov. 14. […]

About Glynn Harris 438 Articles
Glynn Harris is a long-time outdoor writer from Ruston. He writes weekly outdoor columns for several north Louisiana newspapers, has magazine credits in a number of state and national magazines and broadcasts four outdoor radio broadcasts each week. He has won more than 50 writing and broadcasting awards during his 47 year career.