Cody Holmes, 31, berated himself for believing he had missed the biggest deer he had ever seen. Not once; not twice but a third shot gave little indication that his aim was true. Incredibly, all three shots from his Thompson Center .308 were on target and the buck only ran 15 yards after the third shot.

“I hunt on family land in East Feliciana Parish near Clinton and had been seeing this big buck on my trail camera since early December. but I only had night photos of him,” said Holmes, who works for Southern Power as a Transformer Division Coordinator.

If you live in Louisiana, you no doubt remember that on New Years Day, Jan. 1, the weather was unusually warm with high temperatures approaching 80 degrees. Instead of sitting and sweating on his deer stand, Holmes pulled on his shorts and decided to head for a pond on his property near where he lives in the town of Ethel to give the bass a try.

“The fish were cooperative and I caught a good bunch of bass,” he said. “The following morning, Jan. 2, it was still warm so I headed back to the pond to fish for bass.”

However, the weather was on the verge of a change to a forecast more appropriate for January and Holmes was aware that a significant cold front was approaching the area.

A change in the weather

“After fishing a couple of hours, I could tell it was starting to cool down so I left the pond, got my hunting gear and headed for my deer stand,” he said. “The change to cooler weather plus the approach of the New Moon for January got me thinking that maybe, just maybe, the buck that had been moving only at night might make an appearance during daylight hours.”

Soon after mounting his lock-on stand around 2 p.m., a stand that overlooks a food plot where a fall-winter mix had been planted, the cold front got cranked up in earnest with falling temperatures and winds beginning to pick up.

“The wind really started blowing and I felt like there was no way that deer would be out moving under such conditions,” Holmes said. “Then about 4:45, a single doe stepped out onto the food plot, milled around a minute or so and then left. Around 5:00, a couple more does came out and then I spotted about seven does coming onto the plot. The does were acting skittish like they were alarmed and I wondered if maybe a buck was in the area. Looking down the plot, I saw the buck I had on camera standing at the edge of the wood line.”

Afraid the buck might turn and head back to the woods, Holmes quickly got the scope on the vitals of the buck and squeezed off a shot. Nothing happened; the buck just stood there.

“I was afraid I had missed so I jacked another round into my rifle and fired again with the same result,” Holmes said. “He was still standing there so I got another round in and fired a third time. This time, the buck turned and ran back into the woods. By now I was a nervous wreck thinking I had just missed the biggest buck I had ever seen three times.”

By then it had gotten dark and Holmes made the decision to not go down and look for blood or a sign of a hit so he called his brother, telling him to bring a blood-trailing dog. 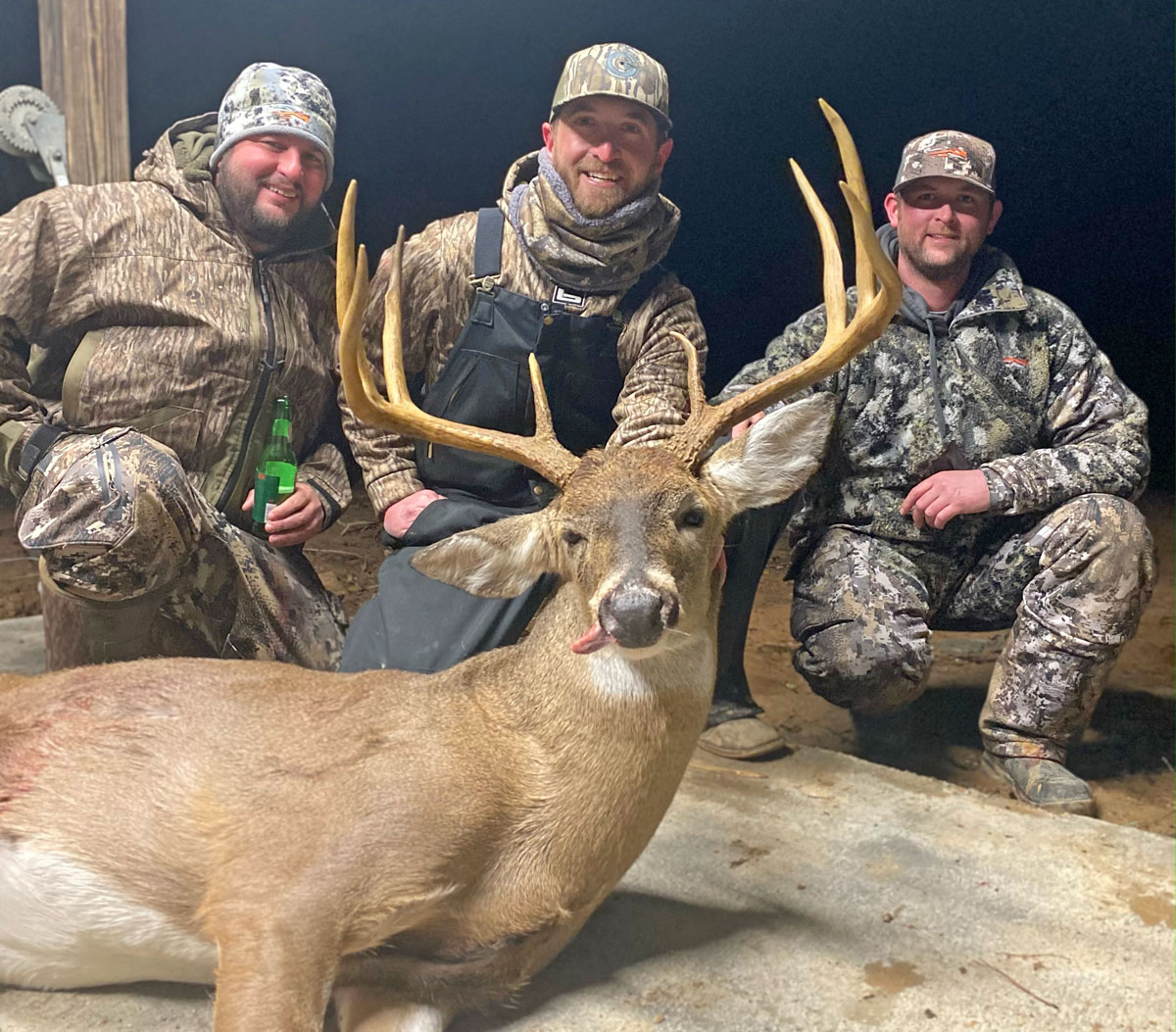 “I went back to my house to wait on my brother,” he said. “When he finally got there an hour later we went back to where I had shot at the deer, turned the dog out and the tracking job took only fifteen seconds; the buck had traveled only fifteen yards before falling.

“When we skinned the deer later, we found where all three bullets had hit the deer, any one of which would have been lethal. I think if I had waited before firing the second shot, he’d have fallen right there.”

The buck was a main-frame 8-point with an extra kicker giving him a total of 9 points. The buck weighed just over 200 pounds, was determined to be 5 ½ years old with lots of mass and an incredible 21 3/8 inch inside spread. The unofficial score of the rack was 153 inches.

Legends of the Outdoors – Warren Coco

Warren Coco, the Go-Devil inventor, has been able to turn his passion for duck hunting into his full-time job and livelihood. […]

About Glynn Harris 444 Articles
Glynn Harris is a long-time outdoor writer from Ruston. He writes weekly outdoor columns for several north Louisiana newspapers, has magazine credits in a number of state and national magazines and broadcasts four outdoor radio broadcasts each week. He has won more than 50 writing and broadcasting awards during his 47 year career.