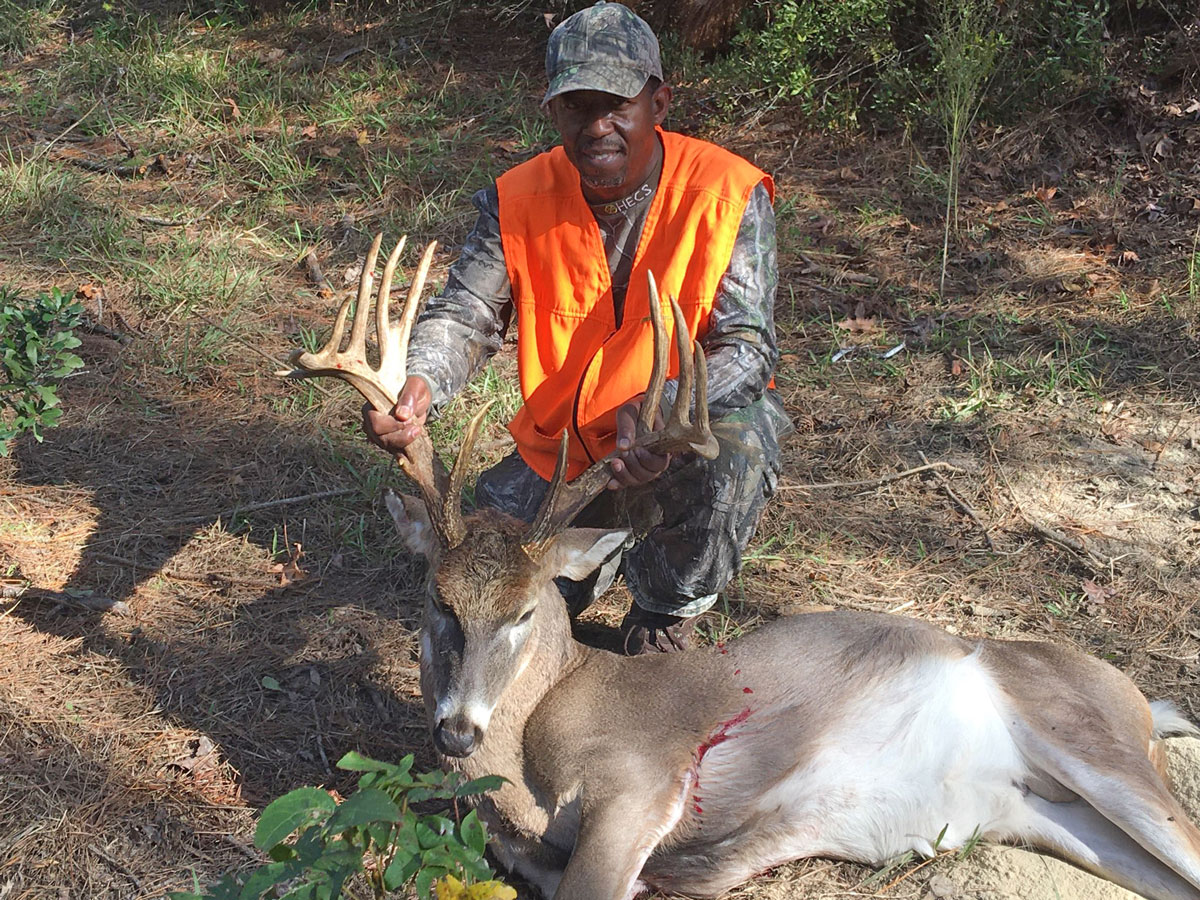 Fifty-seven-year-old Carlos Stewart of DeRidder had a pair of skittish does give him clues of why they were so nervous. Moments after the does fled the scene, a big buck, a deer Stewart had never seen, stepped out of the pines giving him the chance he was hoping for.

“I hunt on a 3500 acre hunting lease south of DeRidder in Beauregard Parish, a club where I had taken a nice buck earlier this season,” said Stewart.

Having established a Facebook page, Bucks of Beauregard, Stewart invites hunters in the area to send him photos of bucks they have taken and he posts them on his page.

“This gives deer hunters the opportunity to share their success at this one site and they seem to enjoy it. I know it’s something I enjoy doing and I have received lots of compliments from hunters whose big deer show up on my website,” he said.

On the morning of Nov. 20, Stewart downed a buck that earned a spot on the Bucks of Beauregard page, a deer other successful hunters admire and perhaps envy a bit.

“I went out to my stand early that morning and climbed aboard,” he said. “My stand is a box elevated a few feet off the ground and sitting in my stand I have two lanes where I have a feeder and rice bran on the ground. One stand gives me a view to the east while the other is open to the north.

At the last minute

The morning dawned with a heavy fog and by around 9 a.m. the fog had lifted, but the only movement he had seen from his stand were squirrels that were working on the corn on the ground beneath the feeder.

“I was getting tired and decided it was time to head home; I wasn’t seeing any deer so I started gathering my gear and making plans to leave since it looked like nothing was going to happen that morning” Stewart said.

Just as he was preparing to climb down from his stand, a doe darted out on his north lane and shot across in a hurry.

“I got my gun ready because I thought maybe a buck could be following her,” he said. “About that time, here came another doe that paused and then took off across the lane.”

Stewart had gotten word of a big buck on his hunting club as one of the members had images of a really good one on his trail camera. However, he had neither a picture nor sighting of the buck around the area he hunts.

“After seeing the reaction of these two does, I was on high alert when a buck with a big rack stepped out at about 75 yards from me,” he said. “As soon as I saw him and his impressive set of antlers, I took my eyes off the rack because I knew if I looked at them too long, I would really get shook up.”

Putting the crosshairs of the scope on his Thompson Center .270 behind the bucks shoulder, Stewart squeezed off a shot and the buck took off running straight down the fire lane.

“I sat there for probably 30 minutes regaining my composure before getting out of the stand and starting that way,” he said. “As I headed where the deer was standing when I shot, I pulled out my phone and set it to record. As I walked and filmed, I was thanking the Lord that even though the year 2020 had been such a terrible year, with me losing some good friends and hunting buddies, I was thanking God for giving me the chance at a buck like this. When I got to where the buck had been standing, I saw blood.”

Continuing on down the route the deer had taken, Stewart had covered about 65 yards when he looked up 30 yards away and saw a white belly. The buck was down for good.

The buck only weighed 155 pounds and was old, with teeth worn almost completely down, and was estimated to be at least 8 years old. Sitting atop his head was a massive rack of 13 points. Inside spread was 19 4/8 inches, main beams were over 23 inches each with four inch bases. Taking the deer to K and K Taxidermy in Reeves, the buck was unofficially scored as having an impressive 174 4/8 inches of antler.

Seldom seen buck shows up at right time for Saucier

Joshua Saucier dropped a big 12-point Allen Parish buck in it’s tracks at 60 yards late on the afternoon of Oct. 17. […]

Michael O’Neal got some help from his son, Wesley, to take down a 12-point trophy buck on Ashbrook Island. […]

About Glynn Harris 410 Articles
Glynn Harris is a long-time outdoor writer from Ruston. He writes weekly outdoor columns for several north Louisiana newspapers, has magazine credits in a number of state and national magazines and broadcasts four outdoor radio broadcasts each week. He has won more than 50 writing and broadcasting awards during his 47 year career.

How to retrieve a buzzbait