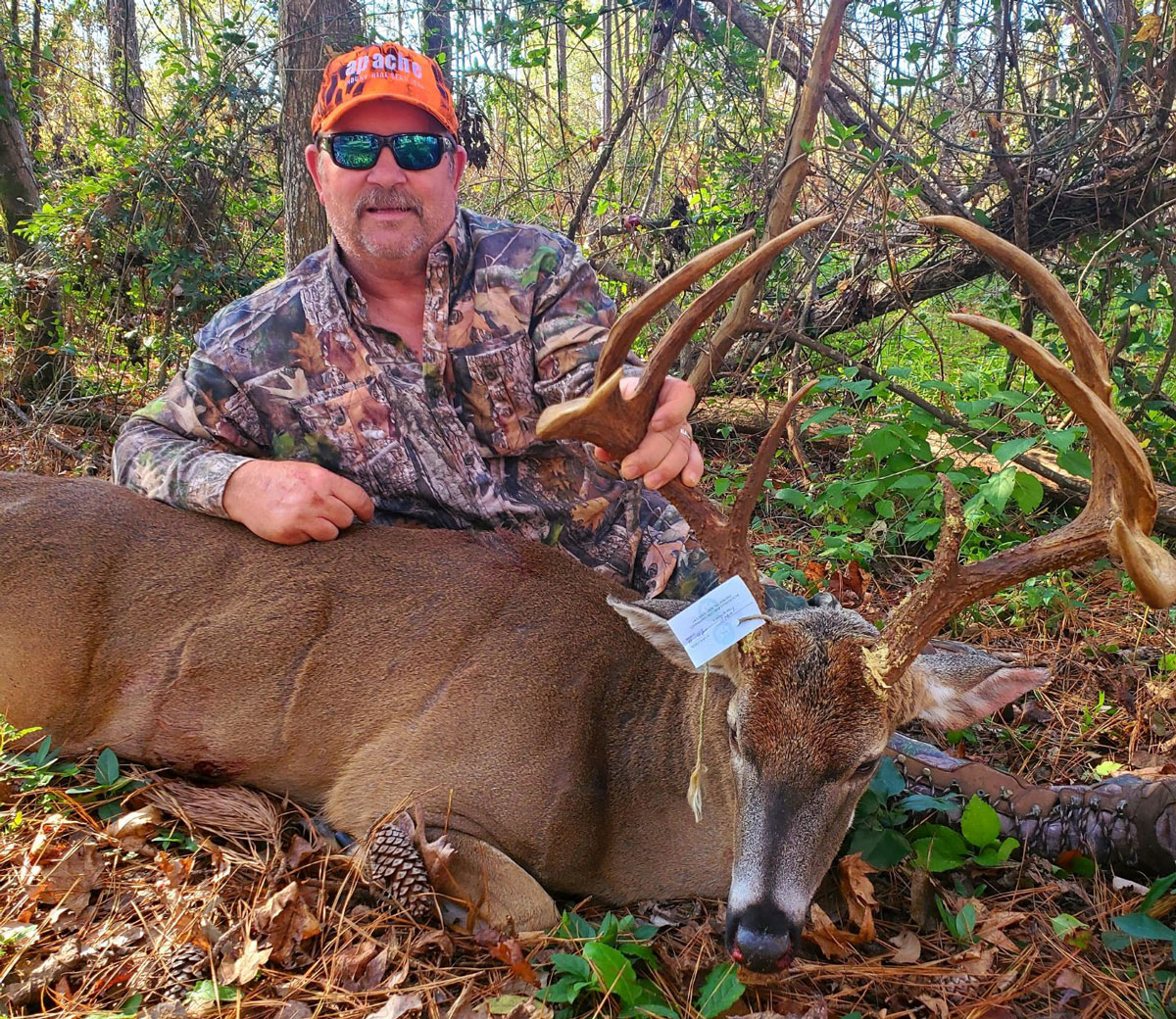 Fifteen years ago, not long after 55-year-old Teddy Dupuy started hunting the Kisatchie National Forest in Grant Parish, he found a holly bush that had a buck scrape on the ground beneath the branches. For several years straight, the holly has attracted the attention of amorous bucks.

“I had driven up with my wife this season and parked our camper at a parking area near Williana to deer hunt during the Thanksgiving holidays,” said Dupuy, who lives in Gonzales and works as operations manager for Apache Industrial Services.

“The hurricane that came through Grant Parish really tore up timber and I wondered what effect it might have on the woods I love to hunt,” he said.

Dupuy had always hunted the south Louisiana swamp land near his home until some 20 years ago, when a friend invited him up to hunt the Kisatchie National Forest. Falling in love with the rolling hills, he has driven up to hunt the area every year since.

Taking a clue from the buck sign and the trails leading out from the old holly tree, Dupuy began walking and looking, searching for more trails and buck sign. When he got to the middle of a 20-year-old pine plantation, he stumbled upon a fire break with lots of buck sign, rubs and scrapes along the opening.

“I decided then and there that this was where I was going to hang my climbing stand,” Dupuy said. “I hung it and hunted Saturday afternoon and didn’t see anything. I was back in the area the next morning before daylight riding my 4-wheeler for a ways and then walking in the last 700 or so yards to where I had hung my stand.”

Dupuy had mounted his API climbing stand some 25 feet up a big pine not only high enough to conceal his location but giving him a view of a couple of deer trails and a few openings in the pines.

“I had purchased a Wild Game Innovation Zero Trace unit to conceal odor and this was the first time I had used it,” he said. “About 7:20, I could see the large body of a deer about 80 yards in front of me. I could see it was a buck and I watched him work a scrape and thrash some bushes for several minutes.

“He was slowly making his way toward me and when he finally got to about 40 yards, I put the scope on my Savage High Country 30.06 on his shoulder and hit the trigger. The deer took off running and then stopped behind some bushes. All I could see was his rack as he stood there. I was starting to get nervous because there was no way I could shoot again when he just toppled over.”

The buck carried 8 points on his rack that had an 18-inch inside spread, 22 ½-inch main beams with long G2s and G3s and 5-inch bases. The buck weighed 195 pounds and was estimated to be 6 ½ years old and had rack measurement of 153 ¾ inches.

Teddy Dupuy has figured out a system of scouting that has resulted in his having phenomenal success with waylaying trophy bucks on public land.

“I hunt buck trails and do a lot of walking and some serious scouting looking for scrapes and rubs that enables me to locate where big bucks tend to hang out.

“I have enjoyed a measure of success,” he added “having downed three bucks measuring 150 inches or better here on the Kisatchie National Forest in Grant Parish over the past five deer seasons.”

Seldom seen buck shows up at right time for Saucier

Joshua Saucier dropped a big 12-point Allen Parish buck in it’s tracks at 60 yards late on the afternoon of Oct. 17. […]

About Glynn Harris 410 Articles
Glynn Harris is a long-time outdoor writer from Ruston. He writes weekly outdoor columns for several north Louisiana newspapers, has magazine credits in a number of state and national magazines and broadcasts four outdoor radio broadcasts each week. He has won more than 50 writing and broadcasting awards during his 47 year career.

How to retrieve a buzzbait