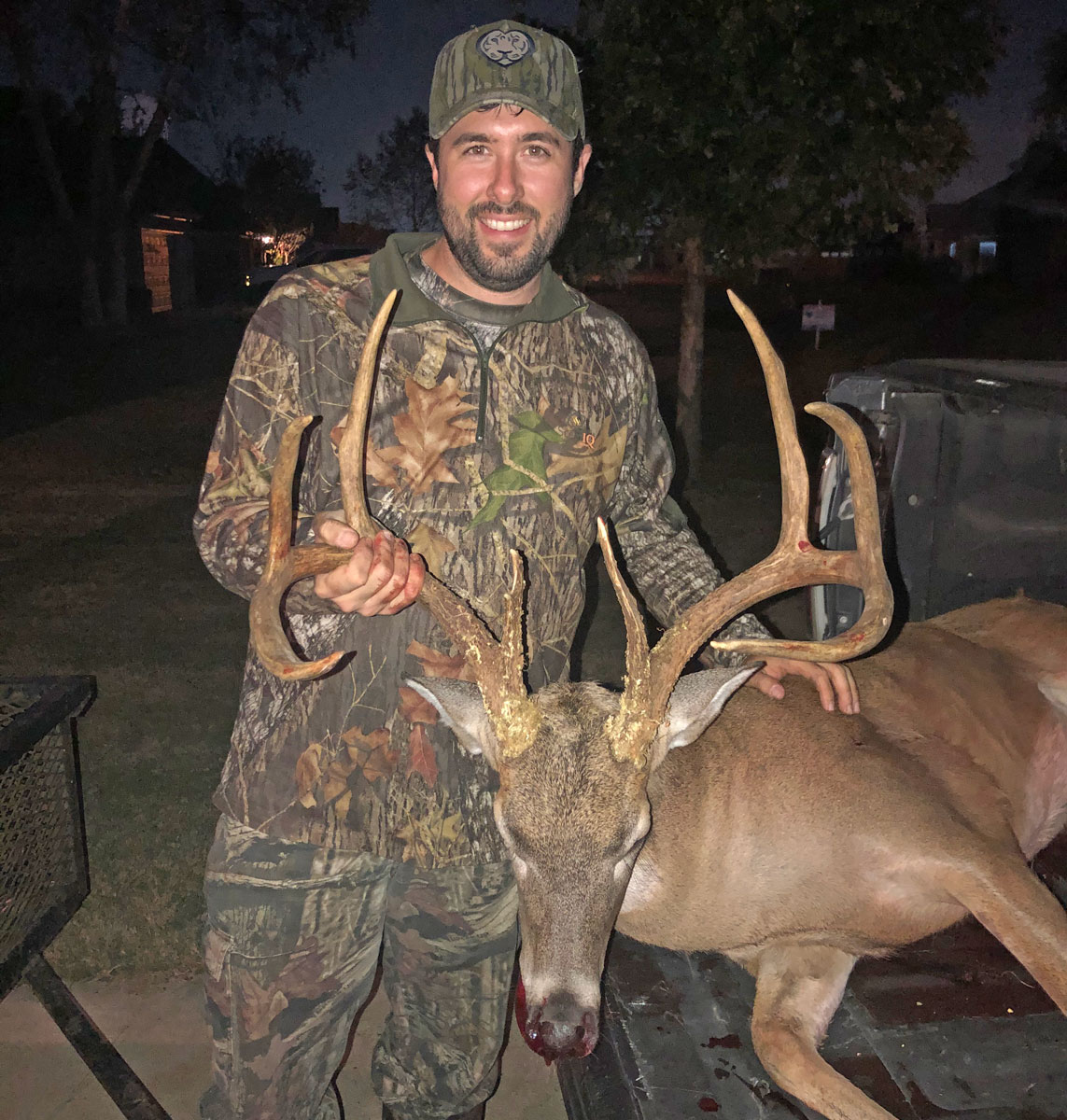 Cody Albritton, 34-year-old pastor at North Monroe Baptist Church who lives in Sterlington, was going through items his dad had left after he passed away in 2007. One of the items he selected to take with him on deer hunts was a can call hunters use to duplicate a doe bleat.

His dad had introduced him to hunting and had been his mentor as he was growing up. The can paid big dividends for him on Nov. 5 when an impressive 8-point buck came in looking for the source of the bleat. Albritton downed the 200-plus pound buck.

“I hunt on family land in Union Parish near the Conway community,” Albritton said. “We have 40 acres with other family land around our 40 I have permission to hunt.”

Two weeks prior to Albritton’s successful hunt, he had seen the buck’s photo on his trail camera. However, the photo was made at 3 a.m. and since he’d never had the deer on camera before, he wondered if perhaps the buck was just passing through. When the buck’s image appeared several times on more photos soon after dark, Albritton felt that the buck was hanging around on his family land.

“I decided to take the afternoon off that Tuesday and sit on my ladder stand to see if I might have a chance at this impressive looking buck,” Albritton said. “I got on the stand around 3:00 that afternoon and waited and watched until a little after 4:00. Then I thought about my dad’s old Can call, a call I had never used before so I decided to give it a try. I hit the call around 4:20 and 10 minutes later, I caught movement of a deer down in the hardwoods.”

Sitting on his stand, Albritton has a view down into a hardwood bottom adjacent to deLoutre creek that courses through the woods behind his stand.

“I could tell that the deer I was catching glimpses of was a big bodied deer,” he said. “Then I saw the head and the heavy rack and recognized it as the buck I had first seen on camera two weeks ago. I got my first glimpse of him at 40 yards and when he got to 20 yards, I decided to find an opening and take the shot.”

Settling the crosshairs on his 35 Whelan on the deer’s vitals, he squeezed the trigger and watched the buck, obviously hit, take off into the woods.

“I felt I had made a good shot and actually heard him crash down,” Albritton said. “I called my brother, Chris, who was in Indiana and told him I think it’s the big one and he’s down. I climbed down and walked about 30 yards straight to where I’d heard him crash and found him piled up. I took a photo of the buck with my phone and sent it to my brother and his response was ‘I can’t believe you even saw this buck and here you are holding him.'” 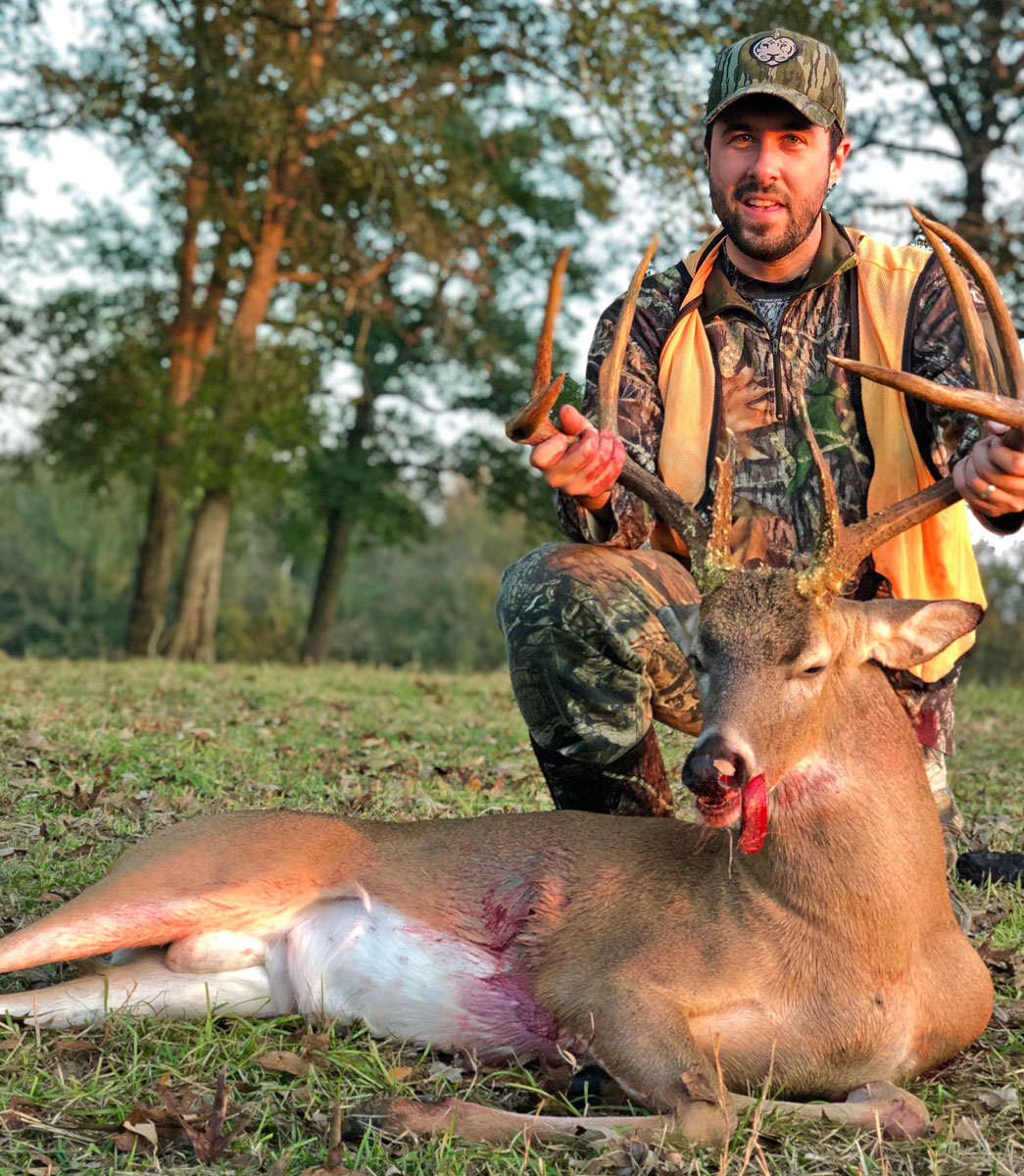 The buck was estimated to weigh more than 200 pounds and was judged to be 5 ½ years old. Inside spread was 19 inches with main beams stretching to more than 25 inches. Bases were almost 5 inches each and green score on his rack came to 150 5/8 inches.

“After showing the buck to my wife and three youngsters, I headed over to show it to my 8-year-old nephew, Brittain, who is getting into deer hunting. I handed him the can call, telling him I was loaning it to him to try and get him a buck but after season ends,” Albritton added with a chuckle, “I want it back.”