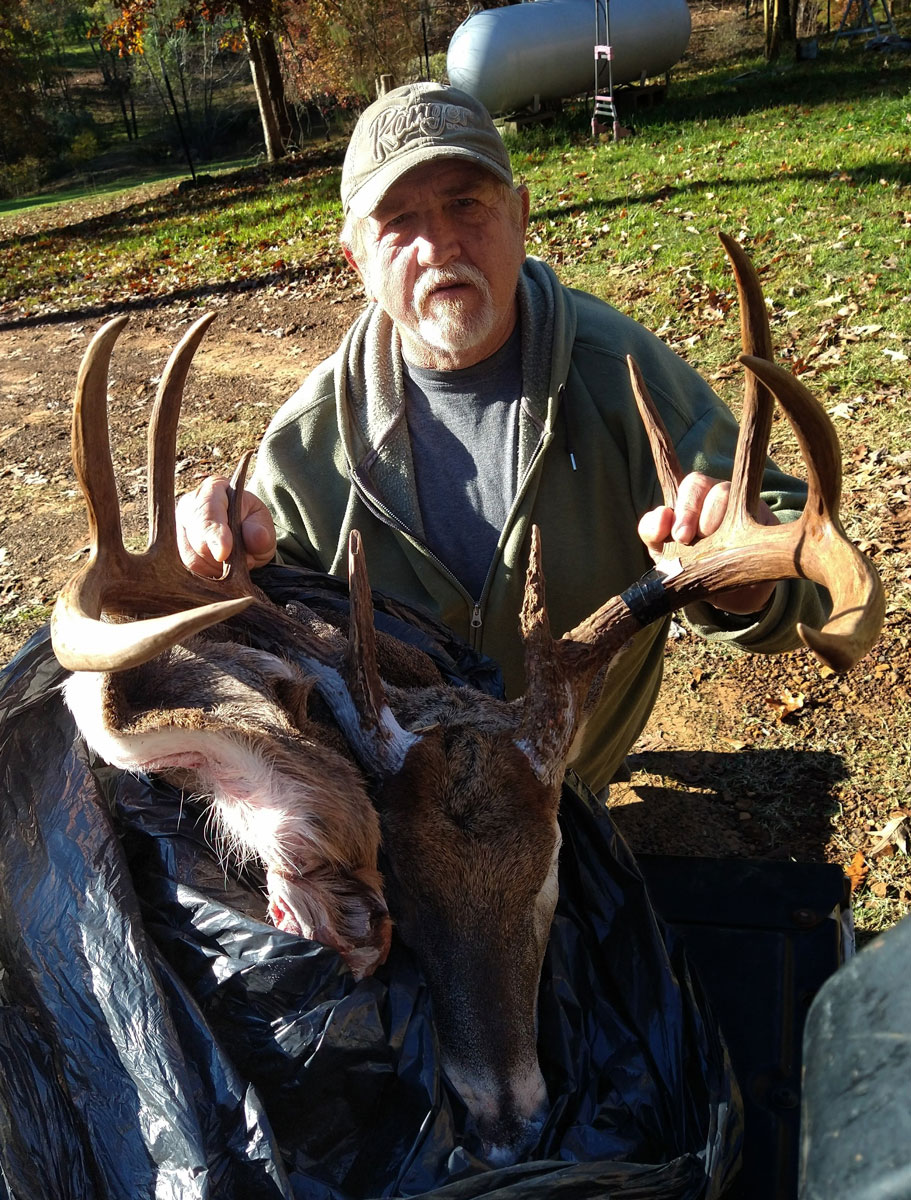 Much of Union Parish consists of woods that feature lots of pine timber. While there are plenty of creek and stream bottoms with big hardwoods, pines tend to dominate the forests.

Just north of the village of Truxno, there is a hunting club of some 3,000 acres that borders the Arkansas state line where much of the timber is pine with a large portion being land where the pines have been thinned or harvested. The result is that big bucks find this sort of habitat where underbrush growing up in the cutover land provides plenty of cover to protect and food to attract them.

Randy Wall, 60, is a carpenter who lives in Downsville and is a member of the hunting club where habitat conditions are just right. On Nov. 11, he found a big Union Parish 10-point buck in his sight picture.

“I had never seen or had indication of this buck being on the property until two days before I got him when I had nighttime pictures of the buck on my trail camera,” Wall said.

Arriving at the camp of a friend in the hunting club the afternoon of Nov. 11, Wall climbed into a box stand around 3:30 that afternoon. There are two shooting lanes out front of the stand and on one, Wall had placed rice bran and on the other, corn; he doesn’t use a feeder but just places feed on the ground.

“For the first hour and a half I didn’t see anything, but then around 5:00 a doe came out of the thicket onto one of the shooting lanes,” Wall said. “I noticed right away that she seemed skittish and kept looking back the way she had come.

“I had my scope on her – I shoot a Ruger .270 – when I saw movement at the edge of the thicket at about 125 yards. The doe took off and the buck I had seen on my camera stepped out. I said to myself, ‘oh, there he is’. I just moved my scope from the doe to the buck and squeezed the trigger and he hauled it out of there in a hurry.” 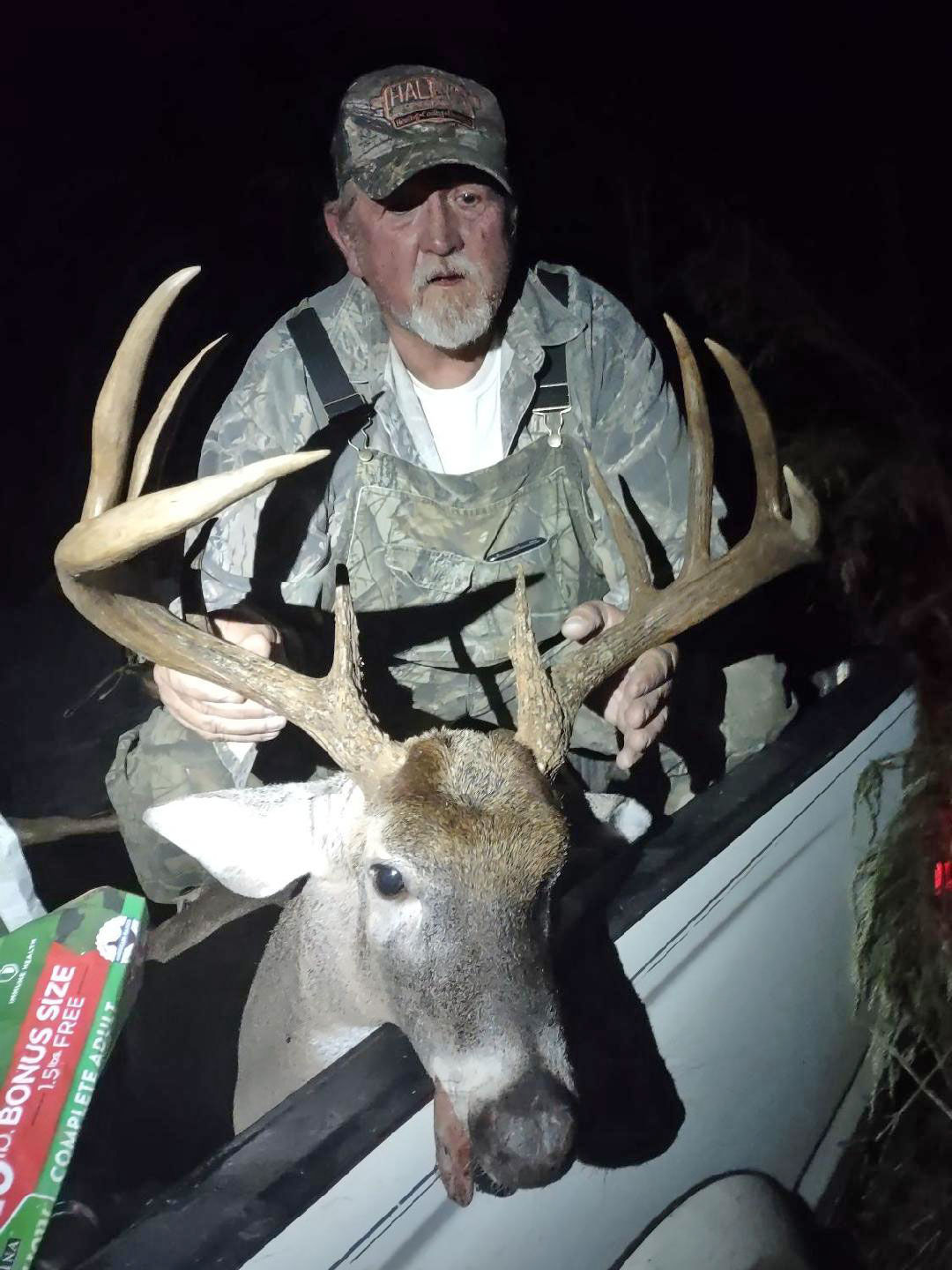 Since the hour was getting late, Wall climbed down from his stand a few minutes later and walked over to where the buck was standing when he shot.

“I found blood where he was standing and was able to follow the blood trail to where he was piled up maybe 50 yards from where he was shot,” Wall said. “As I walked up to him, I could quickly see there was no ground shrinkage. His rack was really incredible.”

The buck sported a heavy rack of 10 points with an inside spread of 18 6/8 inches. Bases were an impressive six inches each with the next measurement being four inches with five inch measurement further up the rack. Main beams were in excess of 26 inches each. Estimated weight was 220 pounds and he was aged at between five and six years old.

Wall entered the buck in a big buck contest held annually for bucks taken in Union Parish and he was scored at 169 6/8 inches of antler mass, a score that initially puts him in first place in the contest.

“I guess,” he said, “I was just in the right place at the right time.”

Bass are getting biologically ready for the spawn, which for the most part usually occurs in late January, February and March at Toledo Bend. […]

There is nothing better than a flavorful rib sticking meal with the star of the meal provided by duck season success. […]

Okuma’s new baitcast reel is their lightest and strongest offering yet. The Hakai DT is a reel that was literally built from the bottom up. […]

About Glynn Harris 441 Articles
Glynn Harris is a long-time outdoor writer from Ruston. He writes weekly outdoor columns for several north Louisiana newspapers, has magazine credits in a number of state and national magazines and broadcasts four outdoor radio broadcasts each week. He has won more than 50 writing and broadcasting awards during his 47 year career.