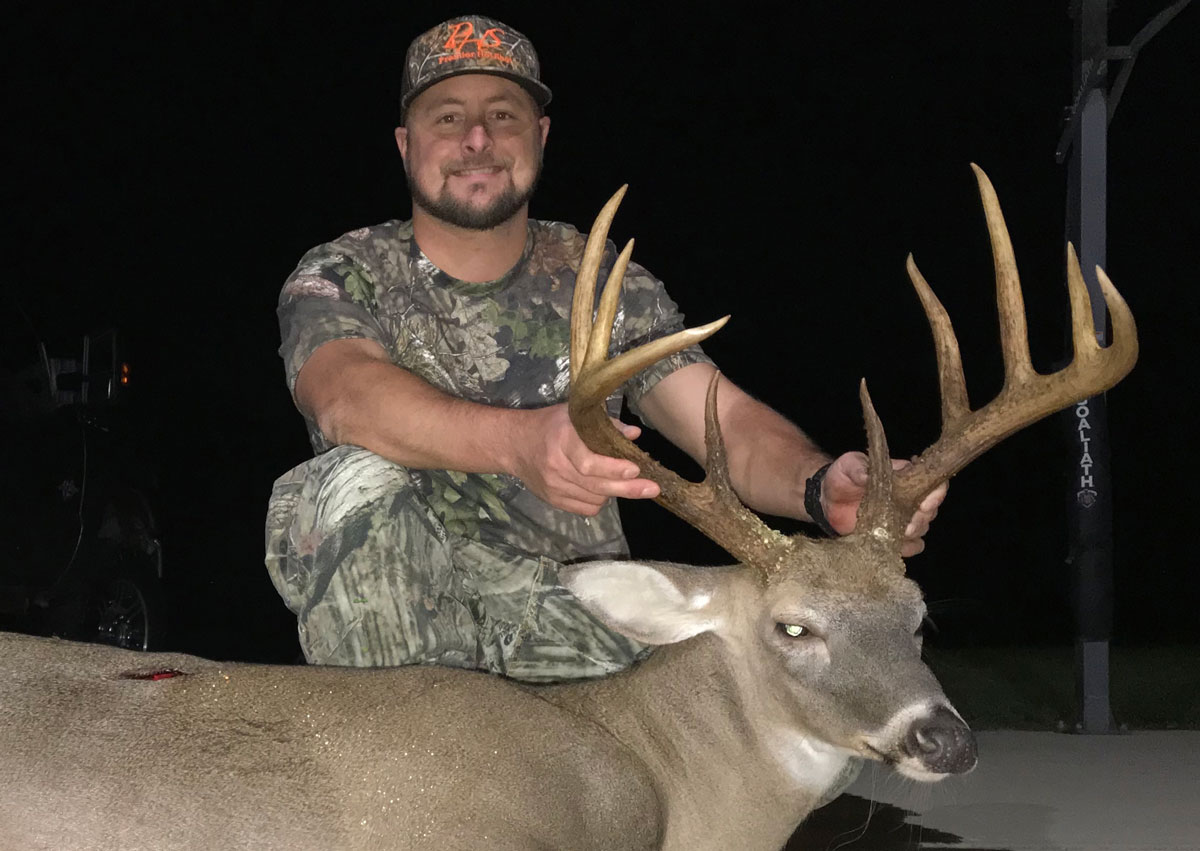 Matthew Hawkins of Denham Springs dropped a 10-point buck that scored 145 7/8 inches at 7 p.m., and 15 minutes later, Brandon Winters of Shongaloo slipped an arrow through an 11-point beauty.

Hawkins, 35, was hunting from a lock-on stand in some pines that he considered a staging area where his big buck would feed on acorns from a couple of standalone white oak trees while waiting for nightfall. After dark, Hawkins said, he believed the buck was crossing a nearby highway to go into a field to feed.

“I had (trail-camera) photos of him in a couple of different spots,” Hawkins said. “I had some photos of him in velvet, but after Sept. 8, he didn’t have any velvet. I didn’t have a lot of pics of him, but this spot was the most-recent spot where I had him on camera. I went in and had set up a stand.

“I didn’t hunt in the morning because the wind was blowing the wrong way, but it was better for the evening.”

Hawkins said a couple of does showed up about 6:30, and 30 minutes later, he said the buck “walked in and made a beeline to my salt block. He went right to it.”

The buck gave Hawkins a broadside shot at 25 yards, and he took it with his Mathews bow and Easton Axis arrow, tipped with a Rage broadhead. The shot was true, and it wasn’t long before he was standing over a trophy that featured a 16-inch inside spread, 9-inch tines and 21-inch main beams. The buck scored 145 7/8. 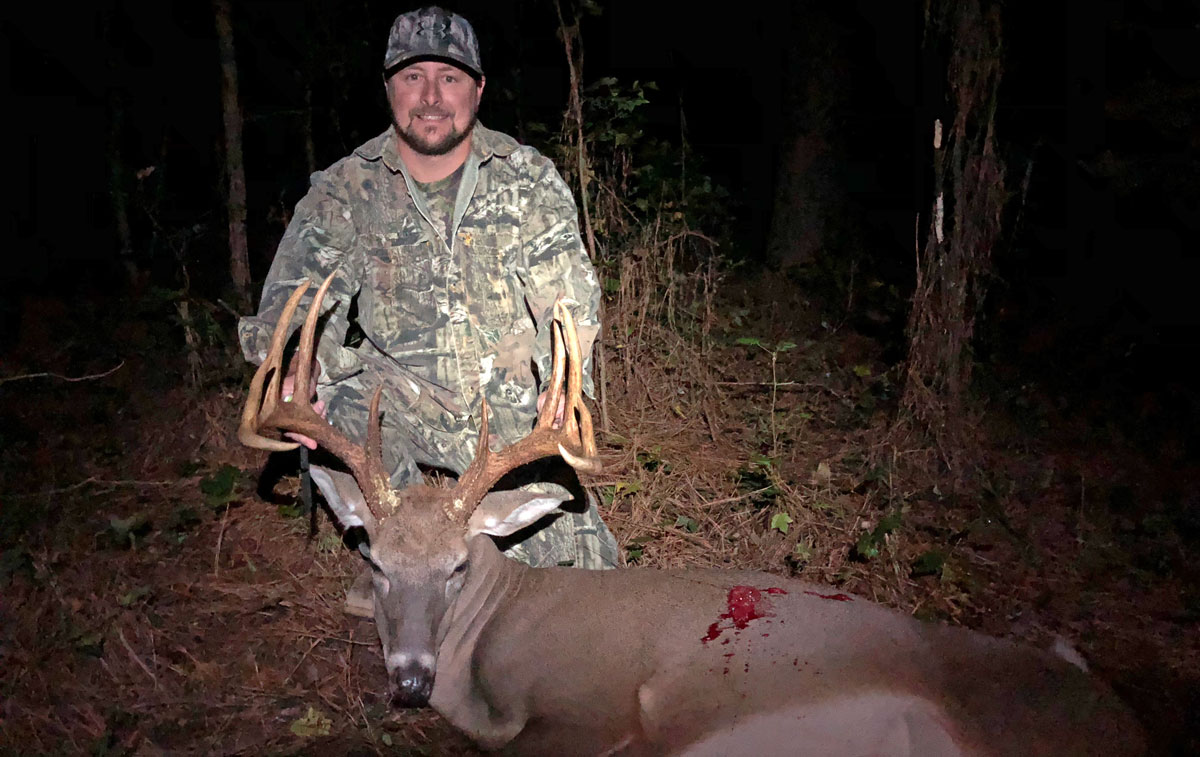 Meanwhile, Winters was waiting for a buck that had made tremendous strides since the previous season, when he had trail came photos of him.

“I had trail camera pictures of him this year and last year. Last year, he was a small 6; this year, he was an 11-pointer, with a split brow tine on the left side,” Winters said. “He was a little, bitty trash buck, but he blew up from that.”

Winters was hunting behind an old house, in an oak bottom next to a pond. The buck was regularly wandering in from a neighboring piece of property. 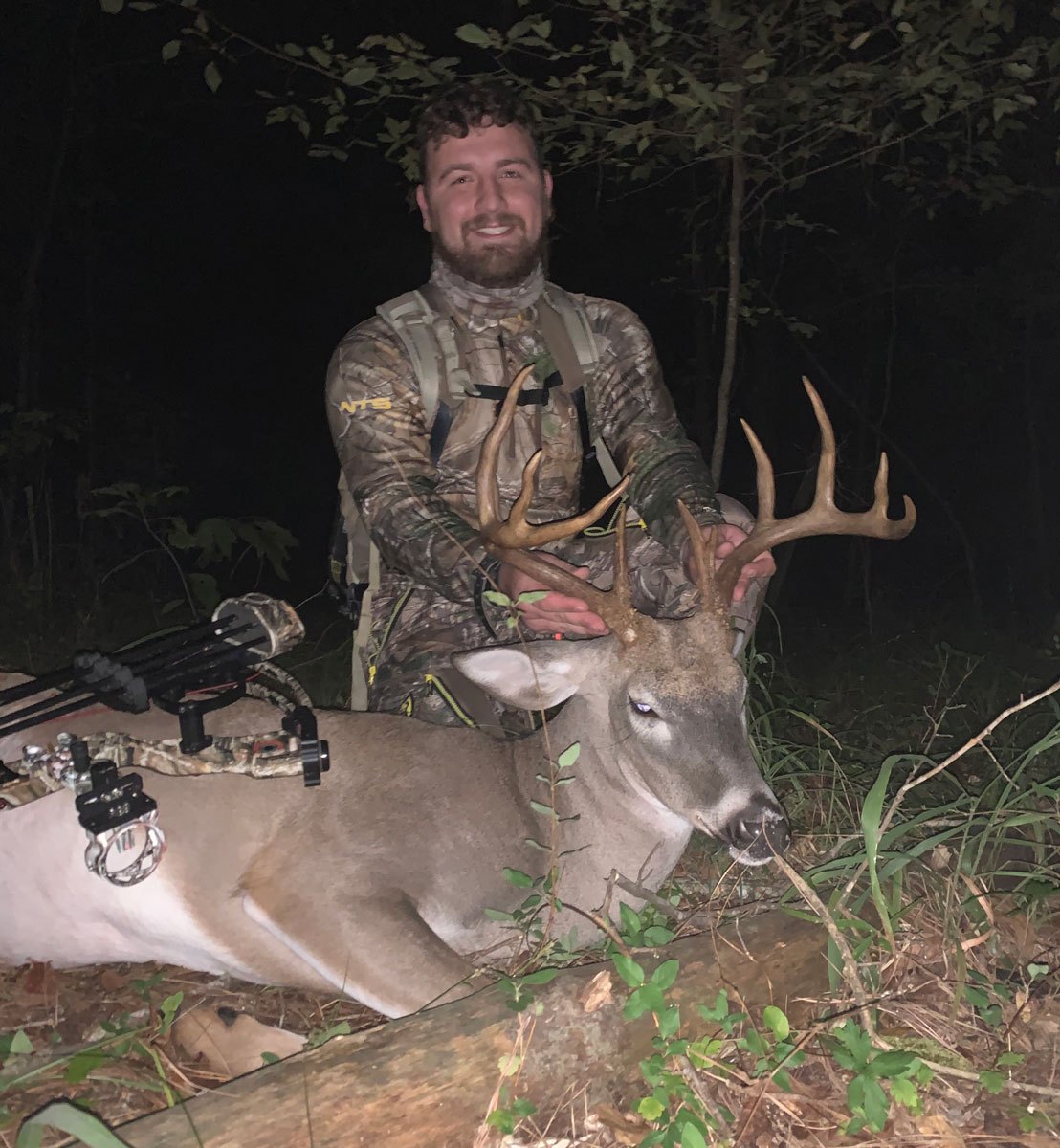 “The opening evening, he came in with two spikes,” Winters said. “He came off the neighbor’s place, right onto ours. He was watching the spike.

“When I started out, the wind was shifting all around, but when he started out, it shifted to perfect, where it was coming right from him to me. He went right to a feeder, and I watched him for a while, then he walked out. He was behind a tree, and I had to wait for him, but then he moved and gave me a shot.”

At 7:15, the buck gave Winters, 23, a broadside shot at 20 yards, and he took it with a Mathews bow and an arrow tipped with a Rage broadhead.

“I hit him a little farther back than I wanted to, but it cut an artery, and he only went about 50 yards,” Winters said.