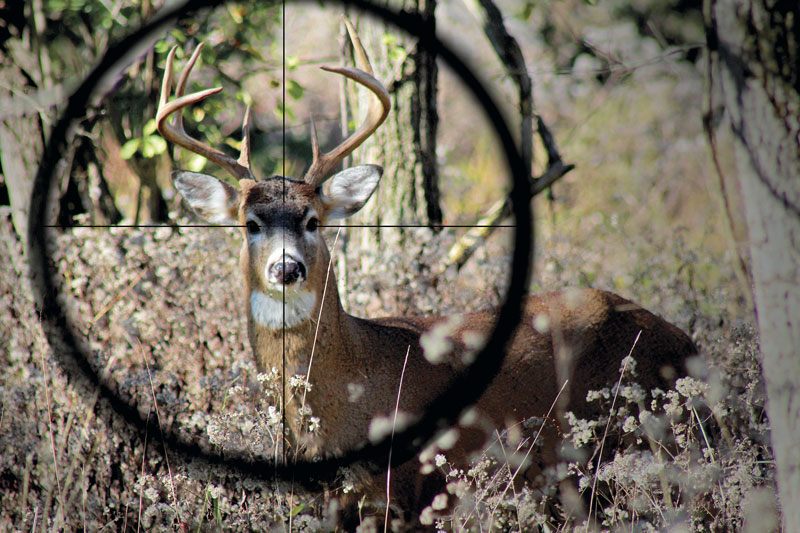 Rare occurrence in downed deer worth learning more about.

This past deer season was the worst I have experienced in several decades. Deer were as scarce as honest politicians, and I was only able to harvest one small buck.

That particular cool morning in December found me hunting near Dugdemona River in Winn Parish. The deer stopped about 60 yards away, and I made a head shot through an opening in the bushes with my 30-06.

I quickly field dressed the deer, loaded it up and called my cousin Clay Scoggin, who wanted some deer meat. We had it butchered within two hours and he headed home happy.

A few days later, Scoggin called and said, “I had to throw away most of that deer meat because the shoulders and hams were full of little blood spots. It looked like it had been shot with bird shot. When I cut into it, I discovered the spots were small areas of ruptured blood vessels throughout the quarters.”

Scoggin is an inquisitive sort of guy, so he started looking into what had happened to the meat. After talking to some biologists, veterinarians and other professionals, he learned that it was a rare, little-known phenomenon called “blood splash.”

I got in touch with Rusty Berry, assistant state wildlife veterinarian, and Brian Miller, assistant director of the Louisiana Department of Agriculture & Forestry, to learn more about the weird occurrence.

Berry informed me that he only sees three or four cases of blood splash per deer season. “They are all head shots, usually from less than 75 yards, with high-powered rifles.”

As Berry explained, “The cause of blood splash is still under investigation, but most likely it’s caused by a quick and unusually large rise in blood pressure which results in the rupture of blood vessels.”

Miller does not come into contact with deer carcasses in his job, but he does know of similar blood splash cases in hogs and cattle. He believes blood splash may be related to blood remaining in the muscle tissue because of improper bleeding.

Depending on bullet placement, a head shot may destroy the brain but not rupture the major arteries and vessels in the lower skull, and, thus, bleed very little. That apparently is what happened with my deer.

My research also led me to Hein Nell, a veterinarian manager for the Agency of Food Safety and Quality in South Africa. He agreed that a spike in blood pressure is behind the blood splash phenomenon.

“We very rarely encounter blood splash in African wild game animals, but from the little that we know, we have seen that it is most often associated with increased stress levels during hunting,” he said. “In other words, if animals are excessively chased during the hunt, they do tend to show more blood splash in the muscles.”

Nell added, “In South Africa we only allow head shots, for food safety reasons, during what is called ‘wild game harvesting’ for meat for export to the European Union. But then the throat bleeding cut or heart stick preferably needs to be performed within sixty seconds after the shot. This is probably why we do not see much blood splash at all. I suggest you bleed the carcass as soon as possible to avoid this.”

Miller tends to agree. “I lean more towards the blood remaining in the muscle tissue due to improper bleeding. A long interval between kill and exsanguination can leave a carcass with more blood in the tissue.”

“Perhaps the reason why hunters experience this more often with head shots is that a shot to the neck or body is more likely to bleed profusely, giving a quicker start on the complete bleeding out process.”

Miller does not believe the caliber of the rifle or distance of the shot causes blood splash other than the hole it creates to facilitate bleeding. “If the cause really is some final stress shock to the system by the brain that causes the heart to pump hard enough to burst the capillaries, then I would want to see a lot more examples to be able to draw any reliable conclusions.”

Cousin Clay Scoggin only found evidence of blood splash in the four quarters, but that is not always the case.

Miller speculated why the blood splash only affected my deer’s quarters.

“My guess is that they are large muscles that take longer to bleed out,” he said. “If the effect is due to burst capillaries from a final brain or heart response, then it may be related to a more intense pressure from the flexing of those larger muscles at the moment of death.”

Regardless of what causes blood splash, both Berry and Miller recommend not eating the meat.

“We follow the ‘when in doubt, throw it out’ rule,” Miller said. “Without an expert disposition, you’re better off tossing it. There are possible pathogenic causes that I would not risk my health or the health of my family over in order to save a couple of quarters. Ecchymosis, Hemorrhagic Diathesis and the like could be symptoms of any number of viral diseases that may be harmful to humans. If the blood splash is pervasive throughout a large part of the carcass, skin or involving any organs or lymph nodes, I wouldn’t even consider keeping the meat as it raises the likelihood that it is due to widespread infection.”

So, there you have it.

If you ever find small blood spots scattered through the meat of your deer or hog, play it safe and get rid of it.

Tony Crader was hunting on the Alexander State Forest when he took this buck on Oct. 9, 2022. […]

About Terry L. Jones 93 Articles
A native of Winn Parish, Terry L. Jones has enjoyed hunting and fishing North Louisiana’s woods and water for 50 years. He lives in West Monroe with his wife, Carol.