Bow season is fast approaching. Follow this guide to make sure your stands are in the right places and your aim is absolutely perfect.

At the conclusion of last deer season, it was obvious that I would do whatever it took to hunt the archery season this year. Deer that had been so outgoing as evidenced by cameras for all of October and the first half of November suddenly disappeared from daylight come Nov. 21. One particular spot that I first started hunting last year is a pinch point where deer traveling from a river bottom to a feeding area have no choice but to walk right below my stand. And that’s exactly what they did up until Nov. 20.

A trail cam showed that deer passed this stand at all hours of the day during the early part of bow season. The only problem was that I wasn’t in my stand with a bow. And a friend told me one day at church that he typically goes from seeing 12 to 15 deer per hunt during bow season to maybe one or two during rifle season.

Another friend who only bow hunts told me that the deer in his father-in-law’s backyard are a perfect example. During the weeks leading up to last rifle season, an 8-point buck freely patrolled the back of this yard. He disappeared during rifle season, but magically reappeared the day after rifle season closed.

All of this obvious evidence was enough to push me past the tipping point this year. I made up my mind that I was going to hunt the archery season, and my plan was to get a crossbow because I had convinced myself that I was too busy to put in the time to practice with a stick-and-string bow.

Some snobbery from my brother-in-law and this passage in an archery company product catalog convinced me to pick up the stick-and-string instead of the crossbow.

“Bowhunters are the real McCoy,” it began. “Genuine woodsmen that don’t care if their belts don’t match their boots or if the paint on their truck has a few scars.”

I found myself in this promotional passage.

To get my feet wet, I dropped by Louisiana Outdoors just off the I-59 Spur exit in Pearl River to test shoot a few bows. However, the owner Brad Ripp did more than show me a few bows. He sat down and listened to my questions about bow hunting in general.

How do I pick a stand site? How much do I have to practice? How do I get a deer close enough to shoot with a bow and arrow? How do I get started? 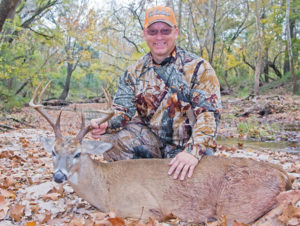 Ripp actually breaks down his scouting into post-season and pre-season. And he was quick to point out that where deer are in the summer and early fall isn’t necessarily where they will be during the late season and during the rut.

“Early season tactics should revolve around food sources and water,” he said. “But whether it’s early season or the rut, I’m still going to hunt the same areas, just not the same spot within that area.”

Since Ripp is mostly concerned with a big set of antlers, that’s how he approaches his scouting. He keeps his eyes open for big rubs because only big bucks make big rubs. According to Ripp, big bucks and small bucks will rub a small tree, but only a big buck will rub a big tree.

“They’re easy to find during the rut and post-season,” Ripp said, “but you’ve got to be looking for them rather intently to find them during preseason scouting. As a tree heals up in the spring, it may look like a very old rub, but there’s a good chance it was made just the past year.”

In the area where Ripp hunts, which is the swamps and public lands around eastern St. Tammany Parish, he also looks for white oak and cow oak (swamp chestnut oak) trees that look like they are going to produce for the season.

Scouting in Southeast Louisiana got a lot more difficult in 2005 because all of the overstory blown down during Hurricane Katrina allowed thick understory to fill in the gaps. This made traversing the terrain to old, familiar areas difficult if not impossible.

“I had to start from scratch,” Ripp recalled. “Downed trees and a practically impenetrable undergrowth of briars made the task of scouting downright grueling. Therefore, my first task was to look at satellite imagery on the Internet to find those places that looked a little harder to get to than others.”

To complain about impenetrable undergrowth in one breath and to say that he looks for places that are hard to get to in the next sounds a little contradictory. However, Ripp says he hunts almost exclusively by boat, so when he finds a spot that a walker can’t get to he knows he’ll have it practically to himself.

Ripp looks at rivers and creeks and searches for areas just off of both that aren’t easily accessible from any other direction. If the river has many curves in it, he looks for spots on the inside curves.

“This way, the deer to the north and south, where there might be a good-sized chunk of land jutting out on a peninsula, kind of get funneled to you as they skirt the river,” Ripp explained. “Once I find an area like that, I look for some sort of topographical relief or timber edge that provides access to a spot without me just pulling up on the point and pushing deer off of where I want to hunt.”

Big, acorn-bearing white oaks make spots like this even better. But the real trick, according to Ripp, is to find a spot like this that is all by itself. You don’t want to be able to pull up to every point on the river and be able to duplicate the same kind of spot.

“If there are stands of oaks in the area, you’re really not on to anything special,” he added. “But if you can find that one stand of oaks with nothing better within a half mile around — well, then you’re onto something.”

When picking a stand site for bowhunting, Ripp doesn’t care about his field of view for any great distance. Rather, his goal is to be in a place that, if he sees a deer, it’s likely to be within 20 yards of him.

“Overlooking a big opening may allow me to see more,” he said, “but I’m not going to get nearly the number of deer within shooting range as I would sitting in a tight spot.”

Ripp likes to select stand sites that have two things in common — thick bedding areas and choke points. For example, one of his favorite spots is positioned in a 100-yard stretch between a creek and the edge of a swamp.

He knows that any deer moving in that areas is going to be necked down to within 100 yards. That means he only has to pick which side of the choke point he’s going to hunt. This particular spot has a big white oak growing on one side that is just full of acorns.

“I’m betting that when deer travel this corridor, they’re going to take the path that leads under that tree,” he added. “I’ll only be able to see about 20 or 30 yards, but that’s all I need, and I’ll have a shot when one walks by.”

But there is a lot more to selecting stand sites than just picking a tree in a choke point and climbing up. Ripp pays particular attention to how he’s going to access the stand so that he doesn’t ruin a spot.

Ripp is adamant about paying attention to how he enters his stands, especially if he’s hunting something like a creek that provides a travel corridor. If at all possible, he never walks the trail on the side of the creek that he will be hunting.

“I either find a log to cross adjacent to the creek, or I bring in a small boat and chain it up or hide it,” he explained. “This way, I’m not alerting deer from either direction along the creek. I don’t worry at all about messing up the side I’m coming from. If anything, stinking it up is OK. Make them think the bad humans are on that side, and slip across into your stand.”

Although he doesn’t care about stinking up the side he used to come in, Ripp is persnickety about keeping it clean once he’s on his stand side. He even trims low-lying branches and bushes in the last 100 yards to his stand in an effort to keep scent down.

“It’s not all that warm during the early bow season,” he joked. “It’s downright HOT! We sweat on our way in to a stand, and any time you reach out to push a bush or branch out of the way leaves your scent all around your stand. I do everything I can to try to beat it or at least minimize it, but leaving scent on your trail is a big obstacle.”

Ripp isn’t afraid of hunting a big buck in its own bedroom. Granted, he doesn’t do this as a first option, but when he’s tried everything outside a big buck’s bedroom with no success, he figures he has nothing to lose by going in and giving it a shot.

These staging areas are usually close to bedding areas. These are the kinds of spots where bucks get up and walk around killing some time and stretching their legs after a nap and prior to heading off into the woods.

“I saw this firsthand several years ago,” Ripp recalled. “I was hunting a rub line that came out of a clearcut and went into some open oak woods. I hunted a buck on this line for several weeks but never got a shot. I didn’t want to disturb his bedding area, but I had no choice.”

Ripp snuck down in the bedding area and found rub after rub in the thick brush. He hung a stand, and from this spot, he watched this buck a full hour before dark just walking around rubbing trees.

“Just as it got too dark to see, I could hear him crunching sticks as he made his way into the open woods,” Ripp added. “One time, he took the route to the woods that was under my stand.”

It was then that all of his scouting, all of his location and stand selection, all of his covert operations to get to his stand and his willingness to hunt a buck’s bedroom paid off.

Brad Ripp is the real McCoy.