Aside from patience, the art of listening may be one of the best talents that a deer hunter needs. This Louisiana preacher has learned plenty from veteran hunters, and he’s got plenty to share.

Many things can be done to gain an advantage when deer hunting.

Spending a lot of time in the woods, having access to the best property available and just having a natural knack for being in the right place at the right time are a few.

But some might say Rubin Weaver of Farmerville has an unfair advantage. You know, connections. Powerful connections.

“Yeah, all we have to do is just pray for a big deer and go out there, and it happens,” says Weaver, pastor of the Antioch Baptist Church in the Union Parish community. “I wish it was that simple, but it’s not.”

Actually, he does have some connections that help: he gets to hunt on land belonging to a church member’s family. But the rest of it? He earns it the old-fashioned way like everybody else, and that includes a huge dose of something he doesn’t have naturally: patience.

“There’s no doubt in my mind that patience is the most-important part of being a consistently successful deer hunter,” said Weaver, 36. “It’s hard for me. I’ve from that undiagnosed ADHD generation, and it’s a struggle.”

Modern innovations like game cameras have really helped, he said. It’s a lot easier to be patient on a deer stand when you’ve seen photographic evidence of what is out there. When you know an big one is around, you can stick it out and wait.

Doing something else has helped him. Preachers are known mostly for talking, but Weaver said listening taught him to be a better deer hunter.

“I started preaching at 20, and I had my first church ministry when I was 22,” he said. “I’ve spent a large part of my adult life sitting around the coffee pot with men two and three times my age, talking about deer hunting. I found out early that a lot of it was ‘smoke’, but once you filter that out, you can learn something from every one of them.”

Weaver began deer hunting with his brother in Webster Parish. In those days, many hunters ran dogs, found a stand around a clearing or the edge of a road and waited for deer to come out ahead of the dogs. One of those early dog hunters taught Weaver one of his most valuable lessons.

“There was one old man in Athens named C.J. who had the best dogs around. Once a year, he would turn them all out, and everybody that hunted would find a spot in the area and hunt,” Weaver said. “He had deer horns all over at his place, and he always had good advice. One time, he told me the best thing I could ever do to kill deer still-hunting was to let those big bucks pattern you. Then, you could change what you were doing and surprise them.”

That is the opposite of what most hunters do.

“When I’m going in the woods to feed, I always go the same way, at the same time,” he said. “I go the same route; check my cameras at the same time. I do everything where the deer can pattern me. Then, when I start seeing good ones on the camera, I do it totally different. I come in at a different time from a different route; and if I have been riding, I change to walking. I let the deer figure me out, then, when they do, I throw them a curve and do it differently. It has worked out well for me.”

The other major key to Weaver’s success is using trail cameras. They let you know what you’ve got — even if you only see the deer at night — they give you confidence about where to hunt, help you determine which deer to shoot and which to let walk. But that, too, has an exception.

“The big 8-point that I killed last year that won the Union Parish Big Buck Contest had been showing up on my camera for three years,” Weaver said. “The first year I saw him, he was the only antlered deer that I saw in my photos, so I decided I would shoot him if I got a chance. I didn’t. I never saw him a single time in the daylight. That continued for three years until finally, when he was five years old, I got photos of him in the daylight. I was there the next day, and he was, too.”

Weaver also is a stickler for equipment to the point of being, he admits, picky.

He shoots a Browning .300 WSM bolt-action rifle and 155-grain, Browning Rapid-Expansion bullets. He has started hunting more out of a ground blind; his favorite is a Baronet blind that has room for both he and his son to comfortably hunt without having to climb a tree. In fact, it was in that blind that his son, Jachin, killed his first buck last year, at age six, with a crossbow.

“I’ve used all sorts of cameras, and every one of them has had photos on the card with deer looking right at the camera, even some of the infrared models. I have had hundreds of photos on the Black Ops, and not a one of the deer looking at the camera. That tells me something right there. They don’t know it’s taking their picture. And when it comes to deer hunting, that’s a big advantage, in my book.”

At least you can hunt on Tuesday

Preachers don’t have 9-to-5 work schedules. Sometimes, it works out that way, but for the most part, you don’t know where you will be at what time, based on the needs of the church and congregation. 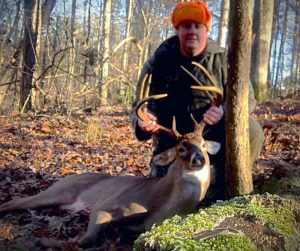 Rubin Weaver of Farmerville, pastor of the Antioch Baptist Church in Union Parish, knows where he’ll be on Sunday morning and evening. Church activities take place on Wednesday and sometimes Saturday, too. After that, who knows?

“Things can be going quietly, and you can slip out into the woods, but 15 minutes later get a call that somebody’s in the hospital or had a death in the family,” he said. “You pack up and go back to town. That’s just the way it is. It’s part of the job. We are basically on call 24/7.”

That can be a hindrance, but there can also be some freedom.

“Like my brother always tells me, at least I can hunt on Tuesday,” he said.

Last year he checked his game cameras on a Monday afternoon and saw a big 8-point he had been showing up in after-dark photos. It was the first photo he had of the big buck in daylight hours in three years.

“He had been strictly nocturnal since I first saw him,” Weaver says. “Then, as a 5-year-old, he all of a sudden shows up two mornings in a row between 7 and 8 a.m. in the same place. I moved my schedule around to be there the next morning — a Tuesday morning — and at 8 a.m., he stepped out, and I got him.”