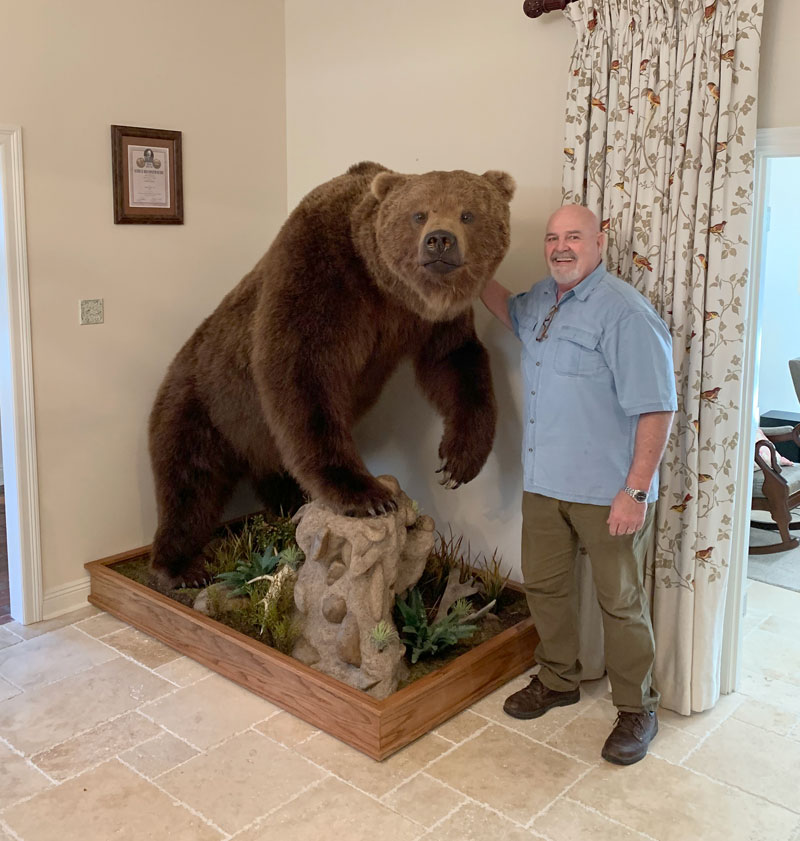 Since 1947, the triennial Big Game Awards program recognizes the biggest heads, horns, and antlers from North America accepted into Boone and Crockett Club’s records from the previous three years.

While many Louisiana sportsmen venture far from home and take trophies on hunting and fishing trips, it is a rare accomplishment to achieve this prestigious award.

“The Big Game Awards celebrations only happen every three years and we are honored to host the sportsmen and women who have found such success in the field,” commented Boone and Crockett Club president James F. Arnold. “Our congratulations to William for their magnificent Alaska brown bear and even more so for their commitment to Fair Chase ethics and wildlife conservation.”

The Boone and Crockett Club began recording measurements of mature male specimens of big game species, taken in fair chase pursuit, in the early 1900s as a way to evaluate the health of the species. At the time, wildlife was in decline and the National Collection of Heads and Horns was established by Club members in 1906 and a museum was opened and dedicated “In memory of the vanishing big game of the world” and to ensure conservation of these species.

According to Arnold, The Big Game Awards is a celebration of hunters’ success, but it is really a celebration of the conservation accomplishments to have huntable populations of wildlife that continue to produce record book quality animals.

Editor’s Note: This is a summary of William Jenkins’ trophy bear hunt. 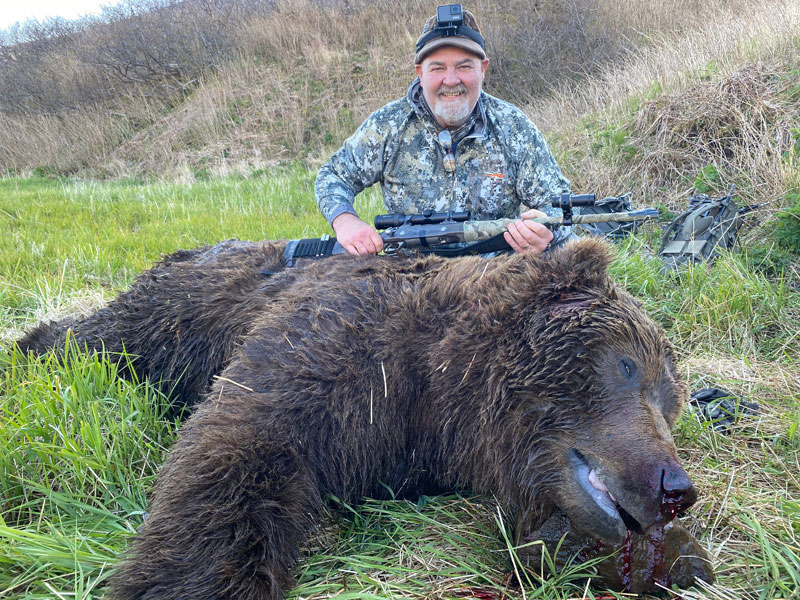 This journey has taken seven years and four trips to Alaska to complete. I have walked many miles up and down mountains and along game trails while crossing several rivers and streams. I shivered many cold nights in small tents and small wooden structures just to achieve the task of harvesting a record brown bear.

My three previous hunts were not successful. Even though I had seen 8-foot bears within 20 and 30 yards, I chose not to harvest those animals. My goal was to take home a trophy size bear.

I landed in Cold Bay, Alaska, May 8, 2021. Greg King, my guide, was already at camp making sure everything was ready. This was the third hunt Greg has been my guide on and from past experience, I knew it would be top notch.

We had a slow start. Monday, May 10, the signs were good sitting and glassing. I saw one small bear across the valley halfway up the mountain. The next two days were uneventful and Thursday the weather turned bad so we spent the day in camp. Friday and Saturday, we saw bears, but not the right one.

Sunday was a beautiful day. We left camp, walked about an hour and spotted a large bear at about 2,000 yards and headed up the valley.

“That’s the bear,” Greg said. “I don’t even have to take out the spotting scope. He is a huge bear. Lets go.”

The boar was watching a sow, but lost interest. She walked over the ridge out of sight. The boar was at about 1,000 yards as he walked into some alder bushes and disappeared. Greg said, “He’s laid down and we are not leaving till he stands up!”

For the next seven hours we waited. We walked around, had lunch and snacks and glassed the mountain. Around 5:30 p.m. the brute stood up. He walked down to the valley’s edge and started browsing and wallowing in the grass. As Greg and I steadily drew closer, I stepped on some floating tundra and went waist deep with one leg. Luckily the other leg stayed on firm ground. The one leg never touched bottom. Greg reminded me to watch my step and check the ground with my walking stick to make sure I have solid footing. We worked our way to within 139 yards. The wind was perfect right in our face.

The boar was quartered away, so I was able to sit on a small dirt mound and raise my knee on the mound to use as a gun rest. My heart was beating very fast! I know this, because when I tired to view my Go Pro after the hunt, I saw a view of the sky; but heard myself breathing like I had just run a five-minute mile!

I squeezed off the first round and heard the click of a bad round. I quickly loaded a second round, aimed and fired. The bear rose, looked, and I hit him with the second round. As he was trying to get up the embankment, I got off a third shot and he rolled backwards onto the ground. We kept an eye on him, but there was no more movement.

What a rush! I called my wife! She was relieved and excited! After we took pictures, Greg started skinning. Greg said he had packed out many hides over his career but both of us together were not going to be able to pack this hide four miles. We separated the hide from the carcass and walked back to camp to come back in the morning with an inflatable raft and float the hide back to camp. We arrived at midnight.

On Monday, outfitter Richard Guthie dropped off a small inflatable raft and we walked the four miles back to the hide. The hide had to be rolled up on a tarp and pulled about 300 yards to get to a creek, which feeds into the river. It was so heavy we had to stop every 10 yards or so to catch our breath. We reached the creek, loaded the hide and all our gear into the raft. Many times the raft would bottom out and get stuck on the river bottom. We would struggle with the raft to get it floating again. As we got closer to the end of our 11-hour task, Greg told me to go ahead and get to the camp.

He said soon he would not have any control over it in the increasing current. Greg told me where to wade out in the river and be ready to catch the raft. If I missed it, it would float into the ocean and we would lose the hide. I felt like a goalie on the soccer team. As the raft approached me it was moving back and forth as the current was getting faster! There was no way I was going to let that raft get by me. I’ve spent too much time hunting for a trophy Brown Bear. I finally got him. No way was I going to lose him now. I caught the raft and was able to pull it to the bank.

Tuesday we moved the hide into our wooden camp structure and I watched Greg, who is also a master Taxidermist, go to work. Greg periodically sent me pictures. One was a face shot of the bear. I showed this picture to my 5-year-old granddaughter and told her I needed a name for my bear.

She looked at the picture then looked me straight in the face and said “Max!”

Chris Bush is one of the best speckled trout anglers on the planet. He offered to take Marsh Man Masson fishing in Texas. […]