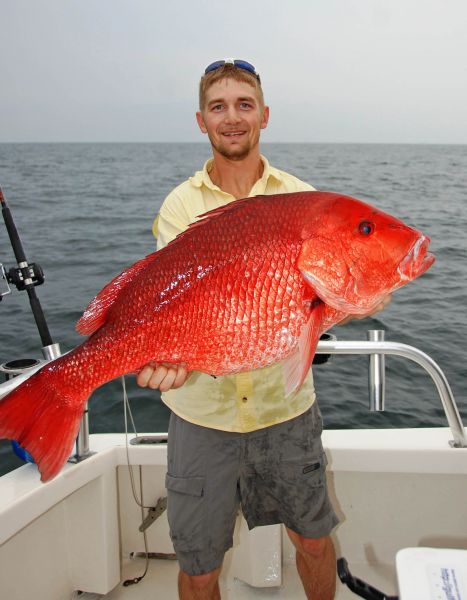 More power for the hook set

Many fishermen hold their rod tips parallel to the water or slightly higher when they’re fishing for snapper. But Orange Beach’s Art Jones said that pointing the rod tip at the water allows you to bring the rod straight up over your head when you feel a bite.

He believes this gives anglers have twice the hook-setting power, especially when fishing in deep water.

Get the lead out

To catch a really-big snapper, you’ve got to get the bait away from the lead, Jones said.

As the lead falls to the bottom, it will fall away from the bait.

“Once the lead hits the bottom, the bait often will be from 4 to 12 feet up in the water away from the lead,” Jones explained. “Then the bigger snapper won’t be spooked by the lead, and will come in and take the bait.”

Because many fishermen get tired of reeling their lines up and down every time they get bites, they might not check their baits often.

Jones said that’s a mistake, since that means they might be leaving their hooks in the water with no baits on them. He said that when the fish stop biting, your bait is probably gone.

Instead, reel up as quickly as possible and re-bait after missing a fish.

But, Jones said, time is of the essence because the more time that elapses between when a fish steals your bait and when re-bait and lower your line back down, the fewer fish you’ll catch.

Also, snapper seem to prefer bigger, tougher cut baits rather than softer, smaller offerings, Jones said. And the oil from the cut baits gives off a scent that attracts fish.

“If snapper are feeding aggressively, you might catch all you want with half a cigar minnow,” he said. “I cut the cigar minnow in half to allow the oil from the minnow to give off a scent that attracts the snapper.

“But if the snapper are stealing your baits, you’re probably fishing for really big snapper. Then you need to use a mackerel fillet, which is tough.”

Jones said to hook the fillet three or four times to thread it onto the hook.

Capt. Art Jones of Orange Beach, Ala., said he double-hooks a big bait like a mackerel fillet that is 6 to 8 inches long and 3 to 4 inches wide.

“I’ve found that bigger baits produce bigger red snapper,” Jones said. “A bigger, tougher bait like mackerel will give you more chances to take a red snapper than a smaller bait will.”

Once an angler gets a snapper on the line, it’s important to know how to get that fish to the boat.

Art Jones said the key is to stop reeling when a snapper makes a run and peels off drag.

“Wait until the fish stops its run, and then begin to pump and wind — just like you will to land a marlin or a king mackerel,” he said. “As long as the fish pulls off line, you’ll know your tackle has done the job of helping you land the fish.

“When the line stops, you’ve got to pump and wind to help the tackle bring the fish to the boat.”

But once the fish gets to the boat, the battle still isn’t over.

Anglers can lose a snapper at the side of the boat for two reasons.

First, he might get the fish’s head out of the water before the first mate is ready to net or gaff the fish. When the snapper’s head is out of the water, and the boat is rocking back and forth with the waves, the weight on the line actually can help pull the hook out of the fish’s mouth.

So it’s best to keep a snapper under the water until you’re ready to land it.

Use the right line

Avid red snapper guide Art Jones said the line you use has a direct relationship to the size and number of snapper you take.

For instance, he doesn’t like braided lines that have no stretch. Jones said the stretch in monofilament acts like a shock absorber: Before the drag begins to slip, the monofilament will stretch like a rubber band, which helps keep the line tight and the hook set firmly in the snapper’s mouth.

This stretching also prevents the line from breaking. Jones thinks no-stretch lines allow the snapper to jerk against the line. Because the line doesn’t stretch, a snapper will tear a bigger hole in its lips, and the hook will fall out.

So if you’re fishing for a really big snapper, don’t use no-stretch lines like braid. Instead, stick with old-fashioned monofilament.

Drift-line for more and bigger snapper

If you learn to fish the drift-line technique of presenting a bait slowly and gently to red snapper, you can catch more of them on every trip, Orange Beach’s Jack Wilhite said.

But when drift-lining cigar minnows off the stern of the boat, the current can cause baits not to get down to the depth where the snapper are feeding.

So, Wilhite adds a small slip sinker to the line to get the bait down and uses spinning tackle to cast the bait in front of the boat. 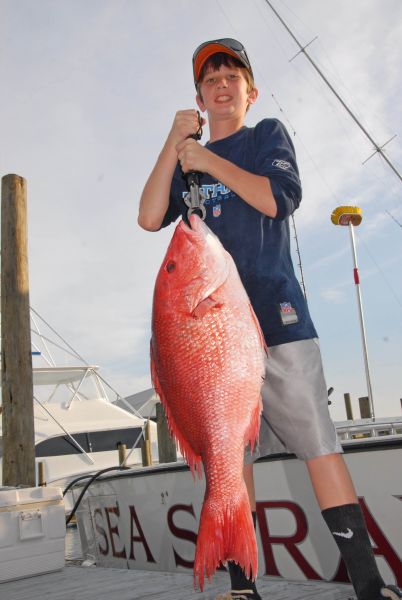 Jones say that, if the current is moving at 1 knot, you’ll have to add a 1/2-ounce sinker. With no current, you won’t have to add any weight to the line. But generally he uses a 1/4-ounce, egg-shaped slip sinker ahead of the bait and 30-pound-test monofilament line that matches the color of water.

Remember, Wilhite said, fish can see clear line in clear water, and you might get more strikes using green-colored line. Or, if the water has a little stain to it, use a gray-colored line.

When the bait hits the water

To drift-line, cast upcurrent of the boat, making about a 40-foot cast. Then, when the bait enters the water, the current will pick it up and wash it back toward the boat.

As the bait enters the water, the lead begins to fall away from the hook and the bait. Because the lead is heavier than the cigar minnow, it will slide down the line and away from the bait.

By the time the bait floats 30 to 40 feet from the bottom, the lead might have fallen 5 to 10 feet below the bait.

When the line begins to come back to the boat, free-line more monofilament by simply pulling the line out and allowing the current to catch the line. Then the lead can continue to fall even after your line has passed the boat.

When a snapper spots the cigar minnow moving down toward the bottom, it sees a free-floating bait that presents an easy meal.

And then it’s fish on.