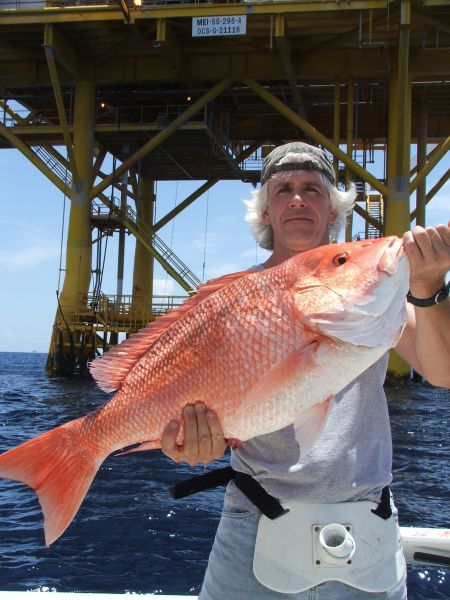 Terry Jacobs is what you might call old school. He eschews the myriad scientific thinking with regards to American red snapper, his favorite fish.

It’s not just the soul-crushing regulations foisted upon red snapper anglers, which sends the mostly quiet man into sharp bursts of emotional talk: It’s the utter lack of sophistication in which he pursues his quarry.

The console of his 23-foot Pro Line is clear of electronics — just an old compass directing him as it has for years and years.

The GPS and bottom finder are just two more things to buy and break in his opinion. And as anyone who’s spent time offshore in their own boat know, things break all the time.

“It’s just not something I ever got into,” Jacobs said. “A few friends of mine got them, and they were always fiddling with them or sending them off to the factory.

“Pretty soon, I got over the curiosity of what it looks like down there.”

Years of experience and a razor-sharp memory — aided by a detailed log book — tell him where to fish out of Fourchon and Grand Isle. His spots are all oil rigs, and when they’re taken down — a subject he clearly is weary of and of which he simply shrugs his shoulders — he’s found new ones on old block charts and giant maps.

“The snapper (regulations) are something we can make a difference with, and I think you’re seeing that,” he said. “I just know that once the oil spill took place, the government was going to really step up their efforts on removing the ones that are just taking up space.

“There may be some way to convert them into reefs. And God bless the people who take up that fight. But they’d better hurry up, because the feds aren’t messing around anymore.”

Jacobs said years of experience and a fair amount of picking the brains of charter captains has taught him how to judge where the fish will be at a certain rig with techniques almost mirroring Capt. Pellegrin’s.

No bottom finder means referring to his notes and a good game plan to determine where to fish.

How deep to fish

“I know how deep a rig is by the (lease) numbers on the platform,” he said. “Those are marked on the charts. And if the charts are out of date, I’ll look at the block chart and do the math.”

Generally starting about 40 percent down — he and his crew count off line by “pulls” — he goes down to about 60 percent down, carefully judging how the current is bowing the line.

At 40 percent, he gives the fish half a minute to examine the buffet table of his and his companions’ offerings of pogies and speckled trout bellies.

After they’ve hit the 60-percent mark, they forgo the rest of the water column and release all the way to the bottom.

“I used to use double rigs way back when, but honestly I like the work of pulling on a fish several times,” Jacobs said. “You get in a good school and hang two fish, several things can happen. It could be two keepers, and then you’re pretty much done for the day; you could have a keeper and a fish you don’t want to keep, whether it’s undersized by the book or too small for you.

“Then you’ve got a situation more often than not if that fish came up from any kind of deep water: The hook might be in a bad place, the stomach may be sticking out of its mouth, you’ve got to find a place to vent him — and you always want to take care of the little guy first. So then there’s a bigger fish still flopping.”

He said trying to deal with two fish on a double rig is just not worth the potential pain.

“And anyone will tell you: You don’t want any part of even a 5-pound snapper flopping around your hand, legs, whatever,” said Jacobs, referring to the myriad of sharp objects — gill plates, teeth, dorsal fins, even the scales. “It’s just bad news all around. So we stick with one hook below a weight. And every once in a while a king will come through and pop the weight off and you’ll lose everything. Part of the game.”

Jacobs goes snapper fishing when he can go; sometimes that means he goes when it’s really rough.

One gets the feeling he kind of likes the challenge of a sloppy sea and a stronger sense of which of his bank of crew members can be counted on when things aren’t so great.

But the “A team” can’t always be assembled, and often inexperienced anglers are best left to simply dropping the bait all the way to the bottom where there’s generally another pod of fish.

“Especially when it’s rough and you’re kind of just hanging on out there, I’ll tell people just let it go,” he said. “When it hits (the bottom), pick out the little overrun — cause they always seem to backlash a little — and crank it up 3 feet. I give it about 20 seconds on the bottom. The fish are smaller, its a little tougher feeling the bottom that deep and that time getting the line straightened out is often just enough time to lose a bait.

“It takes a few drops to get them used to it, but we bring plenty of bait and there’s not a whole lot of fish to catch anyway.”

The best for cooking

Jacobs said he likes the varying size of fish he catches at the bottom to round out a snapper limit. He prefers a few 8- to 10-pounders to carve up at the cleaning table, but that the 18- to 20-inch fish are simply the best on the broiler or sautee’ pan.

“When you have to carve up a big one to fit your cooking, that kind takes away a lot of it,” he said. “The meat isn’t much different, if at all.

“I just have a hard time being patient enough to slice a slab from a 12-pound fish correctly. I’d just rather have a uniform fillet from a smaller fish.”

The bottom also allows for the chance for a grouper or a lane snapper, a bonus fish that pays off in multiple ways.

“It’s hard keeping up with all of the grouper regulations,” he said with a chuckle, “but the lanes are a nice addition to the box. They eat real well and don’t get too big, which is what I like in the pan.

“Some of my guys on the boat will go after them hard — smaller bait, smaller hooks — if it means we can catch a few more big American reds.”

The recreational red snapper season will reopen from Oct. 7 through Oct. 14, 2022. Bag limits will increase to 4 fish per person. […]