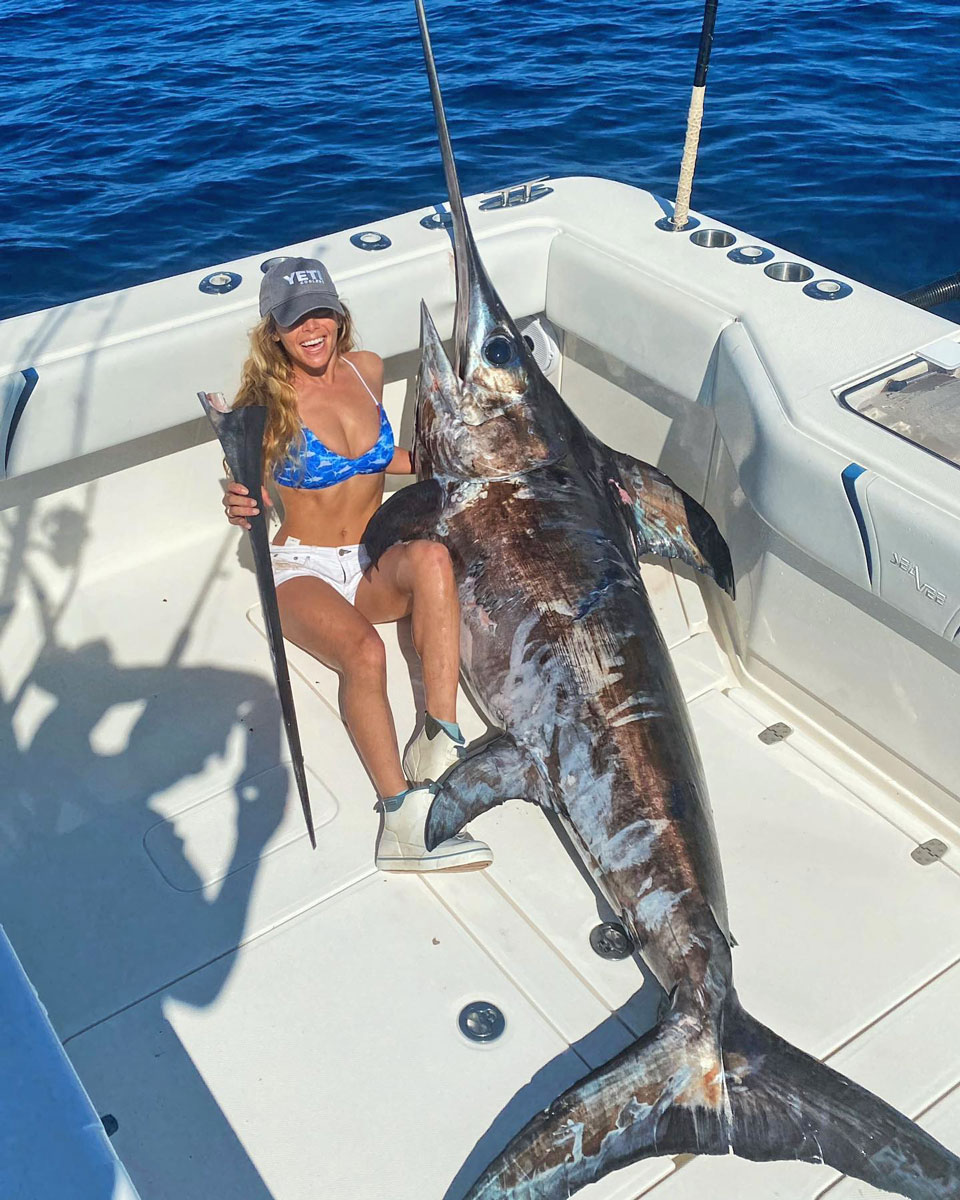 London Rosiere has gone through some pretty rough “seas” in her life. But she’s on a steady course now and her strength shows, both mentally and physically.

It’s never showed more than on a fishing trip in the waters west of Venice when she hand cranked and landed not one, but two whopper swordfish just minutes apart Thursday, Feb. 25. The first was a 130 pounder, which would have made anyone’s day. In fact, Capt. Justin Fayard was ready to wrap up the trip when they got over the traumatic landing of the first fish.

But Rosiere said, “No, we are going to get bit again by another good one.”

She was right. Within minutes, line was screaming off the Shimano Tiagra 80 reel and bending the Poseidon rod double. Two hours later, a 274.8 pounder was on the deck as well. They were fishing out of Venice west of the Canyon and caught the monster fish on fresh squid.

It’s even more amazing when you realize she never once turned the rod over to someone else and the 5-foot-2, 107-pound young lady and Capt. Fayard got the two fish onboard all by themselves. Both of the fish put up epic struggles, but Rosiere is about to run in her 20th marathon and she wasn’t about to “hit a wall” getting her very first two swordfish in the boat. And Fayard was all in when it came to getting the fish aboard his 39-foot SeaVee named TBT (The Blind Tiger).

“When we put out the bait to go after swordfish, I just knew we were going to get bit,” Rosiere said. “After about 20 minutes, the smaller one hit. We got it to the boat pretty quickly and when we hoisted it over the railing, it just went crazy.”

“I didn’t even gaff it,” said Fayard. “I saw it coming up purple and that means they are turbo-charged when they are lit up like that. I didn’t want to have to fight it on a gaff. They come out of that cold water and are hard to handle when they look like that. When he was going wild in the boat, I honestly thought it was going to hurt me before we could get it under control.”

Hauling the big fish in

The second and bigger swordfish offered an even bigger challenge. And it came quickly.

“We didn’t have the bait back down in the water three minutes when that big one hit,” Rosiere said. “I got the fish up in about 45 minutes but when it got to the boat, it turned and went straight down. It took me another hour and a half. It was all I could do, but I kept the rod. I kept thinking about running marathons and how the pain is temporary. It was just mind over matter.”

And she had a lot of “matter” on her hook. When they finally got the big fish back up, they got three gaffs in it and then tried to pull it in through the tuna door on the back of the boat. It wouldn’t fit. Fayard got a rope around the bill and tied it off to a cleat. They pulled and maneuvered and finally got it in.

“We don’t normally catch fish that big with just two people on board and I’ve never tried to get one in the boat with no other help, but we did it,” he said. “I have to tell you, she was pretty impressive fighting those fish. She caught both of them entirely by herself.”

Earlier, we mentioned “rough seas.” Rosiere grew up fishing with her mother and brother. They lived in New Orleans when Katrina hit and Rosiere was on a weekend trip to New York. Their home was destroyed and she had no where to go. She stayed in New York where she eventually started the non-profit Camp SoulGrow. Camp SoulGrow offers no-fee workshops for kids to try everything from fishing to cooking to dancing by partnering with businesses for sponsorship and support. You can find out more about it at CampSoulGrow.org or on Facebook.

More tragedy struck for Rosiere. She lost her mom and her brother and decided to move back to New Orleans and brought Camp SoulGrow with her. After going on a fishing trip with a sponsor, she had an opportunity to work part-time as a deck hand. She’s done it every since and has now also passed her Captain’s School Course for a Captain’s License. She dedicates her fishing, now and in the future, to her mom and brother’s memory. And she uses it to stay positive.

“I think one of my best traits is my positivity,” she said. “And positivity helps you catch fish.”

No one will argue with that in her case.

More than 300 hunters have signed up to take part in the Swamp Safari Shootout, aka the Nutria Rodeo, at Venice Marina on Feb. 24-25. […]