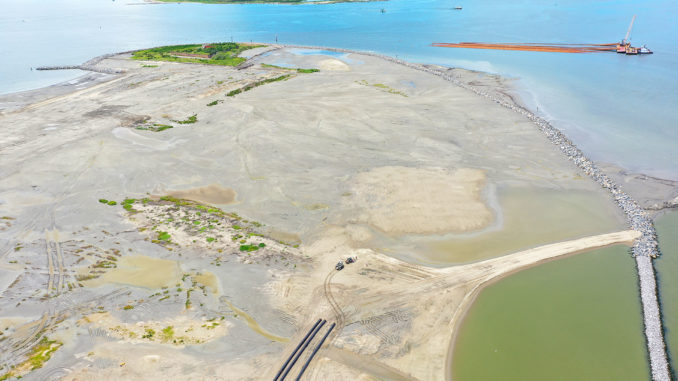 The Louisiana Coastal Protection and Restoration Authority has been working for more than 15 years to rebuild the natural speed bumps that separate the waves and storm surges of the Gulf of Mexico from the inner Barataria Basin.

In late July, the final piece of that restoration puzzle was placed with the completion of a more than $100 million project to restore and protect Grand Terre Island using fines and settlements from the Deepwater Horizon oil disaster.

Located less than two miles east of Grand Isle, Grand Terre’s reconstructive surgery began in the spring of 2021 when a dredge located approximately five miles southeast of the island began pumping sand to rebuild approximately four miles of beaches and dunes and nearly 150 acres of marsh on the north side of the island. Bulldozers and backhoes shaped the sand and mud while rock breakwaters were reinforced along Barataria Pass and installed along the north side of the island to protect restored marshes from wave action.

Construction was slated to wrap up by the end of 2021, however Hurricane Ida slammed into Grand Terre, Grand Isle and the rest of Southeast Louisiana with unprecedented ferocity last August before the restoration effort was complete.

Fortunately, CPRA was able to allocate some additional funds to the project to offset the damage caused by Ida and restoration resumed in late 2021, said CPRA Executive Director Bren Haase.

“The restoration projects in the area that were finished before Ida hit fared very well during the storm, but the ones like Grand Terre that were still under construction did suffer some significant damage,” Haase said. “Much of the sand and sediment that was pumped to rebuild beaches and dunes wound up being captured by the marsh and the rock containments behind the island and some of it stayed fairly close to the backside of the island.”

Haase said restoration of barrier islands and headland beaches in the Barataria Basin began in earnest in 2006 with the Bay Joe Wise/Pass Chaland beach and back barrier marsh restoration and ramped up significantly during and after the 2010 Deepwater Horizon disaster. Every beach between Scofield Island near Venice to Belle Pass at the mouth of Bayou Lafourche and thousands of acres of back barrier marshes have been restored in the Barataria Basin, re-establishing the 45-mile wide boundary between the more sensitive marshes and ridges to the north and the Gulf to the south.

“Maintaining that barrier between open Gulf and the estuary is critical to fisheries production and protecting infrastructure in the Barataria Basin,” Haase said. “It’s also important to maintain the integrity of the passes between the islands like Barataria Pass and Coup Abel Pass not only to allow for tidal exchange and boat passage, but those areas are important spawning areas for fish and provide opportunity for fishing.”

Haase said work will continue and hopefully ramp up significantly in coming years to rebuild marshes north of the Barataria Basin’s restored barrier islands. Without additional marsh creation from dredging projects, sediment pipelines from the Mississippi River and the additional sediment supplied by the Mid-Barataria Sediment Diversion, barrier island restoration projects and the integrity of passes are in jeopardy. Hurricane Ida made that effort more urgent and more difficult by washing away more than 100 square miles of marshes in the upper Barataria Basin last year.

“Reducing the volume of water behind the barrier islands is top priority, otherwise the islands can’t hold up to the amount of water that is trying to pass through the passes to fill in all the open water areas in the basin,” he said. “Sediment delivery projects and large-scale marsh and ridge restoration efforts, like the 500-acre marsh creation at Grand Liard and the more than 1,600 acres of marsh recently built at Spanish Pass near Venice and the sediment we will get from the Mid-Barataria diversion, are especially important if we want those barrier islands to last and we want the basin to be productive in the future.”

A lot of fish

Capt. Frank Dreher guides speckled trout and redfish charters out of Grand Isle and often seeks shelter behind Grand Terre when spring and summer winds make it tough to fish beaches or other open-water areas.

“We catch a lot of fish at Grand Terre, both along the beach when the wind and waves allow as well as along the rocks behind the island,” Dreher said. “You can see the difference in the productivity of the areas where we have healthy marsh like the restored marsh at Grand Terre and East Grand Terre. There are shrimp, mullet, croakers, crabs, all kinds of food behind those islands.”

Dreher said he focuses much of his fishing efforts on areas near Grand Isle that have been restored in the last 10 years, including Queen Bess Island, Fifi Island, Grand Terre and East Grand Terre and the Caminada Headlands, more commonly known as Elmer’s Island and the Fourchon Beach.

In each case, restoration efforts have changed the way the fish use the habitat and how he and other fishermen approach the areas. However, once new beaches and marshes have a chance to settle and waves and tides begin to carve contours along the bottom, fishing generally improves.

“There is a lot of shallow water around Grand Terre since the restoration project and some areas where we could get right up behind the island or right next to the beach are too shallow to get to now,” Dreher said. “I was glad to see them doing the work to Grand Terre even though I knew it would change the fishing for a while. We still caught fish there this spring and summer. If not for that island and Queen Bess, we’re looking at more than 10 miles of open water to the north before we hit marsh. Grand Terre gives us a place to fish.”