Louisiana beaches fill with speckled trout this month, providing plenty of action for those willing to wade into the fray. And these accomplished surf anglers share their expertise.

Heavy stringers of fat specks await along the beaches from the Cajun Riviera’s Holly Beach on the state’s southwestern coast to Grand Isle’s pristine sands, and eastward to the Chandeleur and Breton islands.

I know what you’re thinking: What about all the sharks.

Well, I ain’t gonna lie to you — there’s no shortage of those toothy critters looking to gobble anything they can catch in the surf.

Sammy Romano, who managers Chag’s Sporting Goods in Metairie, spends much of his free time in the Grand Isle surf and finds this freckled quarry predictably fired up and ready to pull drag.

“Maybe it’s the fact that they have to fight the current, but everything about them is keyed up. They’re like trout on steroids.”

Romano maximizes his wading time by focusing on breaks in sandbars, run-outs or any variance of bottom contour. Such features break and redirect current, so you can bet those trout will utilize these spots to lay outside the full current and pick off passing meals.

Capt. Theophile Bourgeois, who runs seaplane trips from Lafitte to the Chandeleurs as part of his Bourgeois Fishing Charters operation, likes the grass beds that have recently flourished around the islands. Trout hide amid the blades of vegetation and dart out with glaring-eyed ferocity to ambush prey.

“It’s pretty cool watching those trout come out of that grass,” Bourgeois said. “They’ll flare that big, yellow mouth and eat your bait.”

Troughs are another trout-friendly feature, so Bourgeois looks for changes in bottom contour.

And seams between lighter and darker water mark the drop-offs, which trout use to ambush prey.

Mullet milling around, splashing and leaping also steer Bourgeois toward trout action, as the predators often run with the herds for two reasons: 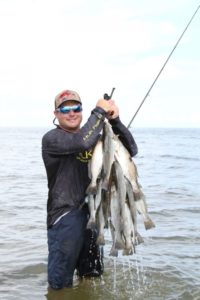 1) Mullet are vegetarians, so they have no interest in the baitfish and crustaceans they displace. Trout gladly eat these freebies.

However, Bourgeois never throws into a mullet school. Instead, he just rakes the edges.

Bonking a mullet on the head or goosing one with a close shot typically spooks the school — and any trout traveling with them.

“If the mullet are swimming, never cast to the lead mullet: Those are the healthy ones, the fastest ones,” the veteran guide said. “Cast two-thirds of the way back. Those are the weaker ones, maybe wounded mullet that are easier meals for big trout.”

Here are some tips on how to make the most of your time in the surf this month.

Tide and timing for best surf-fishing

Determining the best time to target trout in the surf combines the two biggest influences: water movement and temperatures.

Starting with the latter, Bourgeois said the early bird can forget about the worm — this is trout time.

“This time of year, at 7 a.m. there’s a 110-degree heat index, so you better hit them early,” he said. “Once that water gets hot, the trout disappear.

Bourgeois and Romano agreed that incoming tides are generally the best because as they bring cleaner, cooler and bait-laden water closer to shore.

Falling tides in the cooler evening hours can deliver a decent bite, but unlike the filtering marsh, falling coastal waters are typically dirtier.

Romano noted that he typically finds his best action in the last hour of an incoming tide and the first hour of the outgoing.

The reason? Big trout are smart.

“They want to conserve energy, and they don’t have to work so hard during these periods of lighter flow,” Romano said. “I think all the little trout will run around and feed during the stronger periods, but the big ones will sit back and wait for the right period of the tide.

“You can tell that the tide is about to flip because all of a sudden you start catching bigger trout.”

Here’s a tip from Bourgeois: When the tide’s moving a good clip, look for eddies caused by some type of current break and clearly identified by foam or debris swirls.

The weaker, more vulnerable baitfish often end up in those spots, so trout are keen to hunt these high-value areas.

Know when to walk

Stressing stealth, Bourgeois scolds anglers who tromping through the water and spook trout.

The old spike-tail flounder (aka stingray) remains a summer concern, but it doesn’t take much to shoo them elsewhere.

But it’s important to know when not to move around.

“Here’s the biggest thing: If you’re walking and you catch one fish — or even if you miss one fish — stop walking,” Bourgeois said. “Cast every 8 feet for 180 degrees so you don’t walk up on a school of trout.

“If you keep walking, you’ll blow them out of there.”

How to land a fish

Sure-handed anglers can grab trout by the gill covers or grip them over the head, but it only takes one slip for a hook to pop free and stick somewhere painful.

So a short-handle, floating landing net tethered to your waist is invaluable for safe, efficient capture.

If you’re keeping trout for dinner, use a long stringer with a float on the far end.

Bourgeois likes a metal hook on the lead end, which he can easily run through the corner of a trout’s jaw with a simple turn of his wrist. And if the fish flops out of his hand before securely on the stringer the hooked end is less likely to slip out than a straight tip.

In the rare event that a shark does attack your stringer, Bourgeois said you’ll appreciate a cable stringer, which will resist the sharp teeth far better than a simple rope or elastic cord.

And Bourgeois said there’s nothing like a jack-up trout smashing a topwater, so he’ll work a bone-colored Bomber Saltwater Grade Badonk-A-Donk HP from daybreak until about 8:30 a.m.

When the topwater bite dwindles or on days when the fish don’t want to feed at the surface, Bourgeois turns to a 2-inch Badonk-A-Donk slow-sinking twitch bait.

He’ll allow the bait to sink to the bottom or to the top edge of the grass before working  it up through the water column with short twitches meant to imitate a wounded baitfish.

Bourgeois also will use a ¼-ounce jig with a minnow body over clean bottom.

And, of course, the most user-friendly inshore rig will always be the popping cork with a light jig and a minnow body. The rig offers greater casting distances for novice anglers and attracts the attention of trout in a choppy surf.

Plus, the instant strike indicator helps maximize your opportunities.

Romano prefers a 6-foot-8-inch to 6-foot-10-inch medium-heavy spinning rod, as it facilitates fish handling. Essentially, he can swing a hooked fish into the net faster and more easily handle the dehooking than he can with a long rod.

Bourgeois keeps it middle-of-the-road with a 7-foot rod and 30-pound braided line, but he stresses the need for a 30-inch leader of 20-pound fluorocarbon to prevents spooking trout when working clear water — particularly over those filtering grass beds.

Consolidation is key for surf anglers, so carry only a few spare baits and a spool of leader in a lightweight chest pack or back pack.

Bourgeois likes an Everlast wading belt, which combines back support with rod holders and clips for landing net, stringer and tools like pliers and dehookers.

For greater gear capacity (for things like a towel, spare shirt, light rain jacket, etc.) Bourgeois has customized a backpack by cutting slits in both sides, slipping the brace side of single PVC rod holders into the fabric and securing it with zip ties.

In a pinch, stick a spare rod in your waistband.

Frequently-used items such as line snippers and needle nose pliers are best kept on neck lanyards for quick access without the risk of dropping.

This prevents scrapes from any floating debris, and painful stings from the jellyfish and Portuguese man-of-war common to the warm season.

“Also, the sand gnats are terrible this time of year,” Bourgeois said. “They always seem to get you on the back of your leg, behind your knee.”

Sunscreen, lip balm and plenty of water (perhaps in a cooler on the beach or anchored nearby) complete the heat-protection steps.