Summer is in full swing, and many anglers are juggling family, travel and work, while still looking for the time to fish. Summer is both a time of freedom and confinement to traffic jams, long lines at anything touristy and launching ramp chaos. We say that our lives are fast in summer, but this is nothing compared to how fast a speckled trout lives, literally speaking. Physiologically, it lives faster in summer than in winter.

What is metabolic rate and why should anglers care?

For creatures like humans and fish, the chemical reactions in cells related to energy extraction and energy use are reactions involving oxygen. So the amount of oxygen a fish uses is a measurement of a fish’s metabolic rate. Oxygen use is measurable; it provides us a handle to open a window on fish behavior.

Measuring the amount of oxygen used by fish can’t be done from your boat, but don’t worry, biologists have performed many studies on oxygen consumption by fish in controlled environments, which we can use for our purposes. Biologists do these tests by putting fish in a tank and measuring the change in dissolved oxygen in the tank as it is used up by the fish. Remember the last time you killed your bait because you didn’t know the aerator died or the circulation pump stopped? Same experiment, except you weren’t measuring the oxygen in the water.

The effect of water temperature on metabolic rate

While biologists have studied the metabolic rate of fish under many environmental conditions, the one of most interest to me as an inshore angler on the Gulf Coast is water temperature. 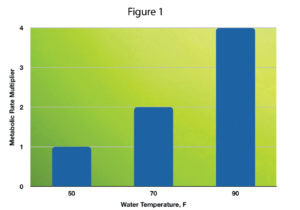 You may have already verified this principle in your bait bucket, because you know that in summer, if you put a frozen water bottle in the with your shrimp, they won’t die as quickly. Lowering the water temperature slows their metabolic rate, which slows their breathing and need for food, while reducing the stress induced by a high metabolic rate.

On Louisiana’s Gulf Coast, the water temperature ranges from a low around 50° F to a high of 90°. Figure 1, which was created with data from a 2014 research paper, Water Temperature, Fundamentals of Environmental Measurements, shows the relationship between metabolic rate in aquatic organisms and water temperature. 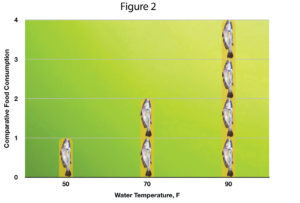 As you can see, the metabolic rate at 90° F is four times the rate at 50°. As we know, the metabolic rate sets the amount of food that fish must eat in a given time period, so redrawing the data as food consumption vs. water temperature in Figure 2 is meaningful to anglers.

If the water temperature drops too much, the lowered metabolic rate will result in immobilization of trout and eventual death. Timothy O’Donnell reports in the paper, Effects of Cold Winters on the Genetic Diversity of an Estuarine Fish, Spotted Seatrout, that Florida speckled trout have died when subjected to a water temperature less than 45o F for more than 24 hours.

So, when a strong winter cold front makes the water temperature plummet, it may seem to us like the trout have left the area, but in actuality, they are still there, just chilling. Most trout are caught due to hunger-driven feeding, so with the cold water suddenly reducing their digestion, there is little need for them to strike at a bait.

My fishing buddy and I have been inspecting stomachs of trout for the past couple of years, and most are empty when we catch them. If there is food, then it’s relatively fresh. That’s why I think trout will not start feeding until their stomachs are empty and conditions for feeding are reasonably good. If this is true, it’s likely that in very cold weather, trout may only feed once a week, and then only in the best conditions. That theory fits pretty well with the inconsistent catching pattern I have experienced when the water temperature drops to the low 50s.

So now we get to the matter at hand: what will be the feeding behavior of speckled trout in the heat of summer?

Summer is a dynamic period for speckled trout, and in many ways, much more dangerous than winter. Trout are forced by their spawning function out into water with a higher salinity level, where, despite the high predation risk, they must leave protective cover to feed frequently. When the water temperature reaches 90°, data says that a trout’s metabolic rate is roughly four times its metabolic rate in winter, requiring them to fill their stomachs every day or two.

In addition to feeling hungry quite a lot, the high water temperatures will increase the trout’s physiological function, which I imagine is like having a continuous caffeine buzz or worse. Remaining in water that is too hot will eventually cause a fish to go into shock because of their high physiological function. This state will result in a drop in feeding and lead to death.

If that was not dire enough, hot water holds less oxygen than cold water, and so summer speckled trout may find less available oxygen at a time when their respiration function is elevated. Plus, there are a number of other changes that occur in warm water, each of which can be toxic to fish. Like I said, summer is a dynamic and dangerous time in the life cycle of speckled trout, so how do they survive?

What to consider in summertime

Despite surface water temperatures that often reach as high as 90° F, trout are able to survive and even grow. To do so, they must retreat to areas with cooler water where they can calm down and where their physiological function drops.

You have probably noticed that on a sunny, hot, summer day, trout often feed in the early morning in shallow water, but when the sun starts to feel like an open oven door, the shallow-water bite slows. Since trout must eat frequently in summer, they can’t depend on feeding only in the morning, so sustained feeding will also happen at other times, but where the water temperature is cooler.

Cooler water can be found deeper, at night, and in clear areas. Speckled trout are primarily a sight-feeding species, so night-feeding generally happens under lights and around the full moon. Clear water is typically cooler than water with high suspended solids, because solids absorb heat from solar radiation more efficiently than the water molecules themselves.

A common place to find trout in deeper water is around oil and gas rigs. In the sounds and bays, these rigs can be in 7 to 12 feet of water; the trout will hang out on the bottom where the water is coolest. The rigs are good habitat, because in addition to being in deeper, cooler water, there is structure to hold bait and structure to provide protection from large predators.

Because of the frequency at which trout need to eat in summer, they have to stay in areas that are holding a significant amount of bait. Therefore, if you are looking to catch limits of trout, look in areas with evidence of large amounts of bait. Big pods or schools of baitfish can be directly seen swimming or jumping, and indirectly by feeding birds, nervous surface water, and the splashing of feeding predators.

Live bait, specifically shrimp, is the most-popular summer bait in Louisiana and is considered by some anglers as the only way to catch speckled trout in summer. Live shrimp is most-often fished 2 to 3 feet under a popping cork or with a sliding cork in deeper water, such as around rigs.

Shrimp can also be fished on the bottom on a Carolina rig or similar rig, but this method is often plagued by hardhead catfish. Be prepared to buy more live shrimp on summer than winter trips, because in addition to speckled trout, you will be feeding a variety of unwanted characters.

Also, keeping shrimp alive when the thermometer hits 90° can be challenging. If you use an aerated baitwell or bait bucket, one trick to prolonging the life of shrimp is to add a frozen water bottle every hour or two. Do not put ice directly into the bait bucket, because it will lower the salinity.

If your baitwell only circulates water from outside to supply oxygen to the bait, it will struggle to survive on hot, summer days. In this case, consider adding an aerator and a means to cool the water.

Artificial baits also catch fish in summer and have a few attractive differences from live shrimp. For one, they are pleasantly incapable of dying. They are also more selective at attracting gamefish.

I find swimbaits fished under popping corks and topwater stickbaits to be the most-productive, shallow-water artificial baits in summer. Around rigs, 1/4- to 3/8-ounce swimbaits thrown into the pilings can be very effective.

When using this technique, give the swimbait time to hit the bottom before beginning your retrieve. For an added confidence booster, try adding a bait-strip product like Fishbites onto your swimbait hook. The natural chemicals released by this product can increase speckled trout strikes. Even for the diehard live shrimp angler, having a pack of swimbaits and bait strips could save your fishing on a day when the ladyfish are around to lick your bait clean.