Like most of Louisiana waters, Sabine Lake’s 90,000 acres on the Louisiana-Texas border in Cameron Parish have certainly experienced unprecedented spring and summer woes with extensive freshwater runoff and inundation.

It has only been since mid-August, when relief arrived in the form of increased salinity from the jetties to the Garrison Ridge Washout on the Louisiana side. Anglers caught trout in these areas and farther north where Johnson Bayou enters the lake.

In the past three years, despite the lake’s stormwater and freshwater tribulations, Capt. Adam Jaynes of Just Fish Guide Service (409-988-3901) has experienced intermittent windows of catching quality trout on the Louisiana side of the lake.

“In my opinion, fall has been the best time to catch numbers of good trout in Sabine Lake,” said Jaynes, 32. “As the cold fronts move in during October, November and December, shrimp and baitfish will be leaving the marshes on outgoing tides, and we’ll catch schooling trout in the lake and very good trout in the flats.”

Just how good can the fall trout get at Sabine Lake?

“We’ve caught solid numbers of fish in the 3- to 5-pound range in the fall — fish measuring 20 to 28 inches,” Jaynes said. “When we are wade-fishing in the flats, you can add a couple of occasional trout weighing 6 to 8 pounds — with a chance at catching one even larger.”

Sabine National Wildlife Refuge, on the Louisiana side of Sabine Lake, is an extremely healthy marsh system, comprised of 85,387 acres of grasslands and 40,403 acres of open water. Bayous, ponds and marsh canals lace its interior, giving shrimp and baitfish many exit routes into the lake.

Jaynes will focus his fall efforts on the Louisiana side from Johnson’s Bayou north to Coffee Ground Cove.

“Actually, fall is the easiest time to catch trout in the lake,” said Jaynes. “I will glass the lake for gulls working and shrimp popping.”

Birds can be hovering about anywhere but often will be over 5 to 7 feet of water — the first contour off the shallow bank’s 2- to 3-foot depths. This same contour edge will work its way all the way north to Coffee Ground Cove.

“For the schooling trout, we will throw tailbaits (plastics), including Texas Tackle Factory’s Red Killer shrimp imitators and MirrOlure’s Lil John scented twitchbaits,” he said. “I’ll free-line those on 1/8- or 1/4-inch jigheads and work them by either swimming them or popping them — depending on how the trout react.”

Schooling trout under birds can be numerous — especially in the 14- to 18-inch range.

There is always the chance to find packs or pods of larger trout when wading near the drains on good outgoing tides.

“I’ll find the larger fish on the downcurrent side of drains and humps, places where these trout can get their fill of baitfish and fatten up,” he said.

If an angler finds mullet moving in these locations, it’s a sign there may be big trout in the vicinity.

Jaynes’ favorite style of fishing for these larger speckled trout is wading.

“These older fish are more sensitive to sound and any type of sensation that they don’t normally encounter in their habitat,” he said. “When wading, there’s less movement and noise, and you’re not drifting over the trout and disturbing them the way you can in a boat.”

Jaynes will cast topwaters for the larger trout — chiefly Heddon Super Spooks and One Knockers. He will also work suspending twitchbaits like MirrOlures’ XL MirrOdines. His favorite colors, depending on the stain of the waters, are gold/pink, clown, bone and black.

Jaynes has quite a different style when walk-the-dog topwaters compared to other anglers.

“I’ve always worked that rod with the tip up instead of the tip down like other anglers,” he said. “I’ll work topwaters by varying the speed and the length of the sweep of the rod and adjust the slack. If I want it to work wide left and right, I’ll retrieve it slowly and pop the rod a little higher.”

Jaynes will fish walk-the-dog topwaters at a rapid pace in early fall and usually slow down his retrieves a bit as the waters get colder near winter.

He’ll use the same tackle when fishing schooling trout with tailbaits.

Jaynes will always release trout 25 inches and above and encourages clients to obtain a replica unless they desire a skin mount. He is conservatively aware of the greater numbers of eggs these larger trout contribute to the Sabine Lake Estuary.

For anglers new to the area, access to Sabine Lake is via Highway 82, approximately 3 miles west of Johnson’s Bayou. 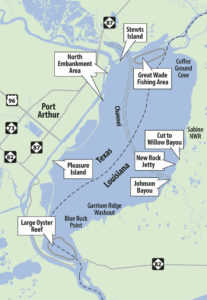 On Sept. 1, anglers fishing in all of Texas coastal waters including the Texas side of Sabine Lake became subject to a 5-trout daily limit with a 15-inch size minimum. No more than one speckled trout exceeding 25 inches is allowed in the daily creel.

Louisiana anglers may follow the current Louisiana limit of 15 trout at 12 inches or better in length with no more than two over 25 inches when fishing the Louisiana side of Sabine Lake and launching and landing in Louisiana.