The plan was to meet at Basson’s Boat Launch in Galliano, where Captain Mike “Rippin Lip” Guidry would be waiting with his brand new bay boat, along with Captain T-Man Cheramie. The three of us were heading out to “run the circle” that these two guides follow to load up with speckled trout and redfish this time of year.

Cheramie, who has been guiding for 30 years, said he’ll run this route throughout the summer, making exceptions only for special trips into other waters at a customer’s request. Guidry, who has been guiding for almost 20 years, said he’ll do the same because he consistently catches fish all along the route. Besides their 50 combined years of experience guiding fishermen, these two often partner up to fish in competitions such as the ISA Tour, ESPN’s Redfish Cup and the LA.WL&F Tournaments, so I was confident we’d catch fish.

What I wasn’t confident in was the weather. I’d already canceled and rescheduled two trips due to monsoon-like rains and high winds. Now, the rains had subsided, but the winds stayed strong, and Bob Breck’s Fox-8 forecast predicted 15- to 20-knot winds and 3- to 5-foot seas for the day. It was either cancel a third time, or do the best we could under the circumstances.

We chose the latter and hoped for the best.

“We’ll run the circle, and fish the protected sides of the lakes, and we’ll catch fish, I’ll guarantee it,” he said.

Guidry fired up the outboard, and the brand-spanking new bay boat got underway. He took us down through the Sulfur Mine and south past Pointe Aux Chenes to Lake Chien. You can cut 20 minutes off the boat ride by launching at the Pointe Aux Chenes Marina, but Basson’s was closer for us by car, so we launched there.

On a decent day, that is, a day with light winds from any direction, you can start wherever you choose. But on very windy days, you choose where to begin depending on the direction of the winds.

“You want to fish the lee side, the calmer side of the lakes. On a strong west wind, we begin our running of the circle from the east side and start in Gray Duck. On a strong east wind, like today, we’ll run it from the west side beginning in Lake Chien,” Guidry said.

The key to finding the fish

On this morning’s stiff east wind, Guidry idled to a stop along the east side of Lake Chien and dropped the trolling motor. The plan was to fish near the shallow shoreline where both speckled trout and redfish like to congregate and chase baits in pockets and coves. In such shallow water, stealth is vital to success.

We started working our baits near a point, and tossed both toward and away from the bank.

“What we fish is not a particular spot, but conditions,” Cheramie said. “The key is to find decent water, moving water, and signs of bait in the water. That’s the T-Man Trinity — find that and you’ll find fish,” he said.

Guidry used a remote control to steer his trolling motor and brought us closer to the shoreline, but still far enough away that I couldn’t reach it with a long cast. From that distance, the water was calm enough to fish, even with the howling winds. Not only was it calm enough to fish, it was calm enough to use topwater baits, which was our plan for the morning. Guidry had on a solid chartreuse color, while Cheramie and I used bone-colored topwaters, his a MirrOlure She Dog and mine a larger Top Dog.

These guys don’t get to use topwater baits on their normal charters because the goal then is to put fish in the boat; a goal best accomplished using live baits or soft plastics under a cork. But on trips with no customers aboard, the goal is strictly to explore and have fun, and nothing in coastal fishing is more thrilling than having a big fish explode on your topwater bait.

We worked that initial area over pretty thoroughly, and managed several “blow ups,” but no real hooksets. The fish were slapping at our bait, and one knocked my topwater about a foot out of the water, but they were not really committing to the bite. We changed tactics and fished under corks for a few minutes and boated a few trout on both live bait and soft plastics. Guidry said live shrimp fished in these areas will virtually guarantee fish in the boat.

Live bait back up plan

“Always bring the live stuff when it’s available. I know it’s expensive, but it still the cheapest part of your fishing trip. Just automatically factor it into your overall expense and consider it a necessity. Then hang one under a popping cork and see if a speck or red or drum or flounder don’t inhale it,” he said.

“Or a catfish,” Cheramie said, laughing as he reeled in a hefty gaff-top.

If you prefer fishing soft plastics, Guidry has a few favorites. He likes the Matrix Vortex baits in either shrimp creole, purple haze or blazin hornet colors, and he strings them on a ¼-ounce jighead and hangs them under a popping cork he makes at home. His “Guidry Popper” is made with flexible wire leader with barrel swivels crimped on both ends, and a typical weight, stopper and beads, and it works as well or better than any you’ll buy at the store.

“I don’t make them to sell, just to use,” he said. “And they work great whether fished with live bait or plastics,” he added.

We boated a half-dozen specks or more with live bait under our corks but decided to move farther down into Lake Chien to continue running the circle, and to look for bigger fish, hopefully fish that would hit our topwater baits.

Lake Chien is large, and its shoreline has many great cuts and coves to explore, and we found fish at every stop. Our tactic never varied: use the trolling motor to sneak in, because bigger fish are easily spooked. Try to drift as much as possible, because it’s quieter than trolling, and fish topwaters. And we finally found fish willing to smack the topwaters, though they weren’t the 3- to 5-pound fish we hoped to bump into.

We got hit consistently by some average-sized trout and by a few that couldn’t even pass the 12-inch test. It amazes me how aggressive and voracious a predator a speckled trout is;  they’ll attempt to devour a fish nearly half their size. And then the gaff-tops started hitting our topwaters. We got two-at-a-time hook-ups, with specks slamming us in between, and while it was a lot of action and a lot of fun, our goal was to find trout, and bigger trout, so we moved again.

“We’re committing a fishing guide sin, by leaving biting fish to go look for fish,” Cheramie said. “If we stay here and fish under a cork, we’ll load the box with trout. We’ll have some junk fish in the mix and some undersize specks to throw back, but there’s a ton of bait in here and a ton of keeper-size trout to catch,” he said, pointing to schools of small baitfish throughout the large cove.

Our next stop was Lake Felicity, where we again found fish, but the water wasn’t nearly as clear. Our original plan was to head out to the Fornation Islands, but under the extremely windy conditions, Cheramie said it’d be a waste of time.

“We’ve been catching some beautiful trout at the islands, but these winds will have the water so rough and so muddy it’ll be unfishable,” Guidry said. “On a calm day you can bounce around the various islands; start at Fornation and move to Northwest Island, Philo Bruce, Casse-Tete, Calumet… you’ll catch some nice trout out there. I even fish out there on south winds because you can find calm water on the north sides.

“But when I head out there or I fish the structure in Raccourci, I also like to take live croakers or live pogies, and I fish them freelined. The big mama trout will inhale them,” he said.

Since none of the islands were on our itinerary that day, we took the short cut through Felicity Pass and made the bumpy ride to the east side of Lake Raccourci to search for the T-Man Trinity; clear water, moving water and baitfish.

But that trinity was hard to find. We’d find decent water with no bait, or bait in very stained water, and the winds were now blowing a steady 20 miles per hour. Guidry moved us several more times, and we took refuge from the winds in the coves on the broken shoreline where there are so many places to fish you couldn’t exhaust them all in a month of Sundays.

Fortunately, the reds were in the coves, and they’ll eat a topwater bait as readily as will a trout. And when a decent-sized redfish smashes your topwater, you’ve got a whole lotta fun on the end of your line.

The initial impact is startling; they hit with such ferocity it can pull a lazily attended rod right out of your hands. Then you let ‘em run and reel in during the time between runs until you wear them down.

Somewhere along the route, I lost my bone-colored topwater due to a faulty knot. We later recovered it, but in the meantime, I had switched to a black body/chartreuse head She Dog that the bull reds seemed to like. They crashed at it and swirled on it and knocked it around, but for some reason they wouldn’t commit to chomping down on it enough to let me hook them. The bone-colored She Dog Cheramie was casting produced, as did the chartreuse topwater Guidry fished. We played some catch-and-release, and we moved again to complete the circle.

“We catch a lot of bull reds in here,” Cheramie said as we headed toward Gray Duck. “Reds 35 to 38 inches long are not uncommon. That puts them in the 15- to 18-pound class and even heavier. That’s a lot of redfish on the end of your line.”

“Gray Duck has some great coves, cuts, bayou’s … all great places to fish, and you just work off of points and cuts, like we’ve been doing,” Guidry said. “If the wind would have been blowing from the west, we’d have fished the same area and run the same route, but we’d have started at Gray Duck and run the opposite way and fished the opposite shoreline. That way we’d still be fishing the calm side so the wind wouldn’t be such a factor.”

If we’d been out to load the boat with trout, we could have. We’d have limited out before we left Lake Chien and never completed the circle. But we’d have to have been fishing live bait under corks. Not that anything is wrong with that; I actually love to fish that way. But we said from the start this was a run-the-circle day and a topwater day, and we still managed a nice box of fish under very windy conditions. So, if the forecast is for stiff winds, there’s no need to stay home and just hope for better weather. Go run the circle. You’ll load the box before you make it all the way around. 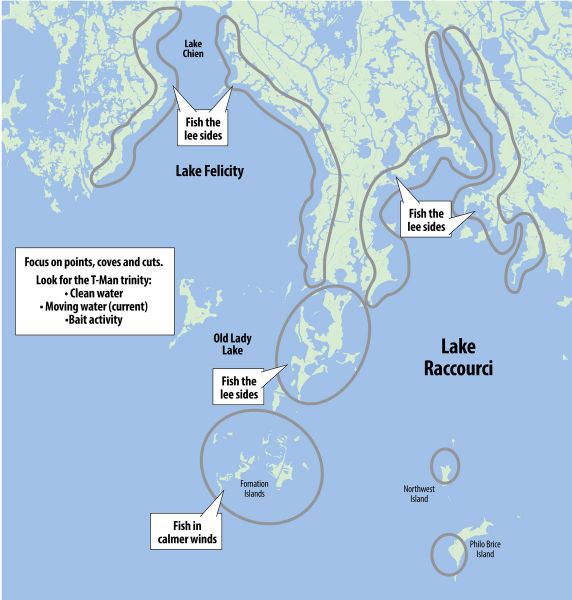 When the grass is thick, it is hard to beat throwing a weedless frog lure or similar weedless baitfish imitation from a kayak for a bass or redfish. […]

About Rusty Tardo 336 Articles
Rusty Tardo grew up in St. Bernard fishing the waters of Delacroix, Hopedale and Shell Beach. He and his wife, Diane, have been married over 40 years and live in Kenner.