As X-cited as founder and owner Chas Champagne was about the recent release of the new Matrix X-Shad, consumers — the anglers who count on the artificial lures to put fish in the boat — are even more amped up.

“The public is anticipating this more than anything we’ve ever come out with. I can kind of judge how busy something is going to be,” Champagne said, noting the high volume of calls and inquiries from store owners is a tell-tale gauge.

However, the veteran angler and artificial lure manufacturer emphasized, it isn’t a new line of soft plastics, per se.

“It is the exact mold of the ever-so popular Matrix Shad. The only difference is, we put a belly slit in this so it’ll give anglers the opportunity to rig it weedless or on an open-faced jighead,” he said.

“They’re hand-painted, each one. Instead of having purple/gold or black/chartreuse — colors in the fishing world the past 40 years — like a double-laminate, we’re going after a natural image, like we peeled the skin off a fish” and put it on each soft plastic, he said.

“It’s about as accurate as you can get when you paint and draw something.”

Redfish, flounder, other saltwater fish and even bass have been fooled by the Matrix X-Shad.

Champagne shipped frozen minnows overseas to the designers, who came up with the ultra-natural paint jobs for pogeys, mullets and glass minnows, right down to the gill plates painted red, the distinguishing dot on the pogeys and the silver line right down the belly of the glass minnows. 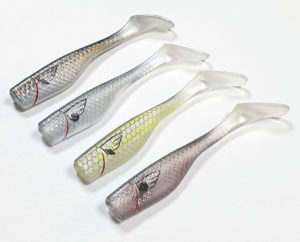 “That one’s really sharp,” he said.

The painstaking details are added to the soft-plastic body, already known for its flexibility and durability. The hand-painted finish was put to the test last April when Champagne and others tested the Matrix X-Shad, along with the Matrix MEGA and the Matrix Rip Shad, in Florida. Why Florida? If an artificial lure can entice speckled trout and other species to bite in the heavily pressured, clear waters of the Florida coast, it can trigger bites anywhere, Champagne has reasoned during his years as an artificial lure manufacturer.

The Matrix X-Shad has been in the works a long time.

“Man, I’ve been dealing with this thing two years to get it right,” he said.

The Matrix X-Shad’s paint job holds up “pretty well,” he said, adding that it should last the lifetime of the bait, which is a shade longer than 3 inches. The body is the same as the Matrix Shad; it’s common to catch at least seven or eight speckled trout on one of those.

“I’d say it will catch five or six fish before you might see scratches and scrapes. I was impressed,” Champagne said.

There is a catch. Each bag of five baits is fairly pricey ($6.99) for the saltwater fishing market — not so much so in the bass-fishing market — but Champagne wants to make anglers aware that it costs approximately five times as much for him to make one Matrix X-Shad as it does to make a Matrix Shad.

“I’m going to get the price down,” Champagne vowed.

This new bait lure is at the upper end of the soft-plastic echelon, he emphasized, noting the Matrix Shads are “well-priced” and have proven effective in inshore waters from Texas to Florida and beyond.

“Both will catch you fish, but one of them is a little bit fancier,” he said. “If one of the anglers wants to have the newest thing, one with bells and whistles, this is it.”

Tie the newest product on and use it to target big speckled trout, which are a little more wily, and/or during trying fishing conditions, he said.

“I wouldn’t use these lures like under birds. I’d save these for when it’s a hard day on the water,” he suggested.

For more information about the Matrix X-Shad and other Matrix products, call 985-707-9049 or visit www.matrixshad.com.