Delacroix-area guide commands anglers to ‘move’ if they want to fill their coolers with specks, plus some bonus reds.

The word “march” is more than the name of a month. It’s also a military command that, in essence, means to MOVE! It is a verb and therefore, an action word, and according to Nick Rando, a Delacroix-area charter captain, it’s what you’re going to have to do to put together a decent box of fish this month.

“March really begins the trout transition, so they’ll be on the move, and anglers will have to do the same to catch them,” Rando said. “By now, winter is dying, but it’s usually got enough life in it to send a few last gasps of colder air our way. This month, the days do get longer, but even with the increasing period of March sunlight, it takes a while for the water temperatures to get back up into the trout’s comfort zone. It means the trout will hover in deeper water on chilly mornings and in colder weather, and then move into shallower water whenever we have milder temperatures, because shallow water warms up faster. But they won’t wander far from their deeper-water retreats, just in case winter shoots us a blast of cold air.”

Through the years, I’ve found that many anglers dread transition months because trout are scattered and often scarce. But Rando welcomes them, saying March really kicks off a great spring run of speckled trout in the Delacroix area, and he considers it a great time to chase them.

“I actually like fishing this month, because March is generally too early in the season to have to worry about a high river inundating our area with muddy, river water,” he said. “We’ll have to deal with that possibility by mid-April or May if upriver rains are heavy, but we sure hope the (U.S. Army Corps of Engineers) won’t have to open the spillway again this year. Last year’s extremely high river and two spillway openings devastated our trout fishing, so we definitely don’t want to see a repeat of that.”

Rando also said you can get a little extra sleep before heading out on the water.

“In March, I actually prefer to fish a little later in the day; preferably late mornings and early afternoons,” he said. “From about mid-February until early April, I find the bite is better when you leave a little later, so March gives you some bonus sleep.

If winter clings to life

“If winter weather resurrects, you’ll have to hunt reds and trout in the deeper bayous, like Bayou Batola, Bayou Robin, Crooked Bayou, False River and Oak River,” Rando said. “The good thing is, winter tactics are simple: get into a sharp turn in the bayou where the water is typically deeper, anchor off and fish the ledges with either soft plastics on a 3/8-ounce jig, or with live shrimp on a drop-shot rig, or with dead shrimp.”

Rando said if he’s fishing plastics on the bottom or tight-lining, he’ll toss Matrix Shads in the lemonhead color in stained water, or the magneto color in clear water.

For fishing live shrimp on the bottom, he much prefers using a drop-shot rig rather than the usual sliding-sinker rig because he can feel both the bottom and the bite much better.

Rando said anglers want to target any of what he calls the “middle-ground” bays.

“By now, with the weather beginning to warm up, those trout will spread over the lakes and bays near those same, deeper bayous, so that’s where you want to hunt this month: “Lake Batola, Pointe Fienne, Bay Jack Nevette, Skippy Lake, Bakers Bay, Lake John, Four Horse Lake, Pato Cabello, Grand Point Bay, Branville Bay, Bay Lafourche or really anywhere with deeper water nearby,” he said.

“I pick a lake or bay to fish, one I know usually holds trout this time of year, and I work it over thoroughly,” Rando said. “I drift or troll off points and along the shoreline, and I look for current lines and bait activity. You just have to pick an area and work it. Position your boat so you can throw towards the bank for reds and towards the middle for specks. Yes, you can actually catch both in the same area this month.

“Give a spot five or six casts to produce some action. If you get none, move 25 or 30 yards down and try again. Don’t run too far or you could pass up the fish. Just keep repeating that process until you’ve worked the bay over thoroughly.”

Rando keeps it simple. Either live shrimp or the 3-inch Vudu shrimp in glow/chartreuse or the natural color, fished about 3 to 4 feet under a 4-Horsemen cork. He said the extra-noisy cork does draw more attention to your bait in bigger bays and the windy conditions common to coastal marsh fishing.

Later in the spring, as the water temperature rises, Rando will shallow up to fish 2½ to 3 feet under a cork.

“Overall, I find I catch more fish by fishing just a little deeper this month, because the fish are staying closer to the bottom, even in the shallower bays,” he said. “Fish shallow enough to keep your bait off the bottom, but deep enough to reach the fish that are hovering just off the bottom.”

Anglers have to watch the wind and weather forecasts and pick the better days. The normal average high temperature in March is 72 degrees, and average lows are in the mid-to-high 50s. Winds tend to be more from the north and northeast early in the month, but they become more easterly by mid-month, and by late March, mostly east and southeast. Wind speeds can vary widely from 0 to 15 mph on average.

Trout begin their annual transition from the deeper bayous of the interior marsh toward outside waters, so they could be almost anywhere from those bayous to nearby lakes and bays. Keep in mind that main bayous and canals that funnel water in and out of the marsh are natural highways they’ll travel, so find a choke point — the mouth of a bayou or anywhere the water narrows down to flow into a bay — and fish there. But remember the Rando rule: five or six casts, if nothing bites, move. Try under a cork and cast-and-retrieve. If you are getting enough bites to keep you in that spot, then stay.

“As long as you are putting fish in the box, even if the action is not fast and furious, it’s better to catch fish slowly and steadily than to leave fish to look for fish,” he said.

Another favorite tactic of Rando’s is to fish any of the bigger bays that have grass beds along the shore.

“Troll right along the edge of the grass bed and cast out away from the grass towards the middle,” he said. “I often find some bigger trout hanging outside those grass beds and they’ll smack those small MirrOdine lures. You might only catch five or six fish there, but they’ll be big.”

And if nothing is happening in the inside bayous and bays, burn some fuel and try the same techniques in the bigger bays nearer the outside waters. After all, it’s March, so you gotta move. 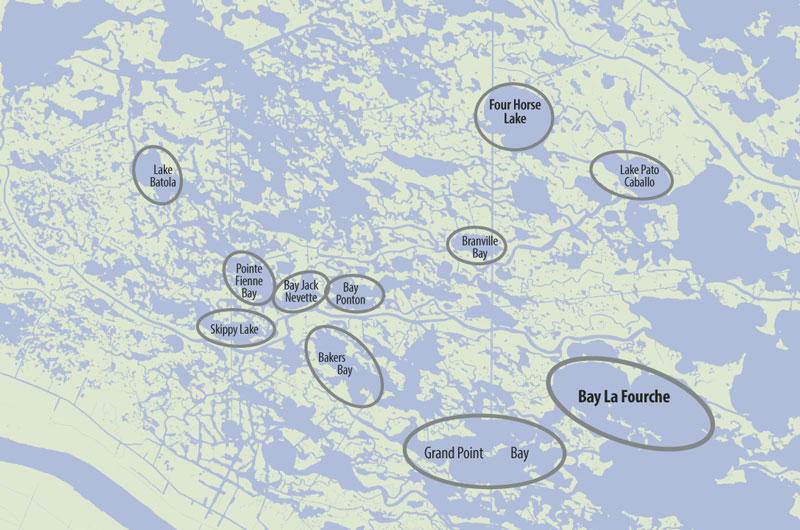 About Rusty Tardo 360 Articles
Rusty Tardo grew up in St. Bernard fishing the waters of Delacroix, Hopedale and Shell Beach. He and his wife, Diane, have been married over 40 years and live in Kenner.