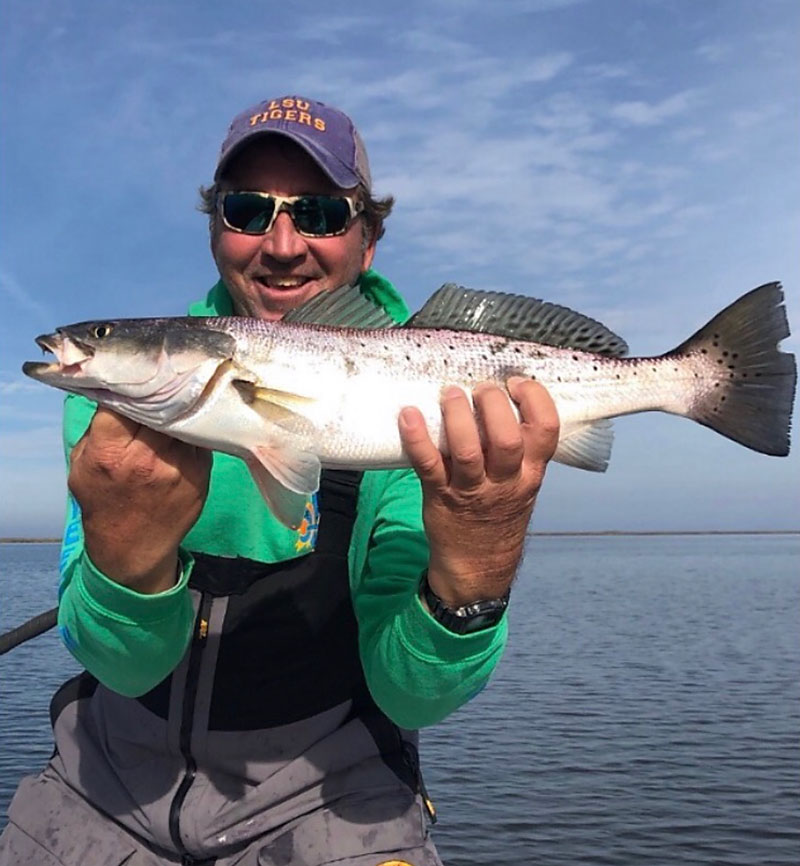 In previous years, Jack Payne at Sweetwater Marina in Delacroix Island would point August customers in the direction of Black Bay. That big bay has numerous islands, large and small, and structures that have produced trout for decades. Many an old salt has great memories of incredible catches at landmark hotspots like Stone Island, Lonesome Island, the Wreck, the Black Tanks, Iron Banks and Battledore Reef. Those spots were loaded with trout every summer and consistently produced hefty fish and plenty of them.

“Unfortunately, it’s just not like that anymore,” said Payne (504-453-8382). “Most of the time, the water is muddy out there from the river, and even when the water is clear, the salinity is low, so most trips outside have ended in disappointment this year.

“On top of that, we’ve had a tough time getting shrimp this year, so our live shrimp supply hasn’t been as consistent as we want it to be, but for some reason, every marina is facing that challenge right now.”

A best-case scenario is a low river, southerly winds and salty water from the Gulf, myriads of shrimp coming in with the tides and trout along with them.

“I still point my customers to the big outer bays for both reds and trout,” Payne said, “from Four Horse Lake on out through Lake Pato Cabello, Lake Campo, Lake Robin and the deeper bayous that run in out of them. Reefs, points and grassy islands can hold specks and reds, and if you fish pockets and coves and points along the shorelines of those same fringe bays, you should find some nice reds. Live shrimp is always the best bait when you can get it, but reds will also inhale market shrimp, and gold spoons and spinner-jigs have produced fish as well.”

Payne said deeper canals and bayous can hold redfish as well, and live or market bait fished on the bottom, or even soft plastics like H&H Sparkle Beetles in chartreuse, clear, motor oil or glow, fished in tandem off the bottom, should produce.

“I just follow the normal procedures; I want to find clean water, moving water, current lines around points or any signs of bait,” he said. “That’s where the fish ought to be.”

About Rusty Tardo 364 Articles
Rusty Tardo grew up in St. Bernard fishing the waters of Delacroix, Hopedale and Shell Beach. He and his wife, Diane, have been married over 40 years and live in Kenner.