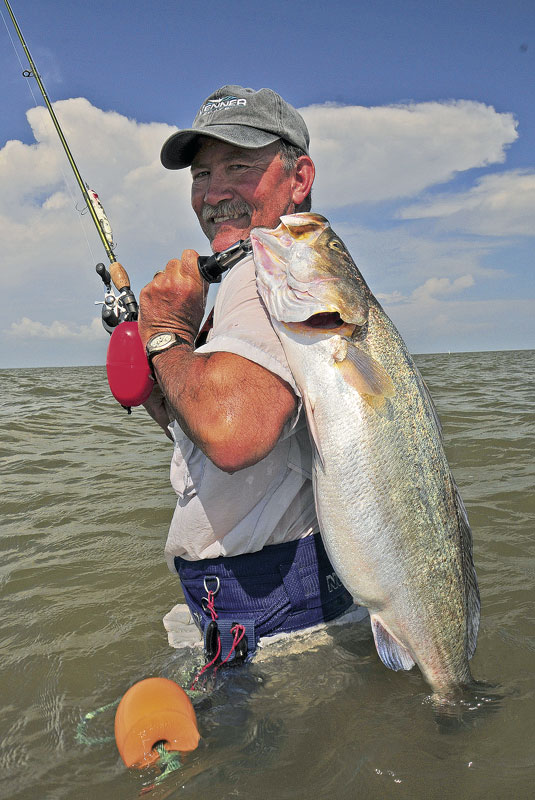 Wading for speckled trout is a great tactic on Lake Calcasieu, aka Big Lake, and it even works during August’s heat. Here’s how one expert does it.

Wade-fishing for trophy speckled trout during the summer can be a tough proposition.

Catching them in August is more challenging than in fall and winter, when fish stay in shallow water, but most fishermen welcome the challenge. If they wanted to make things easy, they’d stay in the boat. Wade-fishing is the angling equivalent of bowhunting for deer: the challenge is the point.

To be successful, wade-fishermen must employ some big-picture knowledge about what fish are doing in summer.

Jonathan Fisher of Opelousas has been a serious wade-fisherman for about 10 years. Apart from having one of the coolest last names an angler could have, he’s got some of that big-picture knowledge that will help you be successful this month.

Fisher got his start as an acolyte of Bruce Baugh, a well-known Louisiana angler, and like Baugh, Fisher can usually be found waist-deep in Lake Calcasieu in Cameron Parish.

“I like to wade-fish for big trout,” Fisher said. “Although some of the bigger trout come into shallow water to feed when it’s hot, they’ll move to deeper waters afterward where you can’t really get to them wade-fishing.”

To be clear, fall and winter are your best chances for catching big trout, especially when you are not using live bait, which Fisher never does.

Specks behave differently during summer, so even when they are shallow, they aren’t in areas you would typically find them in fall or winter.

“In winter, they’re in thick mud,” Fisher said, “so in the summer, we try to fish more on sand flats — or anywhere that’s sandy — where the water seems to be cooler.

“And we are always looking for oyster bottoms, little oyster reefs.”

But not all oyster reefs and sandbars will hold trophy specks. Remember, apart from salinity, water temperature is the core consideration when wade-fishing in August.

“Take Lake Calcasieu as an example,” Fisher said. “It’s got a big, deep channel that runs in the middle of it, so sometimes, we try to target reefs that are not far from the ship channel or from a deep canal where they can stay in cooler water and come up to the flats to feed.”

It pays to treat access to deep, cool water like any other resource, but one resource is not enough, not when you’re betting on catching speckled trout on the move.

“If we pull up to an area, and we don’t see bait moving,” Fisher said, “we won’t even stop; we’ve got to see signs of life.”

Trout won’t leave cool water during summer for the sake of adventure.

“Where the bait is, that’s where the trout are going to be,” Fisher said. “We like to see good-sized mullet jumping. We’re not looking to fish under feeding birds so much. A lot of school trout will be under the birds, but the big trout aren’t going to mess around in that so much; they’re independent.”

But how do you find these resource-rich spots?

“Experience,” Fisher said. Even after years of wade-fishing, “sometimes we’ve got to look at an area, jump out and walk, learn it.

“I feel like you learn the land better when you wade-fish, because you’re actually feeling it,” he said. “You know where the shell is, where it’s not. And that could be a 10-yard difference. You’ve got to just get out there and do it.”

“I’m throwing a topwater (lure) probably 80% of the time,” Fisher said. “The rest of the time, I might throw a Fat Boy or a Corky; sometimes I’ll throw a (soft-plastic) tail as it gets a little warmer, maybe just trying to spark a bite. But my go-to this time of year is topwater.”

“I like the Super Spook, the Super Spook Jr., and the Heddon One Knockers. Those are my favorites. To get some of those big trout to strike, I find you’ve got to throw a big bait, and top-water.… They’re usually feeding on the top.”

Plenty of acceptable options for rod and reels are available,  and like most anything fishing-related, you can spend as much as you want. The rod is the important element where wade-fishing is concerned.

“You want a rod that can make long casts and cover a lot of ground,” Fisher said. “You’ve got to think of why you’re wade-fishing. You’re doing it because big trout get spooked easily; You’re so cautious about not spooking them that you’re not running boats near them.”

The rod also must be sensitive enough to work a lure. That’s why you don’t see fishermen wading with surf-fishing tackle. There is a balance between range and control.

“I use what’s called ‘The Green Rod,’” Fisher said. “It’s sold by Fishing Tackle Unlimited, and it’s a 6-foot-6 rod that’s got a flexible tip that’s great for working a topwater lure.

“I use a Shimano reel, and I always use braided line with a 1½- to 2-foot Seaguar leader. I like to employ a 20-pound leader whenever I can, but when I’m in a shelly area, I will throw a 30-pound leader, just in case a fish dives and tries to cut the line on shell.”

Fisher believes the key to success in any type of fishing is experience.

Fisher had other advice for fishermen who want to add wading to their arsenals.

“Have good footgear,” he said. “You want to make sure you’ve got good wading boots, because there are things in the water. In the summer, you don’t need waders, but you’ve got to have a good pair of boots.”

“They go midway up the shin, and they’re made of a material that’s stingray proof,” he said. “If you are just getting into wade-fishing, or you want to do it every now and then, a boot like that is all you need.”

In the wintertime, speckled trout really key on baitfish, and that makes this primetime to throw twitch baits. […]