Want to catch bigger and possibly record trout on an artificial lure? Try these proven techniques.

If you want to increase the average size of the speckled trout you catch — while also increasing your chances of catching a trophy trout — you need to consider fishing jerkbaits.

Jerkbaits are one of the most-effective ways to deliver a convincing, big-meal presentation to bigger speckled trout without expending the time and energy required to catch, sustain and fish live bait.

The brilliance of a well presented jerkbait is that it can reach fish at almost any depth, produce lifelike movements and deliver the pause that drives speckled trout to attack.

Jerkbaits may appear similar in form to crankbaits, but they are miles apart in method of use and versatility. Crankbaits are designed to deliver a single action, regardless of the fisherman’s skill level. Jerkbaits can be made to deliver multiple actions, and they reward the fisherman for his or her level of skill and creativity.

Jerkbaits is hard baits with a distinct nose point and the tow point on the tip of the nose. They can have a small diving lip or be lipless. They can be floating, suspending or sinking. They are often called slashbait, ripbait, jerkbait, twitchbait or glidebait.

There are exceptions to these guidelines, but the common features of these baits is that they are almost useless on a straight retrieve, but when fished with skill, they are astonishingly lifelike.

Lipped jerkbaits may have a subtle movement on a straight retrieve, but they come to life when retrieved with jerks and pauses.

Lipless jerkbaits can be fished fast or slow, but typically slower than their lipped brothers. A slower action takes advantage of the ability of the bait to wander in an unpredictable, lifelike fashion when gliding after being twitched, like a baitfish that’s panicked or in physical distress.

It’s well-documented that predator fish are likely to strike first at baitfish that stand out from the others around them.

Jerkbaits are most-effective in clearer water, water with visibility greater than 12 inches, but they have been used effectively where water clarity is typically less than 12 inches, such as in the Delacroix marshes.

That said, jerkbaits are so effective in the clear waters of the MRGO channel, that it could be renamed “Jerkbait Alley.” Numerous times, I have had the pleasure of seeing 17-inch trout rise in clear water, and attack my jerkbait in the MRGO channel.

In colder water, less than 60 degrees, try a jerkbait that sinks. Twitch it up, and then give it slack line for a natural fall back toward the bottom. When the bait is falling, watch the line for a sudden movement indicating a trout strike, then set the hook.

Most jerkbaits in use are a quarter-inch or heavier, so adequate casting distance with baitcasting tackle is easily achieved.

Jerkbaits are typically worked with the rod angled down or to the side, so shorter rods from 6-foot to 6-foot-6 achieve the best rod angles. Most jerkbaits look more lifelike darting and suspending when kept near a horizontal position. To achieve this, hold the rod at a 30-degree downward angle, and apply action by snapping the rod tip down and back. Spinning gear has an advantage for this technique, because the hand is on top of the rod, and the wrist is simply curled to deliver the snap.

Sensitivity is important when fishing sinking jerkbaits with a slack-line technique. Tie your jerkbait on with a loop knot, which increases the free movement of the bait and theoretically further enhances its lifelike qualities.

Different jerkbaits work better when fished with different retrieves or techniques. Here are seven popular jerkbaits and techniques that match their strengths. These aren’t the only jerkbaits around, but they cover the range of styles and functions of jerkbaits regularly used.

Rapala X-Rap M08. The M08 is a 3 1/8-inch jerkbait that suspends and has a dive rating of 3 to 5 feet. It has a profile closely matching the inland silverside minnow or a bay anchovy but will catch trout weighing upwards of 4 pounds regularly. Work this lure with hard jerks and short pauses. It’s great in spring and fall, and especially when rapidly fishing a shoreline looking for scattered trout.

Rapala Shadow Rap M11. This is a suspending, lipped bait, 4 3/8 inches long, with a shallow diving depth of 2 to 4 feet. Because it’s a shallow diver, use it in warmer water around rock jetties and in shallow, marsh areas. It is best fished more slowly than an X-Rap, and the longer profile gives it big-meal appeal, like a medium-sized mullet.

Rapala Shadow Rap Shad Deep M09. This jerkbait is 3 1/2 inches long, with a 5- to 6-foot dive rating. This bait works on trout hanging in deeper water that will strike because of an aggressive bait presentation.

Rapala SubWalk M09. This is a lipless jerkbait, often called a twitch bait. Its 3 1/2-inch, full body gives it the profile of a meal-sized mullet. It’s labeled as suspending with a running depth of 2 feet, but it sinks readily, so it can be fished deep if a slower action is used. The SubWalk has a fluid movement when twitched; it will glide aimlessly when line tension is released. Fish the bait with a couple of twitches, followed by about 5 seconds of slack line.

Paul Brown’s Fat Boy Suspending. The Fat Boy is a big-profile twitchbait, even though it’s only 3 1/2 inches long. It’s called “suspending,” but in brackish water, it’s slow sinking. Paul Browns have a semi-rigid rubber body that is soft to the touch. Some of these lures, including the Fat Boy, have a bendable tail feature, which allows the bait to be set to rise or dive when twitched. Bending the tail down causes a dive and up makes it rise. Another special feature is its wedge-shaped body that makes it wobble from side to side when falling. This feature puts extra action into the fall, which is great because the trout typically strike a falling or resting bait. Fish the Fat Boy relatively slowly and allowing plenty of fall time. The sinking characteristic, combined with excellent twitch action, make this bait an excellent cold-water alternative to jigging swimbaits. 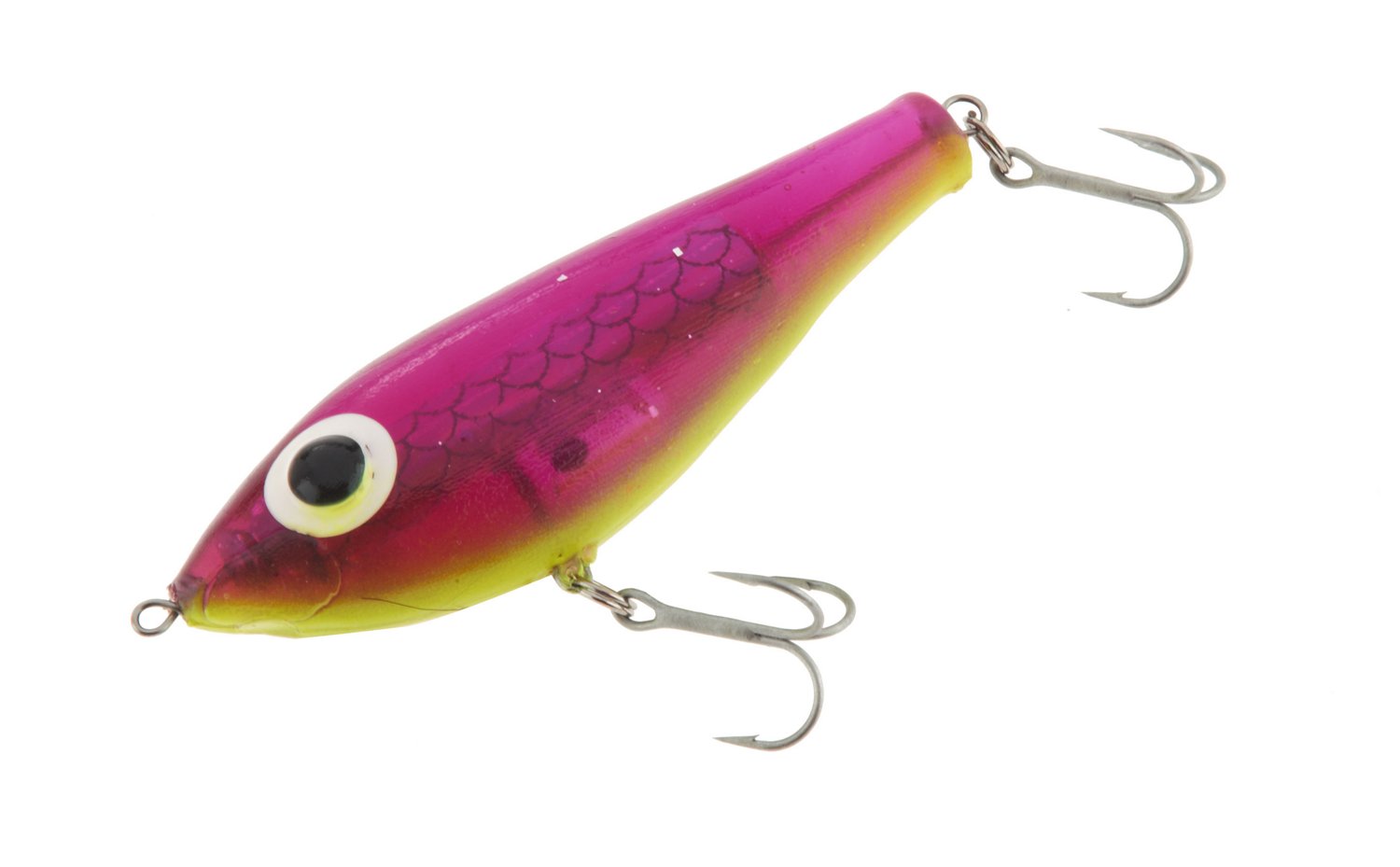 Paul Brown’s Soft-Dine Suspending. The Soft-Dine is a small-profile twitchbait that is 3 inches long. There is also a larger, XL version that behaves similarly. It’s constructed like the Fat Boy, sinks readily and has the same wobble on the fall. It does not have the tail adjustment. Throw this bait up against rocks, like the MRGO rocks, and give the bait plenty of fall time. This bait is very productive when fished slowly, but it can also maintain good action when worked with hard jerks, making it a good choice for fast-paced fishing.

Live Target Sardine Twitchbait. This is a floating twitchbait, that is 3 1/2 inches long, with a big profile. It will submerge to a few inches when worked. It has a nice, darting action, but the floating body makes the action more subdued as compared to suspending baits. Fish this bait over submerged grass beds, where it’s hard to keep a suspending jerkbait out of the grass.

After fighting a series of mishaps, Jared Serigné and his buddies put it all together and caught some bass on topwaters. […]

Devin Denman sets out from Rigolets Marina and ends up tackling the East Biloxi Marsh for a limit of speckled trout. […]

We found every speckled trout on the planet!

This time of year, speckled trout move to the fringe of the coast, and that’s where Marsh Man Masson and Justin Bowles went to look for them. […]