Fringe bays and islands around Biloxi Marsh doing well when weather permits. Anglers must get to the outside early before winds increase.

This past week has been slow for the fishing guides out of Campo’s Marina. Getting out to Bay Eloi and Christmas Camp Lake has been an ordeal due to daily squalls and high winds from the southwest, said Robert Campo.

“Yesterday (Aug. 11), it was dead calm in the morning but the wind picked up when the sun came up. So the guys that got out there early into that Christmas Camp Lake area did well.” Campo said, “They caught 25-30 fish real early but then the wind ramped up dirtying up the water.”

Campo also said the speckled trout will not go deeper into the Biloxi Marsh for six to eight weeks, but anglers are catching them on the islands near the shoreline.

“The speckled trout bite has been slow this past week but today (Aug. 12) they’ve (fishing guides) done better than the whole past week combined,” Campo said.

Many of the guides got to the outer islands around Bay Eloi and Christmas Camp Lake and were successful. Campo believes that the fishing is about to get even better when the southwest wind turns east.

“It will be getting better real soon. When that wind turns around it will be a feeding frenzy.”

And even though there have been shortages in brown shrimp in some areas lately, Campo’s Marina has plenty of brown and white shrimp.

Capt. Mike Gallo with Angling Adventures of Louisiana said that fishing the islands around Biloxi Marsh can be hit and miss when it comes to lunker trout.

“Might get out to an island and catch 40 trout but only six will be keepers,” Gallo said. “Other islands will be better. Just remember current lines and popping corks.”

Gallo said one person on his boat had a shrimp under a popping cork while another right next to him had a jig head with a Matrix Shad. Both were catching trout, so artificial bait is also a good choice. 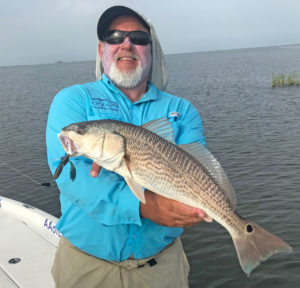 The redfish have been a different story. The redfish bite has been hot, with slot reds dominating the inland marsh. And the bull reds are beginning to spawn on the outside.

For redfish, Gallo says that first, anglers want to look for water that has movement and oxygen within the marsh. Second, he suggests anglers look for schools of mullet and to use bait of similar size.