Anglers are catching trout, reds out of this popular St. Bernard Parish port despite the spreading fresh water

The areas that Shell Beach anglers normally fish this time of year have gotten pounded from two directions by water that’s fresher than Arthur Fonzarelli on prom night.

A record-high Mississippi River has been spewing the stuff through every orifice, including Mardi Gras Pass and the Bonnet Carre Spillway while it was open. For Shell Beach anglers, that means the water is curling up from the former to the south and pushing in from the latter to the north, according to veteran guide Capt. Jacques Laboureur.

“If the spillway hadn’t been opened, and we just had to deal with Mardi Gras Pass, we’d be all over the Biloxi Marsh, but from Point Lydia all the way up to Isle au Pitre, it’s all fresh,” he said in early June. “The oyster guys are just trying to hurry up and harvest. They’re trying to get them out of there so they don’t lose them.”

Sounds like gloom and doom, and the world is coming to an end, right? Well, it’s not. Laboureur and the rest of the Shell Beach fleet are putting plenty of speckled trout and redfish in the boat, but they’re having to do things a little bit differently.

Almost every day, Laboureur has been heading to Breton Sound, but he’s not scanning for the factors that are normally so important to him. For one thing, he’s thrilled when he finds clean water, but he doesn’t even bat an eye if it’s putrid.

“You’re fishing, and the water is dirty, and you’ve got hyacinths floating past you, so you can’t not fish a place because it looks (bad),” he said. “You’ve got to stop and work it.”

Also, he’s not as concerned with finding bait on the surface, simply because that water up top is frequently so bad. That means he’s not even trying any technique that works the top of the water column. He’s getting down to the domain of sheepshead, croakers and pinfish — in addition to speckled trout.

“Buy a little extra bait, because you’re probably going to burn through it,” he said. “Literally everything I’ve been catching has been directly on the bottom — not on the fall. Your bait has to be on the bottom, and that means a lot of trash fish.

“Right now, everything we’re catching is on Carolina rigs, and I expect that will follow through August.”

The speckled trout Shell Beach anglers have been boating aren’t the bruisers for which Breton Sound is known, but they’ve been concentrated, thanks to the river water.

“We’re not exactly catching great fish out there,” Laboureur admitted. “We’re catching 13- to 15-inch fish. We used to call those Eloi trout or (Mississippi River-Gulf Outlet) rock trout back in the day. At this point in the game, we’re just glad to catch them.”

The Chandeleur chain has also been productive, and the fresh water has resulted in at least one positive there.

“Typically, we have to deal with a bunch of sharks,” Laboureur said. “We bring extra hooks. But I don’t think I’ve caught but one shark this year, so we’ll see if that changes.” 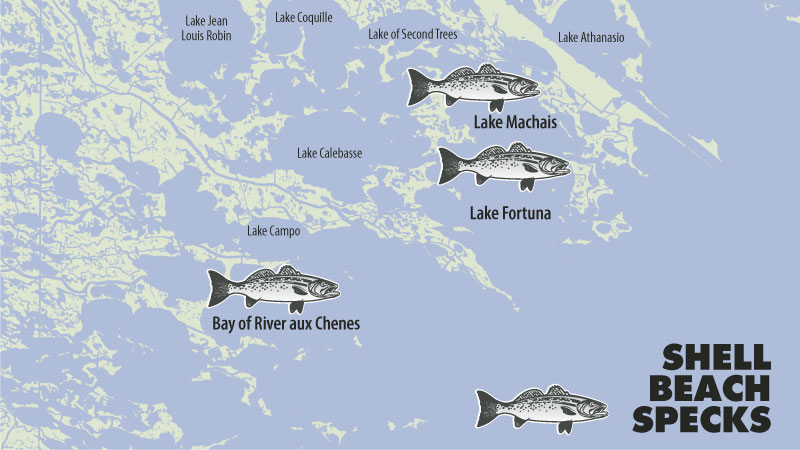 Though the interminable river flow has shuffled the deck for speckled trout, it’s actually been a boon for redfish, Laboureur said.

“The redfish seem to be loving the fresh water,” he said. “They’ve gone absolutely (crazy).”

Laboureur said the productive July pattern for reds couldn’t be easier, even though it’s impossible to predict what size fish you’ll catch.

“The redfish are going to be more toward the bordering bays,” he said. “They’re not going to be in the duck ponds. They’ll be more in places like Lake Machias, Lake Fortuna, Black Bay, Oak River Bay — those edge bays. The interior stuff just gets too warm.

“It’ll stay that way until September when everything cools off, and then they’ll move back in.”

To catch them, Laboureur baits his clients with live shrimp under popping corks.

“If we get into a bunch of babies, which is something we’ve been dealing with a lot this year, I’ll put plastic on,” he said. “Once you get them riled up, they’ll hit whatever.
“We’re catching everything from undersized fish all the way up to bulls. Whenever you try to catch the bulls,” Laboureur laughed, “you get nothing but babies, and when you want some small eaters, you get nothing but bulls.”

One place that’s been a disappointment so far this year, however, for both speckled trout and redfish, has been both the short and long rocks of the MRGO, Laboureur said.

“I’m hoping this July that the river will finally crest and come down, and we can finally get some consistency out of the rocks,” he said. “The fish have to show up there eventually.”