October offers fantastic fishing, but it can also be frustrating as cold fronts push in howling winds. But this Lafitte backup plan will keep your rod bowed and your ice chest full.

Listen carefully and you’ll hear a universal sigh of relief as we close the door on September and the peak month of hurricane season.

Not that October can’t get nasty and produce tropical systems — and, officially, the hurricane season doesn’t close until November.

But, unofficially, we know that once we get past September the potential for the worst is over.

Now we can exhale. 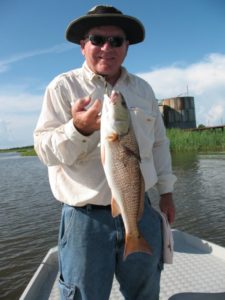 And now that we’ve put some distance between us and the August floods, things are settling into some semblance of a rhythm again. Which means it’s time to go fishing again.

After all, it’s October: Summer is finally releasing its stranglehold on the thermometer, and some genuine cold fronts usually show up this month. It’s not as humid. The air feels cooler, even brisk some mornings.

It’s definitely time to dust off the reels and knock the cobwebs off the rods, and get back on the water.

This is the month I start thinking of frisky trout, hungry redfish, and Lafitte.

I called Capt. John Pounders, who operates Eccentric Charters (504-382-2268) out of his camp in Lafitte, to see if I could twist his arm to take me fishing.

Pounders set a date and fishing buddy Bob Mercer and I showed up at his new place at sunup for a Lafitte adventure.

The captain, who has been — pardon the pun — pounding the waters as a Lafitte charter guide for 26 years, said he was catching plenty of very nice-sized trout out around Four Bayous, and if we were up for the ride the result could make it worth our while.

But he also cautioned it could be a roll of the dice because the action outside this late in the season is spotty at best and the winds were already beginning to kick up. 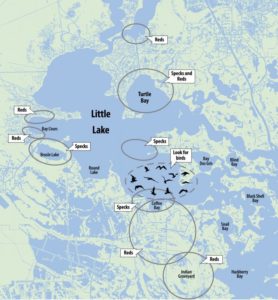 We could boom or bust.

We decided to gamble, so we climbed aboard with Pounders and his dad, John Sr., got comfortable on the beanbag behind the windshield in his 24-foot rig and made the 45-minute run to the hopefully happy fishing grounds.

Once there, we were met by stiff winds and bumpy, ugly water. We tried to catch some trout despite the conditions but were forced to say “uncle” and head elsewhere.

A quick attempt at glory over around Coup Abel didn’t pan out, either, so it was bust on the outside.

We headed inside to hunt reds.

“This is typical this time of year,” Pounders explained. “The fish are definitely transitioning toward the inside marshes as we move steadily into fall, so mid-range areas are safer bets right now.

“But some days, when all the conditions are just right, you can still hit a home run out here and take home a boat load of big trout.”

Our Plan B was to fish the area around Coffee Bay, where specks typically show up this time of year at the points in Little Lake, but stiff winds and stained water also made that area inhospitable, forcing us to switch gears and target reds.

Which was Plan C.

Pounders kept this card hidden up his sleeve, to be pulled out only if the game got desperate. We were several hours into our trip with nothing in the box, so he pulled out the ace and took us to the sure thing.

He said he’d been catching numbers of small to medium-sized reds along the wall in Bayou Rigolets. They weren’t big fish, but they were more than legal size, aggressive, plentiful and — if we wanted some excellent table fare — this was our chance to put some on ice for the grill.

Pounders took us to a break in the wall and stuck us in place.

“The technique here is simple: a dead shrimp on a 3/8-ounce jighead fished right up against the wall,” he said. “Let it settle to the bottom and wait for them to take it.”

And take it they did.

We quickly had multiple bites, although every bite didn’t result in a hookup.

The reds were there, but so was everything else. Junk fish also wanted our shrimp, so we waded through them to put some reds on ice, and the bronze beauties started coming over the gunnel with consistency.

Pounders said he has a few favorite areas he’ll target this month for spot tails:

1) The ponds south of Coffee Bay

“Park and shop redfish at the drains, cuts and ditches from the marsh,” he said. “Park your boat in the canals and fish live or dead shrimp under a cork. The key is to fish at the drains on a falling tide, or if you have a rising tide get up in the ponds and fish points.

“Toss gold spoons or shrimp under a cork, or Gulps under a cork. You want to look for clean water and of course, any sign of baitfish.”

Located at the west end of upper Hackberry Bay, this area produces both trout and redfish.

Pounders fishes it with live shrimp or Gulps suspended about 2 feet below a cork.

“Fish points all around the broken marsh islands,” he explained. “I like to troll this area until we get a bite; then I set the Power-Pole down and we see if we can put some fish in the box.

“Try casting on all sides if the action slows or stops, and then resume trolling. You can fish this area on any tide, as long as you find clean, moving water.”

“The rocks on both the north and south ends of Bay L’Ours hold reds, and we pick up trout there sometimes. as well,” Pounders said.

Again, he normally parks his boat to fish.

“Generally, I anchor at the breaks or cuts in the rocks, and we fish the bottom with dead shrimp on a 3/8-ounce jighead,” Pounders said. “Try not to toss into the rocks themselves or you’ll snag bottom. Keep your bait about 2 feet off the rocks if you’re fishing bottom, or you can throw gold spoons around the rocks as well.”

4.) The bulkhead wall in Bayou Rigolets

The rocks and bulkheads all along the east and south ends of Bayou Rigolets are worth fishing, and the area consistently produces reds, the guide said.

Pounders fishes the breaks or cuts in the wall with dead shrimp on 3/8-ounce jigheads on the bottom.

This was the area we happened to be fishing — near the Harvey Cut — and the reds were cooperating.

We’d anchor up, thread whole dead shrimp on our jigheads and cast right up against the wall.

John Sr. said you want to get your bait as close to the wall as possible because reds are hunting strictly by smell in these cloudy water conditions and they’ll snug up right against the wall as they travel along it.

“The water is 5 to 6 feet deep here, and the current can be strong,” the elder Pounders said. “Let your bait go to the bottom, and then get the slack out of your line and wait for a hungry redfish to find it.”

We did exactly that and discovered that you’d catch fish if you bumped the wall with your bait, while if your cast landed just 2 to 3 shy of the structure your bait went untouched — except by the occasional catfish.

We’d pick up several reds in one spot until we fished that hole dry and then move to another break in the wall and do it again.

The fish ranged from 17 to 21 inches, on average, with several getting into the 23- to 25-inch range. Not whoppers, but their sheer number made up for it, and these really were the perfect eating size for either blackening or grilling.

About Rusty Tardo 364 Articles
Rusty Tardo grew up in St. Bernard fishing the waters of Delacroix, Hopedale and Shell Beach. He and his wife, Diane, have been married over 40 years and live in Kenner.