Storms and hurricanes that go somewhere else along the Gulf Coast do a whole lot of good for the fishing in south Louisiana.

For south Louisiana residents, Sept. 10 is a day that’s both feared and celebrated. That’s the date, historians tell us, that more tropical systems have existed in the Atlantic Basin than any other date.

Leading up to Sept. 10, the region climbs a devilish roller coaster of destruction, with higher potential for storms each day than the day before. Worried residents watch newscasts and surf the internet, scanning for any twist that might suck up warm ocean waters and turn them into Mother Nature’s pinwheel of death.

After that date, though, the ride no one wants to be on begins to head downhill. The chances for tropical activity are still sky-high, but each day provides a bit more safety and security than the one prior. 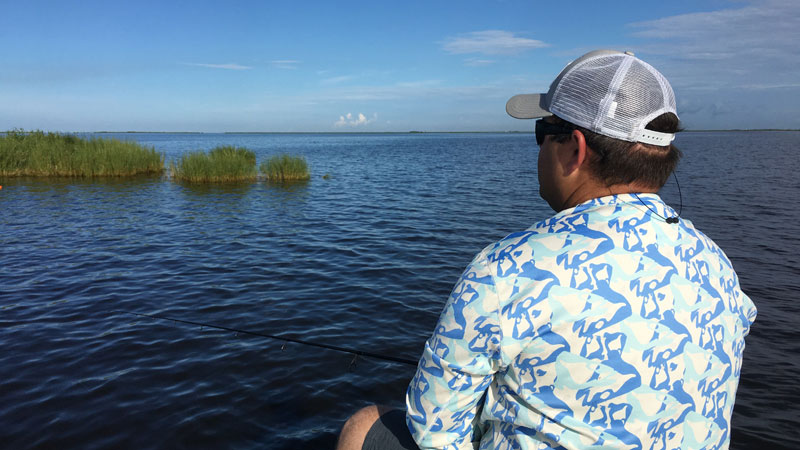 Residents just have to get past Sept. 10.

In all actuality, the Louisiana coast is missed by storms more years than it’s hit. Even those that enter the Gulf are more likely to go somewhere else, simply because we’re a relatively small percentage of the linear coast.

But that doesn’t mean we don’t feel impacts from storms that race to Texas, Mississippi, Alabama, Florida or even Mexico. Our shingles may all stay intact, and all our trees may remain standing, but along the coast, even distant storms leave their mark.

Most often, that’s in the form of elevated tides, and in September, those “storm surges” usually set in motion a chain of events that lead to some really good fishing.

That was certainly the case last year when Tropical Storm Gordon lurched into the Alabama coast in early September. Classes were canceled across southeast Louisiana in anticipation of the storm, but residents surely wondered why. Throughout the approach and landfall, skies were clear and winds were light out of the east, then the north.

Along the coast, however, tides were 2 feet above normal. That flooded a few docks, and although it may have been inconvenient for tennis-shoed anglers, the surge provided a big-time payoff, according to Corey Gradwohl, a Delacroix guide.

“The fishing changed overnight with Gordon,” he said. “All of a sudden, there were redfish everywhere we went.

“Tropical storms, in general, make the fishing awesome. They bring the salinity level way up, and the bait gets pushed in. The fishing gets really good, because the fish follow the bait.”

Gradwohl said he and other guides went from fishing all day for limits of reds to catching them in the first hour of the day, often at their first stop.

It’s often shrimp that seem to get pushed in with tropical events, Gradwohl said, but last year, it was mullet. They were simply everywhere when the storm was blowing in water, and they never left once it retreated.

“It’s always a really good sign if you see shrimp in the interior marsh, but it doesn’t have to be shrimp,” Gradwohl said. “They eat mullet, too.”

Fishing is great while storm tides are high and after they retreat, Gradwohl said, but he fishes very differently depending on water level.

“While the water’s up, you want to get where you normally can’t get,” he said. “Push way back into the ponds that are normally too shallow. Get in there, and get real tight to the grass. The fish will be right up against it.

“Once it starts to fall, the bait gets sucked out, and the fish just wait on it.”

In either situation, Gradwohl targets the fish with live shrimp about 2 feet under Four Horsemen corks. When the water’s up, he throws the bait as close to the edge of the spartina as he can, often casting onto the grass and dragging it off. When the water’s lower, however, he’ll fish as far as 10 feet off the shoreline.

But he almost always focuses on points.

“Fish every side of the point. Make just a few casts. You’ll know it if they’re there.”

But don’t camp in one spot too long, he advised.

“Even if you make a cast and catch a fish, if you don’t catch another one in your next 10 or 20 casts, move,” he said. “Don’t sit in one spot, especially this time of year. Those fish are on the move. They’re very active. So you want to move a lot as well.”

Gradwohl said some points will deliver just a handful of fish, while others will produce 20 or more. And productive points change by the day. He seldom catches significant numbers at a particular point two days in a row.

There are also no magic destinations, Gradwohl said. Literally, the entire marsh will be holding fish, although some areas will certainly be better than others on a particular day.

“If the water level’s high, push back into the marshes along those lakes,” he advised. “You’ll see fish back there tailing and pushing. If it’s normal height or lower, fish the shorelines, focusing on the points.”

No one wants to see Gulf Coast residents get hit by a tropical storm or hurricane, but unfortunately, it’s the rent we pay for living in such an incredible part of the world. Storms are going to come, and someone’s going to bear the brunt of them.

You may feel a bit like Nero, fiddling while Rome burns, but Mother Nature delivers a whole lot of good with the bad. You might as well take advantage of it.

What you need to know

The popular port of Delacroix is located in St. Bernard Parish, just about as far east as you can get by car in Southeast Louisiana.

Water access is provided at either of two marinas, Sweetwater and Serigne’s, both of which charge $10 to access their backdown ramps. Both marinas offer fuel, ice, drinks and limited tackle and food. Sweetwater also features lodging.

The fishing during or after a storm surge can often be so good that anglers will catch their limits of redfish within minutes. That can leave them wondering what else to do.

A good option in the Delacroix area is to target bass.

September isn’t exactly prime time for the green fish, but they will definitely bite this month, according to guide Corey Gradwohl.

He targets them first thing in the morning by throwing frogs or buzzbaits over matted grass. As the sun gets higher, he moves to areas with sparser grass and throws weedless gold spoons, like Johnson Silver Minnows.

Even in September, it’s easy to catch a few, and limits are certainly not unheard of. They become even more likely in the months ahead, Gradwohl said.

“The bass fishing will get better as we get closer to fall and that water cools a little bit,” he said.