As water temperature drops with fronts coming through in fall and winter, finding deeper water is often the key to fishing success.

In the shallow marshes of southeast Louisiana, deep is a relative term. However, point your kayak towards the rock dam on the Mississippi River Gulf Outlet in Hopedale, and you can fish the deepest inshore waters available. The dam is easily accessible and provides a wide variety of species throughout the cooler months.

The MRGO is a man-made shipping channel built to offer oceangoing ships a short cut to the Port of New Orleans. But minimal usage, high-maintenance costs and massive coastal caused by the channel acting as a pipeline for saltwater intrusion, led to its official decommissioning in 2007 and the final rocks placed on a dam built across it in 2009. The MRGO was also widely blamed for a huge storm surge that devastated St. Bernard and parts of Orleans parishes during Hurricane Katrina.

The “dam” as it is known to local anglers, has become a hot spot for anglers fishing the Hopedale area. For kayakers, a special kayak launch at Hopedale Marina makes access into Bayou LaLoutre easy, and a marked kayak lane in the bayou gives ‘yakers a protected course to paddle down the bayou to the MRGO while staying out of powerboat traffic. The dam is an easy, 1.3-mile paddle from the marina.

The dam’s big attraction for fishing is water depth, rocks and concentrations of baitfish and shrimp. While the dam is a solid structure preventing the passage of all marine traffic, the large rocks allow water to sift through the cracks and crevasses between them. Tidal flow is surprisingly strong when you get close to the dam. Fish and bait gather near the structure as the water flows through during rising or falling tides.

Fishing the dam takes a little getting used to. Many anglers are not accustomed to fishing the extremely deep water around it. The middle of the channel has depths up to 44 feet, and its cross-section shows a gradual slope upwards towards a shelf in the mid-20s that gets shallower heading towards either bank.

However, the rocks themselves offer some of the biggest challenges. When the dam was constructed, a wide base-layer of smaller rocks was placed on the bottom to support the larger boulders in the upper portion of the dam. Therefore, rocks line the bottom over a much larger area than is visible above the water. Countless lures, sinkers and anchors are lost daily from getting hung on the bottom.

To avoid anchor loss, rigging with a breakaway setup is a must. This method hooks your chain to the bottom of the anchor and uses a plastic zip-tie to secure it at the top of the shank. The anchor sets normally, but if it gets hung in the rocks, a hard pull breaks the zip-tie, allowing the anchor to be pulled up backwards, usually freeing it from the rocks. While not a full guarantee, it works more often than not. Carry several extra zip-ties when fishing the dam.

Trout, reds, flounder and sheepshead are caught at the dam, along with the occasional largemouth bass. Jack crevalle are also around in the early fall. As noted, anything that hits the bottom is likely to get snagged in the rocks. Tight-lining soft plastics, working crankbaits or suspending twitch baits are all productive, but be cautious of letting them get all the way down to the bottom or you likely won’t get them back.

Although the water is extremely deep, don’t rule out throwing topwater baits parallel to the rocks. Fish cruise the rocks to feed on the bait that is often seen at the surface along the dam. 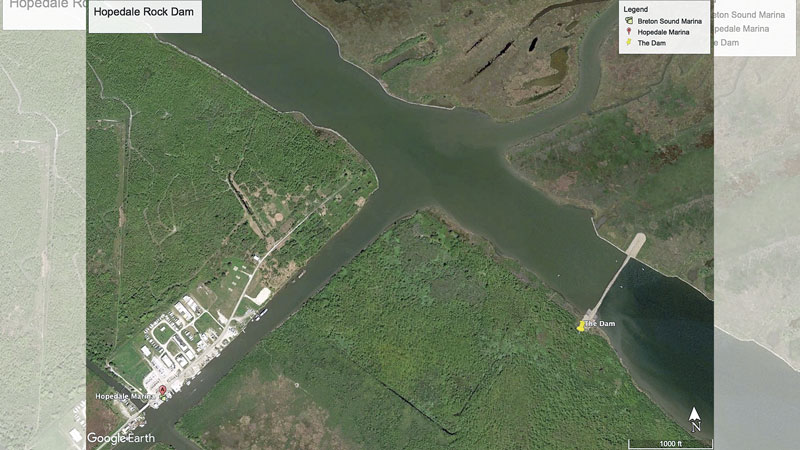 On the rare occasions where you have it to yourself, try trolling up and down the rocks.

Of course, live and dead bait are always good bets. Popping corks work well to give the bait some extra action and keep it off the bottom. A sliding cork works well to get baits and jigs near, but not directly on the bottom.

A depth finder is an invaluable tool for kayak anglers fishing the dam. You can see the bottom type to know when you are over the rocks, as well as find the ledges and drops.

Many anglers like to fish the Gulf side of the dam. While boats can make the long run through the marsh to get to the other side, it is impassible by kayak. However, if you travel light, taking only minimal gear, kayaks can be carefully portaged over the dam to get to the other side. Extreme caution should be practiced, as the rocks often shift and move underfoot, and injuries from falling can be serious. Do so only with a partner to share the load and be slow and deliberate when making the crossing. It is a chore, but often the fishing and minimal crowd is worth the extra effort.

The dam is a community hole. It is no secret and gets its fair share of fishing pressure. Expect to be fishing in close quarters, often within easy casting distance of other boats. Courtesy is key for having an enjoyable outing at the dam. However, it has easy access and consistently provides great fishing opportunities.

About Chris Holmes 236 Articles
Chris Holmes has kayak fished in the Gulf of Mexico, the Atlantic and Pacific oceans and many places in between.