This south Louisiana marsh offers tremendous fishing for saltwater and freshwater species alike. Tactics are about the same. That means every bite has a surprise waiting on the end.

The west side of the Delacroix Marsh offers some of the best fishing in south Louisiana. It’s one of those rare places where you never know what is going to be on the other end of your line. The marsh offers a variety of fishing opportunities, whether you are after specks, reds, bass, flounder, perch or catfish. The methods of catching limits are as varied as the species.

The Delacroix Marsh, which is in St. Bernard Parish, is best described as brackish, fed by a variety of freshwater sources. It is considered a tidal marsh, as it is influenced by the Gulf of Mexico. The west side is surrounded by relatively shallow Lake Lery and Lost Lake, with a multitude of small ponds scattered throughout. It is these small ponds and canals where the action heats up. 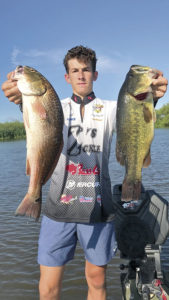 Dead or live shrimp fished on the bottom or under a cork is almost a sure thing when fishing for reds. Soft plastics and topwater baits are highly effective. Green, chartreuse and black or any combination thereof are consistent go-to colors when the water is clear to slightly stained. Brighter colors — white, yellow/chartreuse or combinations — are best when confronted with cloudy water.

Spinners like the old tried-and-true Beetle Spin are awesome for bass and reds. Purple with a gold blade is hard to beat. Gold or black weedless spoons are a great choice for fishing the weedy areas. 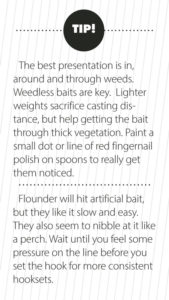 The fish react best to topwater baits during low-light conditions, such as dusk, dawn and heavy cloud cover. But that doesn’t mean they won’t hit a frog or a buzzbait at noon on a clear day. The key to finding fish is water depth and cover. After the sun comes up, fish will move to deeper water and more cover. Points with moving water that has a depth of 2 feet or more is going to hold fish. Weed lines in the lakes and ponds hold a lot of fish, particularly when the tide is falling. When fishing banks with weeds, keep that bait coming all the way to the boat. Many times, the fish will follow the bait out of the weeds and into clear water before they hit.

Points, points, points. If you pass a point with 2 feet of water or more on it, you are most likely passing up fish. There are thousands of points and the fish are there. Not all points are obvious high banked points. Don’t overlook the less obvious points. Small islands can be very productive, but you must fish all sides. The windy side or current side is usually most productive, but the back sides can also hold fish waiting for the baitfish to be pushed to them.

Pilings, sticks and other hard structure items hold fish. The area is scattered with duck blinds, oil production pilings and cane reeds that the fish seek out for cover. Slow-fishing this structure will almost always produce bass and redfish.

Grass beds are everywhere, but they are often shallow. Don’t let the water depth discourage you from trying. Look for holes in the grass. Cast well beyond the hole and let that frog or Texas-rig worm fall into the hole and hold on. Many times, these holes represent a little deeper water that you might not be able to discern from the boat. Any deeper hole surrounded by grass is going to hold fish.

The trenasses in the area can fill an ice chest in no time. Typically, these ditches hold a little better depth and more fish. The things to look for are moving water, mixing water (clear to cloudy or vice-versa) and water depth. Many times, even if the tide is not moving, wind on the lakes and larger ponds will push water through the trenasses, turning on the fish just like tidal movement. The great thing about them is there may be multiple points throughout the length of the trenasse that gives you multiple opportunities to cast to new areas. 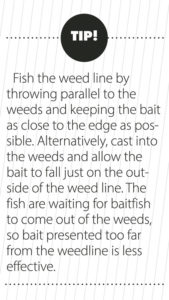 If a deep hole — 3 to 10 feet — doesn’t produce, don’t give up on it.  Wait until conditions change even slightly and go back to it.  The fish will be there and they will bite at some point during the day.

If artificial lures are not your thing or just don’t seem to be getting enough finned attention, market or live shrimp usually will. Split shot weight and shrimp-laden hook dropped into water with depth and current is hard to beat. A weighted jighead with or without plastic with a piece of shrimp on it will catch reds and flounder. Corks are optional, but popping corks are preferred. Again, cast as close to the points as possible and work the bait away.  The fish are usually right up on the bank, so that’s where the bait should be.

About John Smith 6 Articles
John H. Smith is an experienced attorney. Growing up in Houma molded an avid outdoorsman. He lives in St. Amant and works out of his office in Baton Rouge. John’s law firm has a superlative record representing those requiring legal assistance, redressing any number of civil wrongs committed against their life, limb or property. His website is www.smithshanklin.com.