Guide Brandon Huskins loves catching flounder as much as anything else, and while he loves to catch them on live bait, his favorite method by far is to fish artificial shrimp on a tandem rig.

“My secret for catching flounder all-year long is my tandem-rigged bait. I rig two of the same lures on fluorocarbon line staggered 3 or 4 inches apart,” he said. “When the first comes across, it gets their attention, and then they will hit the second one as it appears in front of them. You can cover a lot of ground fast, and you will get more strikes and put more fish in the boat by using this method.” 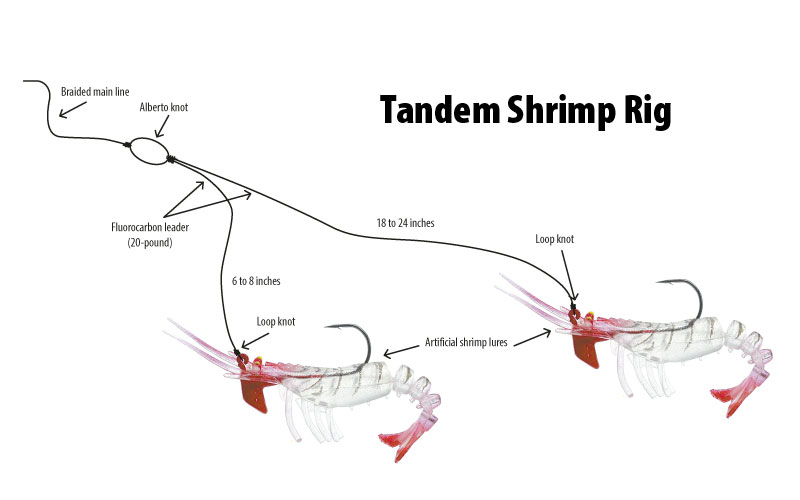 Huskins starts with braid on his reel. He takes a long piece of fluorocarbon, leaving an extra-long tag end, and ties it to the braid with an Alberto knot. He cuts it down to an 18- to 24-inch main leader and a 6- to 8-inch leader made from the tag end. To both, he uses loop knots to tie to jigheads and VuDu Shrimp.

“Flounder will stage up along creek mouths to catch mullet and “I like to drift with the tide along the narrow creeks and channels, bouncing Vudu Shrimp along the bottom,” he said. “You don’t miss as many fish with the shrimp, and you can also cover a lot of ground by using artificial lures. Flounder will not turn down a shrimp fluttering along the bottom, either.”

About Jeff Burleson 6 Articles
Jeff Burleson is a native of Lumberton, N.C., who lives in Myrtle Beach, S.C. He graduated from N.C. State University with a degree in fisheries and wildlife sciences and is a certified biologist and professional forester for Southern Palmetto Environmental Consulting.