Surf fishing can be extremely effective, or it can be maddening. Here are some keys to help you be more effective when wading along the state’s beaches.

My mom used to rebut my anti-broccoli sentiment with that classic parental logic line: “You’ll never know if you like it unless you try it.”

Much like my counterpoint of seemingly more-attractive options — chocolate chip cookies, for example — I think the reason surf fishing is a under-appreciated by some Bayou State anglers is that A) many folks haven’t tried it and B) most would rather stick to the marsh and the rigs.

There’s no problem with that preference, but just as that broccoli of my childhood actually helped balance my diet, I’d submit to my angling brethren that getting out of the boat might open your eyes to a different — not necessarily better, just different — way of enjoying a day with the rods.

For one thing, you can also more easily enjoy a day with the family. Think about it: Jumping in the boat with your hard-core fishing buds brings the unspoken functionality born of a common focus. You’re all on the same page, you’re all equally committed.

But what if some in your group are less experienced, less interested, maybe a little awkward with the gear? Do you trash the idea of a family fishing trip?

Heck no; you adjust the focus, tone down the serious competitive stuff and enjoy a memorable day that puts more emphasis on memory making than then whackin’ and stackin’.

Surf fishing offers the ideal theater for such relaxed, laid-back scenarios — with family or anyone interested in a day that’s big on potential but low on performance pressure. You set out some bait rods in the sand spikes, you tie on a couple of jigs for walking and casting in the shallows, you have a picnic lunch, you build a sand castle.

Go as serious or as casual as you care — the surf does not judge.

Following are some tips on maximizing your time waist deep in the surf.

There’s no lack of pre-existing beaches, but the state’s efforts to stem the tide of coastal erosion and rebuild the Mississippi River delta marshes has recently bolstered naturally occurring surf spots.

Capt. Anthony Randazzo of Paradise Plus Lodge in Venice said his guides work their way in toward the beaches, casting shoreward. However, he noted that recent efforts to rebuild barrier islands affords anglers several nice options for fishing with their feet on the sand.

“The Pelican Island area along the western shores of the Empire/Buras area will surely be a big hit for surf fishermen in the not-too-distant future,” Randazzo said. “Many cubic feet of Mississippi River sand have been transported via dredge and pipeline to this area, where heavy equipment has manicured a well-strategized beach/ hurricane protection barrier.

“The work has taken many months, but is obviously producing noticeable results. The top of the beach is literally 20 feet high at its peak and more than a football field in width. The entire span is a couple of miles between the Empire jetty and Bay Coquette. Additional work is being done west of the Empire jetty.”

Randazzo also included Breton Island in this discussion. As he describes, this historic east-delta land mass was submerged by Hurricane Katrina, but efforts to rejuvenate this important island have restored its surf-fishing potential.

“The restoration there is complete and very functional,” Randazzo said. “A comma-shaped island has been restored as of a couple of years ago. Anglers can wade for a long distance on either side of the island.

West of Pelican Island, additional renourishment work on Shell Island offers another coastal pit stop, as does the lengthy sands of Bastian Island.

These spots, along with several isolated beaches on both sides of East Bay (notched between Southwest and South passes), offer broad, sandy stretches on which to beach or anchor a boat and wade ashore and then fish from shore.

However, the state’s premier coastal destination — Grand Isle — is easily accessed. Here, the northern end of the spit of sand at Grand Isle State Park sees lots of trout surf action, while Elmer’s Island across Caminada Pass is another great option. 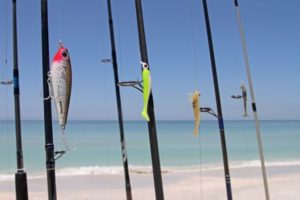 Diversifying the options, the Grand Isle park offers a fishing pier that extends access to the surf, while jetties at both ends and breakwaters offer fish-attracting structure.

Surf-fishing spots are probably more abundant than most folks might think, so just pick the one you like and learn to read the beach.

The ocean’s shoreline holds a treasure chest of fishing opportunity, but unlocking this bounty requires the right combination of factors.

Surf fishing enthusiasts know that any stretch of beach could offer the action they seek; however, those vast expanses present the confusing challenge of deciding where to start.

The key is realizing that a beach is not simply one continuous stretch of sand and sea. Rather, it is a combination of elements that define its differences.

Florida wade-fishing guru David Gill said there are a few features of any beach that help him identify a general area of higher opportunity.

“When I hit the beach, I scan the coast and look for something different,” Gill said. “Anything will do, but I scan for something that just catches my eye. This tells me there is a sandbar or current or piece of structure close by.

“I also look for different wave action and direction, or (a sign) that something is going on there.”

Between the shoreline and the first sandbar, and then between successive bars, the lower troughs appeal to the feeding habits of trout, redfish, black drum and sheepshead, while also presenting natural travel lanes for all surf species.

Waves break over bars and flatten their energy across troughs, so learning to see the surf as more than a jumble of white water is essential for targeted casting.

You’ll also want to note any “run-outs” — uneven furrows that usher receding waves toward concentrated exits. Basically random in formation and location, run-outs could extend several hundred yards into the Gulf. Along the way, they form natural feeding points for surf fish, which take advantage of the food that gathers in these lanes.

“That works good if you have some wave action, but if the water is flat and calm you really have to look hard for run-outs or V’s in the returning water as it washes out,” Gill said. “Confused or crisscrossing water is a good sign to fish both sides, as well.

“I also look for dips or low spots in the sand — areas that have been washed out by current and indicate a run-out.”

Also, spotting baitfish schools or diving birds is a good sign, as this forage won’t go unnoticed by predators. You might see a dark mass moving through the waves or you might see individual baitfish leaping out of the water, as larger fish chase them below the surface.

Surf fishermen should always take note of any hard structure, from breakwaters to the beach side of inlet jetties. This solid habitat holds a baitfish and crustacean buffet, so expect concentrated fishing opportunities.

Once you find a promising spot, decide if you want to target the smaller, edible species; the big catch-and-release stuff; or a combination of the two.

The good thing about surf fishing is that, with the exception of bull reds and big sharks, you can use the same medium-heavy baitcasting or spinning outfits you’d use in the marsh for most of what you’ll encounter.

Controlling a big fish from shore is more challenging than running him down from a boat, so beef up to an 8- to 9-foot heavy/medium-heavy spinning outfit for the heftier targets.

For any natural bait presentations, you can certainly hold-and-hope, but you’ll do better to spread three or four rods along the beach, set them in sand spikes and pass the waiting time by casting jigs, plugs or spoons for trout, reds, etc.

Berkley makes a nice, lightweight, aluminum spike with foot pegs, but do-it-yourselfers can fashion their own spikes from PVC pipe with a 45-degree angle cut at the bottom.

Accomplished Georgia surf angler Spud Woodward said that, with any sand spike/rod holder, it’s best to have the reel standing a few inches above the holder’s top edge so you can more easily remove the rod to fight a fish.

Woodward accomplishes this by drilling a hole in the upper end of his homemade PVC holder and inserting an eye bolt. Inside the holder, this stops his rod butt, while outside, it offers a handy attachment point for clipping a bait bucket or fish stringer.

Crabs are another good bait for the surf. One of the best is a mole crabs (aka “sand fleas”). Surf anglers catch these little nuggets by watching for them tumbling up with each wave and quickly digging into the sand, or digging them up with a specialty tool called a sand flea rake (long-handled aluminum basket with a raking edge).

Gill takes a whole blue crab, clips off the claws, legs, paddles and apron, and clips the body in half (between the eyes). He uses half on a big rig for bull reds, and then clips the other half in to chunks between the leg sockets. The “crab knuckles” are great for smaller reds, drum, croakers, etc.

Editor’s note: For a detailed look at the tackle, tactics and geography of fishing from beaches, piers and jetties, check out Sportsman’s Best – Surf Fishing (floridasportsman.com/store and amazon.com).