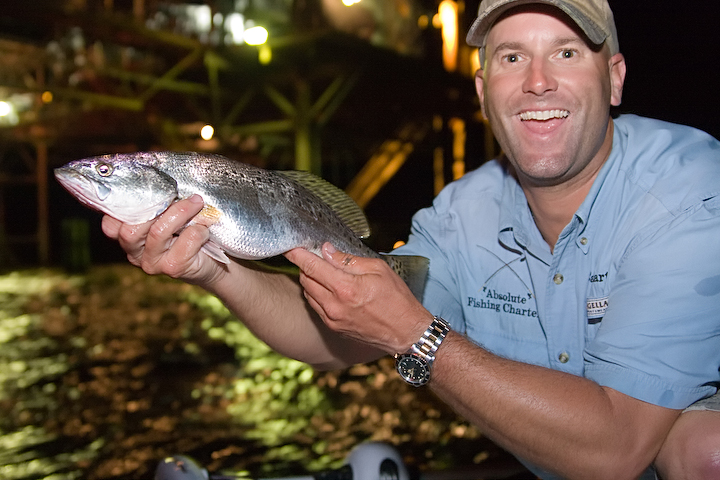 If the oppressive heat blanketing Louisiana the last couple of weeks has you thinking about trading your coastal camp for a mountain retreat, Captain Marty LaCoste with Absolute Fishing Charters (985-856-4477) has a suggestion for you. “Wait ‘till the sun goes down, and you’ll find the trout fishing heats up as the temperature cools down.”

LaCoste has been trying to get me to take a nighttime trout trip with him for a couple summers, but I’ve always believed there were better things to do at night than fish. However, a couple of his text messages the last few weeks finally convinced me to stock up on energy drinks and give it a shot.

I met LaCoste and his charter-captain buddy Joel Wakeland at the end of LA 315 in southern Terrrebonne Parish early yesterday evening. Our plan was to work tandem-rigged soft plastics around the lights on some of the rigs just west of Coon Point. A couple of friendly anglers that were loading as we were launching gave us their leftover minnows, which we gladly accepted as our insurance policy.

As we cleared the mouth of Bayou DuLarge, LaCoste pointed his boat toward a familiar-looking rig. We had fished Ship Shoal 26 a few times during the daytime, but in the blackening twilight, it took on an ethereal appearance as its lights flickered through the late evening haze.

“Those lights are what we’re going to fish,” LaCoste said. “If you’re going to rig fish at night, it’s all about fishing the lights. We may have to wait a while for everything to settle down and the shrimp to start popping, but sooner or later, the trout bite will turn on like a switch, and we should be able to load the boat.”

LaCoste pulled up to the edge of his favorite light and deployed his anchor in such a way to hold his boat right at the edge of the darkness. This particular position allowed all three of us to fish two separate lights, which we were hoping would double our chances of quickly filling our limit. Seagulls soon began to work the shadowy edges.

“I’ve never caught anything under the birds while night fishing these rigs,” LaCoste pointed out after I made a couple of casts toward them. “I guess they’re feeding on the shrimp out there, but the shrimp should start hanging out around these lights pretty soon. When they start popping the trout start biting.”

The three of us were throwing various glow colored soft plastics with chartreuse tails. LaCoste and Wakeland had on a couple ReAction Bayou Chubs, and I was throwing a V&M Marsh Minnow and MirrOlure Soft Sardine just to give the trout a different look.

After about 30 minutes with no bites, LaCoste explained that this was the point at which many anglers get discouraged and go home. What would seem like an automatic hot spot can be frustrating to fish when the fish don’t cooperate. Recalling LaCoste’s point about how the bite can suddenly turn on, we continued to put in our time.

The shrimp eventually started popping around 10:30, but they were at a different light. LaCoste pulled up his anchor and made the quick troll over to the action on the opposite corner of the rig. A couple of cast produced a couple quick bites, and LaCoste thought out loud that the switch had been flipped.

As we struggled to keep up with the number of trout that were going in the ice chest, LaCoste explained that this was typical of rig fishing at night.

“I always start where I’ve done best in the past,” he said, “but you never know what these trout are going to do. And I’ve never been able to pattern where they’ll be based on the current either. I’ve caught them upcurrent and down current. It’s all about where the shrimp are because that’s where the trout will be.”