Use these tactics to put more live bait in your boat

For some, that reality may cause beads of sweat to form because they have to finally unravel that net and rekindle the memory of those horrid taco-shaped casts that draw howls of laughter.

Fortunately, there are those who don’t mind sharing what they know about catching live bait with a cast net, trap or trawl, and then keeping it all so that it works when the fish get hungry.

Capt. Mike Parks of Slidell spends his fair share of days on the water. When he needs fresh bait, the cast net is the only way to get the best.

“The cast net is my only tool,” said Parks. “Get the heaviest one that you can. I like a 7- to 9-foot net thrown Frisbee-style by grasping the mesh from underneath and placing one weight in my mouth.

“Never throw by the lead, and don’t assume that a 7-foot net is harder than a 3-foot net. Anything smaller than 6 feet is more difficult, won’t catch much and will reduce the distance you are able to throw.”

Read the manufacturer’s instructions, and then get out and throw, throw, throw until you get it down. Sore back and abdominal muscles are well worth it.

When Parks is fishing, he uses a cast net to draw in all sorts of bait for inshore and offshore fish alike. His strategy for catching bait will cause some to scratch their heads and others to laugh — until they start loading up on bait.

“People around here sometimes catch 30 pounds of shrimp a night with a cast net and Tops dog food. Tops is the key because it sinks like a rock. Throw about four Mardi Gras cupfuls in each place you can cast a net, and give it an hour.”

Find an area where the water is either funneled into another body of water like a culvert or a cut in the marsh, and make several casts there  and catch what you can. The big secret is crushed crab. Drop that in the water out of the current line off to the side. Shrimp love the jelly meat of crab, and the scent draws them instantly.

First of all, you have to be set up with the right live well for shrimp. “Shrimp will not live long at all in a live well if it is not a round tank. That’s very important. You have to have air or water pumping in the tank because shrimp have to be swimming in a current. And it does no good to catch live bait if you’re not set up to keep it alive.” 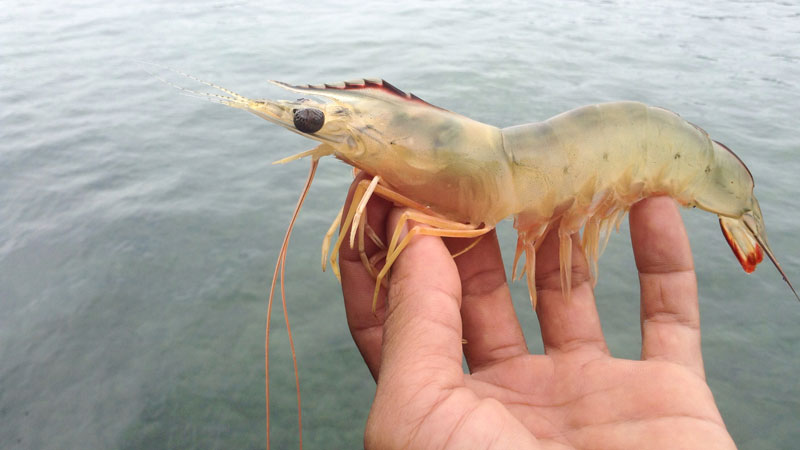 Another bait that anglers like to use is live cocahoes.

Cocaho minnows are easy to keep alive. You can find very inexpensive traps at most sport shops. The best bait for them is cut pogies.

Tide plays a key role in where to trap them.

Look for a tide that leaves an area real shallow at low tide — not empty, just very low. Cocahoes are eaten by everything, so they look for cover, and when the tide rises they go into the marshes. When the tide drops, they harbor in shallow waters near the marshes so you want to put your traps at the cuts near shallow marshes.

For croakers, move to deeper, moving water, and he use either a cast net or a trawl.

Find an area that has current in about 5 to 7 feet of water, and throw cut-up rib cages from the fish cleaned the day before in the area. Then start cast netting again, or use a 14-foot trawl. The key to catching them with a trawl is you can’t drag long. Five to 10 minutes and that’s it, and you have to hurry and get them out of the net especially if there are jellyfish in the catch. The jelly will get in their gills and kill them quick.

Parks will load up the freezer with pogies, aka menhaden, when they stack up in nearby waterways. Later, he uses them on big-game outings.

“Pogies stink,” he said, “but they’re easy to obtain if you have some time and can cast a big net. Over here, the Eden Isle canals, Tchefuncte and West End get stacked with them. All pogies make ‘nervous’ water, and small ones tend to flip on the surface.

“You can see them when they’re big and can catch them by the hundreds, big or small.

“With a chest freezer handy, you can take them straight from your net into 5-gallon buckets — take my advice and get lids — and freeze them.

“In their own slime, they will last much longer than the cardboard flats you get commercially. I try to fill everyone’s freezer available when pogies come around.”

If live pogies are what you need, find moving water and keep that bait tank clean.

Cast net for them in current lines off of points where the current is ripping around a bend. Pogies regurgitate when they are caught just like any fish that gets a hook in its mouth — they throw up to try and spit the hook. Well, the bile they throw up will kill everything you just caught if your livewell is not in continuous circulation.

If you’re putting them in a portable livewell, you’ll have to let them purge. To do that, you have to put them in a 5-gallon bucket of water first for about three to five minutes, and then transfer them into the good water in the portable tank.”

In addition to pogies, there’s another easily attainable bait that fish love.

Live mullets are an excellent bait. Amberjack love them, and cobia think they’re Tic Tacs. When they’re cut up, they stay on the hook very well for snapper and white trout.

You can cast net for them around almost any fishing pier. Mullets are like cows at night — they can’t see very well, so they harbor around structure for protection from predator fish. Again, it’s very important that they be kept in a round tank with circulating water.

Sign Up Now
About Marty Cannon 21 Articles
Marty Cannon is a teacher and varsity football coach in Iberia Parish. He enjoys spending time in the outdoors with his family and friends.