Sure, you can go out and catch a box of trout this month. But if you really want to have some fun, head to that waters around Plaquemines Parish to battle redfish — big redfish.

Gary Abernathy was sure he saw a fish move off the tip of a grassy point on the south side of a little cut between islands.

Could’ve been mullet, but Abernathy fired his Live Target Mullet toward the nervous water — and about seven twitches later he watched that ultra-realistic bait get an ultra-realistic smack down from a 35-inch redfish.

Not 30 minutes before, Montet had launched his Skeeter bay boat at the Buras Landing Boat Ramp off Highway 11 just a short hop from his home base at Cajun Fishing Adventures.

Running out to California Point, he shut down 50 yards from one of his fellow guides, who would work the opposite direction.

Abernathy’s catch followed two by our counterparts and seemingly popped the lid on the school’s aggression, because the next 90 minutes saw us bring no less than a dozen 20- to 35-pound copper brutes to the boat.

That number could have been much higher, were it not for a detail-obsessed photographer who just can’t get enough of shooting bull reds.

Thankfully, the fish couldn’t get enough of our baits, and we enjoyed the arm-stretching challenge for which bulls are revered, until we were ushered out of the area by a pop-up storm.

Giving the storm a wide berth, we located another group of bulls about five miles away and basically repeated the process.

So what are the keys to staying in the fray this month?

Each time the action waned, Montet scanned the water for wakes, boils and “nervous water” — all signs of reds on the move.

Mullet jumping, baitfish or shrimp flipping or birds hovering near the surface: Consider these cues to bull red presence.

“In August and September, when (reds) start gathering together for their little happy time before they spawn, you can see them moving or pushing water when it’s calm,” said Capt. Mike Frennette of the Venice-based Redfish Lodge. “That visual element is exciting because you can set up the boat so the fish are coming to you.

“Nothing is better than sight-casting for your fish.”

Now, you might think a pile of bull reds sauntering through shallow water would be impossible to miss — and usually, that’s true.

“It’s incredible how stealthy a large school of big bull reds can be in 2½ to 3 feet of water,” he said. “There are times when there could be 500 of them and they move so slowly that you may not even see a motion on the water until one of them just eases across the surface and swishes his tail enough to make a little movement.

“When it’s calm, it only takes a little movement to spot that school. I’ve literally had huge schools of fish come toward me and I didn’t know they were there until they were right at the boat.”

Frennette has certainly seen the other side of bull red schooling — prominent wakes, splashing, surface busting. In most cases, however, the real heavyweights are calmer than folks might expect, he said.

Consistently, the most dependable region for bull reds has to be Louisiana’s Mississippi River Delta. Here, Capt. Anthony Randazzo looks for the big fish on the outer edges of the marsh, where vast flats and shoals bordering the coastline offer feeding convenience and access to the Gulf’s cooler deeper waters.

As Randazzo pointed out, the summertime aggregation of bull reds coincides with the natural abundance of forage species. These predators, he said, follow migrations of pogies, mullet, and crab, so when you find them, they’re almost always in the mood to eat.

“We often locate the bull reds by watching for surface explosions and/or around fish slicks,” Randazzo said. “Once the fish have been located and continue to feed, it’s easy to identify more fish by watching the surface for more of the same.

“Occasionally, pelicans can be seen diving where the bull reds are targeting baitfish. It’s all about paying attention to the signs that Mother Nature shows us.”

Frennette knows that, regardless of whether the day finds his fish rambunctious and easily spotted or playing coy, managing the opportunity is critical.

Minimizing noise and easing around on low trolling motor power is the best plan.

But if the school bolts, it’s not the end of the world.

“They can be easily spooked and, even if you get a shot at them, they’re not going to stick around,” Frennette said. “But they’re kind of like a deer: They’re going to take off 30 to 40 yards and settle down.”

So he said it’s a matter of tracking the direction the fish move.

“You fight your fish and have one person keep an eye on where that school went,” Frennette said. “You might not see them, but they’re going to be fairly close.”

If this captain is trying to locate a spooked school, he’ll often “bump” his trolling motor to goose the school just enough to make them disclose their position.

The reds typically rise, but quickly settle back into a fishable position.

A big no-no, Frennette said, is rushing the situation by running up on the fish with the outboard engine. Eschewing such cowboy tactics, he pointed to patience and precision as intrinsic to this game.

“Two things I value greatly are my Motorguide Xi5 trolling motor because it has the Anchor Lock system and my Power-Poles,” Frennette said. “Both of those are critical to me.”

Favoring incoming tides or the tail end of an outgoing cycle, Frennette said he positions his boat in front of a school, sticks his Power-Poles and use his the trolling motor to keep his bow pointed at the fish.

The GPS-guided Anchor Lock technology automatically adjusts the boat’s position if wind or tide swing the bow out of optimal position.

From shrimp to split blue crabs to cut pogies, mullet or threadfin herring — there aren’t many natural baits bull reds won’t gobble on a circle hook.

However, Frennette said it’s hard to top the fast-paced thrill of using artificials.

Bassmaster Elite Series pro Greg Hackney agrees. He doesn’t have a lot of time for saltwater fishing, but when he does, one of his favorite deals is idling a barrier island surf and casting a ¾-ounce Strike King Redeye Shad lipless crankbait or a Redfish Magic spinnerbait with a ½- to ¾-ounce flats jighead and a swimbait body.

Randazzo said he keeps his summer bull red presentations simple, with a pair of offerings that’ll handle the majority of fish he encounters.

His first choice is a Heddon Super Spook, a hefty topwater that walks well and provides a big profile for bulls to locate.

“My second choice is a ¼-ounce Bomber Saltwater Grade Shad Head jig with a Yum Mud Minnow rigged 24 to 30 inches below a Bomber Saltwater Grade Paradise Popper,” Randazzo said. “This rig will make the big fish eat when all else fails. The commotion created by the popper calls the fish to the easy prey hanging slightly below the surface.

“Hook-up percentages are better than 90 percent.”

Although shallow flats are his favorite bull red scenario, Frennette won’t hesitate to fish the Southwest Pass jetties when conditions are not right.

Here, bumping a Strike King 8.0 square-bill crankbait over the rocks or running a Redfish Magic spinnerbait along the structure are good bets.

However you tempt your bulls, understand that these fish will test your tackle with astounding strength and a stubborn resistance fueled by a seemingly endless power supply.

That’s why Frennette holds bulls in such high regard.

“They’re a lot of fun on light tackle,” he said. “Besides jack crevalle, they’re the baddest little dude out there.”

They will tire, eventually — but only with diligent fighting technique that relies on two things:

1) Let the fish run when it wants to run.

2) Leverage every resting moment to gather line with a smooth cadence of pumping up and reeling down.

“A lot of people like fishing for speckled trout because they like to go home and eat speckled trout,” Frennette said. “But the majority of my clients want that battle that you’ll only get from a bull red.”

I have never fished the Mississippi Delta during the summer months without getting chased off a spot by a pop-up storm.

So-called for their propensity to overtake an area with frightening speed, these typically short-lived meteorological temper tantrums are not to be taken lightly.

They pack a mean punch, with bursts of strong wind and that bright, crackly stuff that chars whatever it touches. 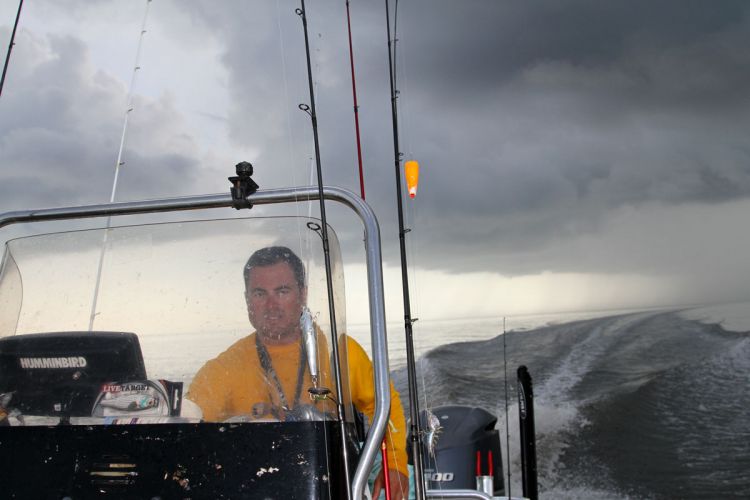 For instance, during a Buras outing with Capt. Ross Montet, Gary Abernathy and I were trading compliments on our recent bull red double-header when our typically laid-back guide suddenly became animated.

“Get ya’ll’s stuff, now!” Montet shouted, as he fired up the big motor.

Instinctively, I grabbed a handrail and secured my camera case, as Abernathy stowed the rods. Within seconds, we were on plane and racing away from a fierce, black beast that growled angrily and clawed after us with sizzling streaks of gilded rage.

OK, that might be a little dramatic, but these pop-ups really are bad news — and distance is your best defense.

• Check the day’s weather forecast for the area you plan to fish. Use geography to your advantage by fishing leeward bays during rough periods, and have a bug-out plan in mind in case you need to hightail it to safety.

• Maintain situational awareness by keeping an eye on the horizon. You want to spot the leading edge of a storm before the monster springs forth.

It’s easy to get so distracted by a hot bite that you don’t notice that ominous form rising behind you. Once you feel that rush of cool air, you’re usually out of time. Most navigational units include weather functions, while the Navionics app puts this info right on your Smartphone.

• Maintain an orderly deck. Stow unused rods in holders, put loose tackle in compartments and keep nets, tackle bags and food/drink items in their proper places. Loose items create tripping hazards and impede your ability to quickly pick up and run from the next pop-up storm.

This bayou is always hot this time of year!

For decades, Jeff Bruhl of Madisonville has been fishing Bayou Liberty on the edge of Lake Pontchartrain for speckled trout. […]