With a devastating hurricane season behind them, Kirk Stansel, his brothers and the staff at Hackberry Rod and Gun are looking forward to fishing for speckled trout, redfish and flounder again in Calcasieu Lake.

Speckled trout fishing was good soon after Aug. 27, the day Hurricane Laura pulverized southwest Louisiana after making landfall near Cameron with 150 mph winds. Hackberry, a small community of about 2,000 residents, felt the storm’s wrath along with everything in its path.

Speckled trout fishing had returned to its high level again less than a month later when Delta, the 25th named storm of the Atlantic hurricane season, crashed into the coast just 13 miles from where Laura entered the Sportsman’s Paradise. Hackberry received 17 inches of rain in four hours.

Stansel, who has been a guide for more than 40 years, and brothers Guy Stansel and Bobby Joe Stansel, started cleaning and repairing and got their business back on its feet each time.

“We’ve got it put back together. It’s operational,” Kirk Stansel said.

First and foremost, Stansel warns boaters to avoid the eastern side of the lake, particularly the northeastern area, where storm debris litters the water. Vehicles still were on the levees, a good indication there are storm-tossed vehicles and tons of metal underwater, he said.

Traditionally, the northeast area from Deatonville to Commissary Point is a December hotspot for wading fishermen to catch BIG speckled trout. Steer clear until after the U.S. Army Corps of Engineers marks storm debris with GPS coordinates and barges go in to handle the cleanup, advised Stansel, who pointed saltwater fishermen to West Cove and Joe’s Cove on the western side.

“There’s a lot of trout and redfish. The water’s not very pretty, and we’re still catching,” he said.

If it’s a warmer December, speckled trout can be caught on the reefs that lace West Cove, but if it’s colder, the speckled trout push deeper, and they’re difficult to find.

The redfish action should be good, no matter what.

To fish the reefs, Stansel uses a heavier leadhead jig, like a 5/16- or 3/8-ounce, and drifts on the calm days. On windy days, hit the shoreline and beat the banks. 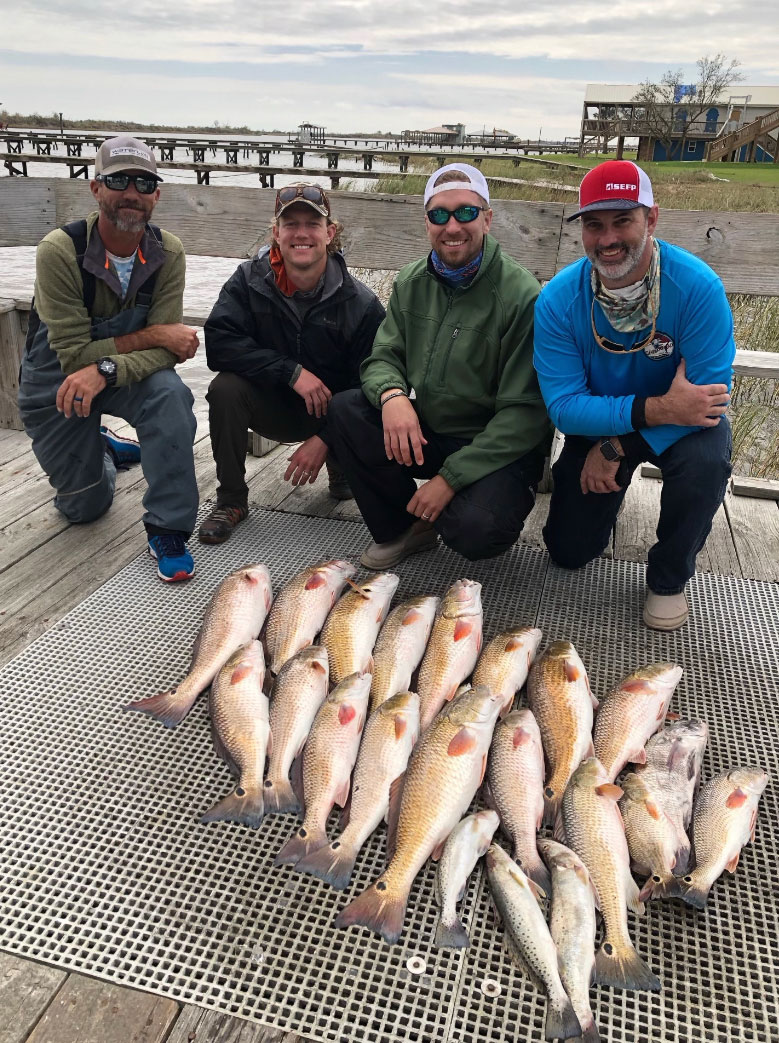 “I go to the calm shoreline for redfish,” he said. “They usually hang out close to bayous coming into the lake, sometimes 200 yards away.

Those who like to wade for speckled trout should target them in Joe’s Cove with Corky’s Fat Boys. Fish wherever baitfish are present along the shoreline, where the muddy bottom in shallower water warms more quickly.

In clearer water, throw gold/chartreuse or pearl/chartreuse. In stained water, try a bone-colored model with a black top and chartreuse belly.

“When the water’s cold, you’ve got to work them slow. If you catch them one day, it doesn’t hurt to throw topwaters,” he said.

When the water temperature’s in the 50s and there’s a warming trend, fish move shallow.

“That’s when the lake fishing gets good. When it warms up fish go shallow,” the veteran fishing guide said.

(Warning: Many areas of the lake, particularly on the eastern side, are still littered with storm debris from Hurricanes Laura and Delta)

The Delta Lures Redfish Spinnerbait has been the downfall of beaucoup redfish since Fred King and Roy LaBorde introduced it in the mid-2010s. […]