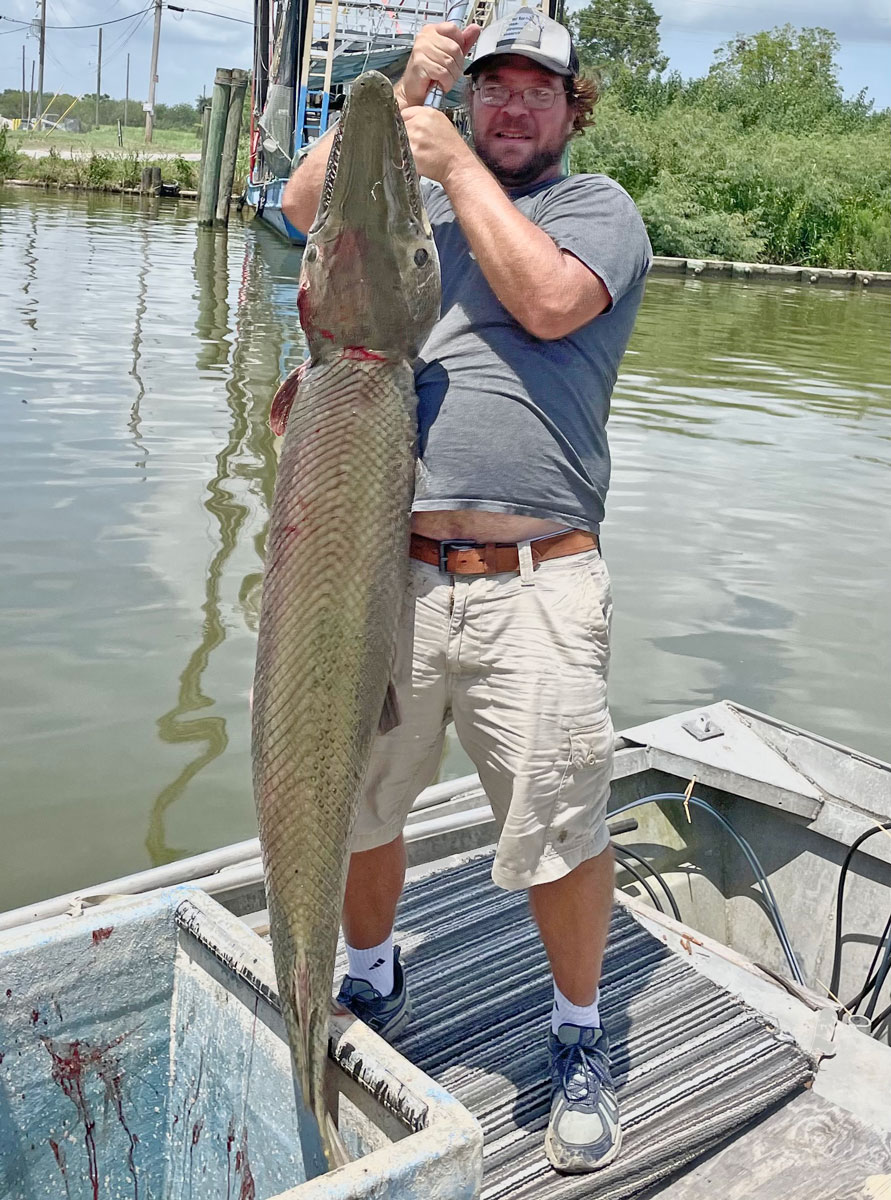 Dr. Grant McCall, an anthropology professor at Tulane from New Orleans, caught a monster, 6-foot-6 alligator gar while fishing on the Mississippi River near Mardi Gras Pass on Aug. 22.

McCall and his 4-year-old son, Adrian, were fishing with Glen Swift, a commercial, long-line catfish angler who often assists McCall in his research of prehistoric (Amerindian) mound sites in Plaquemines Parish.

“I’d mentioned to him that I was going to be (in the Empire area) with my son, and he suggested that we go out on the boat and fish,” McCall said. “I knew my kid had never been on a boat before, so I thought, ‘Yeah, let’s do it!’”

After setting off from Delta Marina at 9:30 a.m., the three fishermen headed for Mardi Gras Pass.

They searched the pass for a suitable place to fish, eventually settling on a small, shallow bay that abutted a cow pasture. They pulled their boat onto the shore, and fished from the bank.

“I was fishing with what I refer to as my ‘Frankenpole,’ which is a weird combination of stuff,” McCall said — a 7-foot, Coastal Tough rod wearing a Zebco 606 reel spooled in 30-pound braid.

McCall had fished in a marsh the previous day and had not replaced his tackle, which consisted of a 50-pound monofilament leader tied to a modified, 3-way rig with a ½-ounce bank sinker on one line and a short, steel leader sporting a No. 5/0 circle hook on the other.

“It was from fishing saltwater the day before; I’d been afraid of getting cut off by a redfish or something like that,” said McCall, who was even using cut mullet left over from the previous day’s trip.

“He looked at his phone and mentioned something about it being 93 degrees outside,” McCall said. “I (thought) it was more like 193 degrees.”

Try as he might, McCall found it difficult to focus on fishing. He had his son to think of — a task made more difficult by a bull that was running around behind them in a field. But somehow, with a wary eye on the cows, he noticed a little tug of his line.

As he pulled the rod from its holder, McCall felt a second, harder, jerk.

Hung up, then hang on

“I set the hook,” he said, but the sinker caught on the bottom. “I was just kind of snagged.”

Luckily, the secondary line attached to the sinker broke, and the fish “took off halfway across the canal,” McCall said. “And from there, it was all about wearing it out with the drag on my reel.” 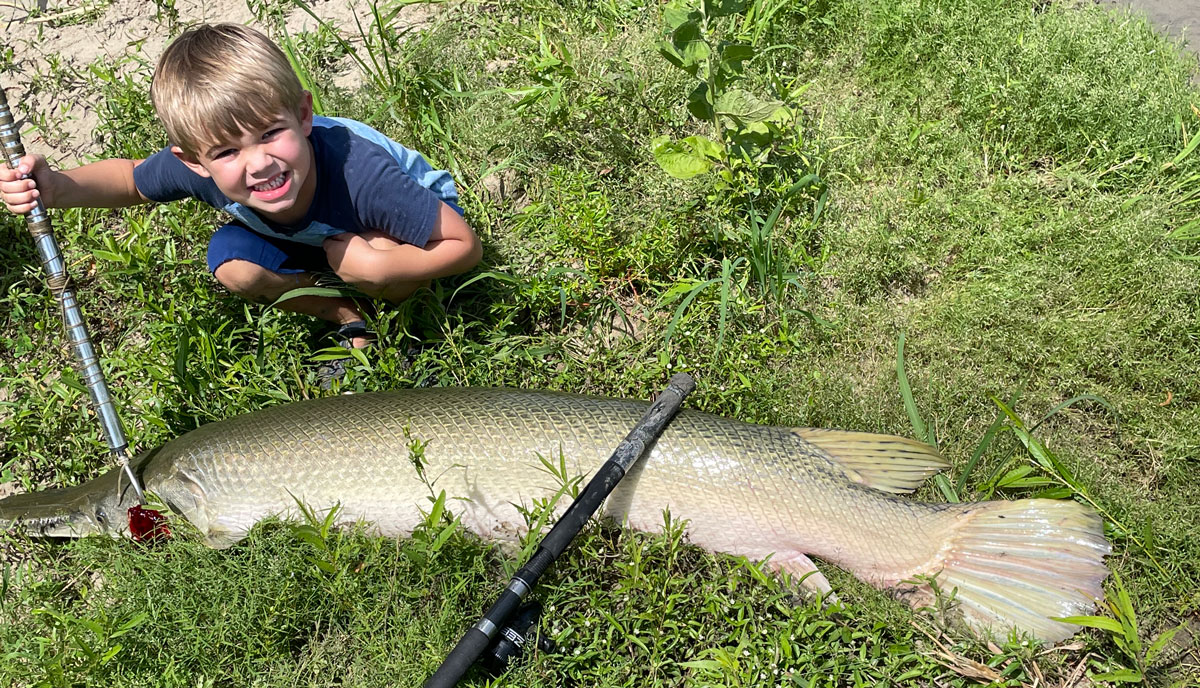 “It was a shallow bay, the depth trailing off gradually,” McCall said. “So, I pulled the fish up into the shallows. (Swift), who is in his 70s, was like a ninja; he got in the water, and with one swift stroke, gaffed the fish in the head, just above the gills, and pulled him onto shore.”

McCall didn’t have scales big enough to weigh the fish, but he estimated it at between 110 and 120 pounds.

A vocation and a calling

Originally from St. Louis, Dr. McCall has lived in Louisiana for almost 15 years. In addition to his work at Tulane, he is director at the Center for Human Environmental Research, a non-profit institute concerned with coastal restoration.

“The coast is important to me, and I started tuning into that through archaeological research and through fishing,” he said. “But my wife is convinced that (it) is an elaborate excuse on my part to go fishing,” he said, laughing. “And I don’t disagree. 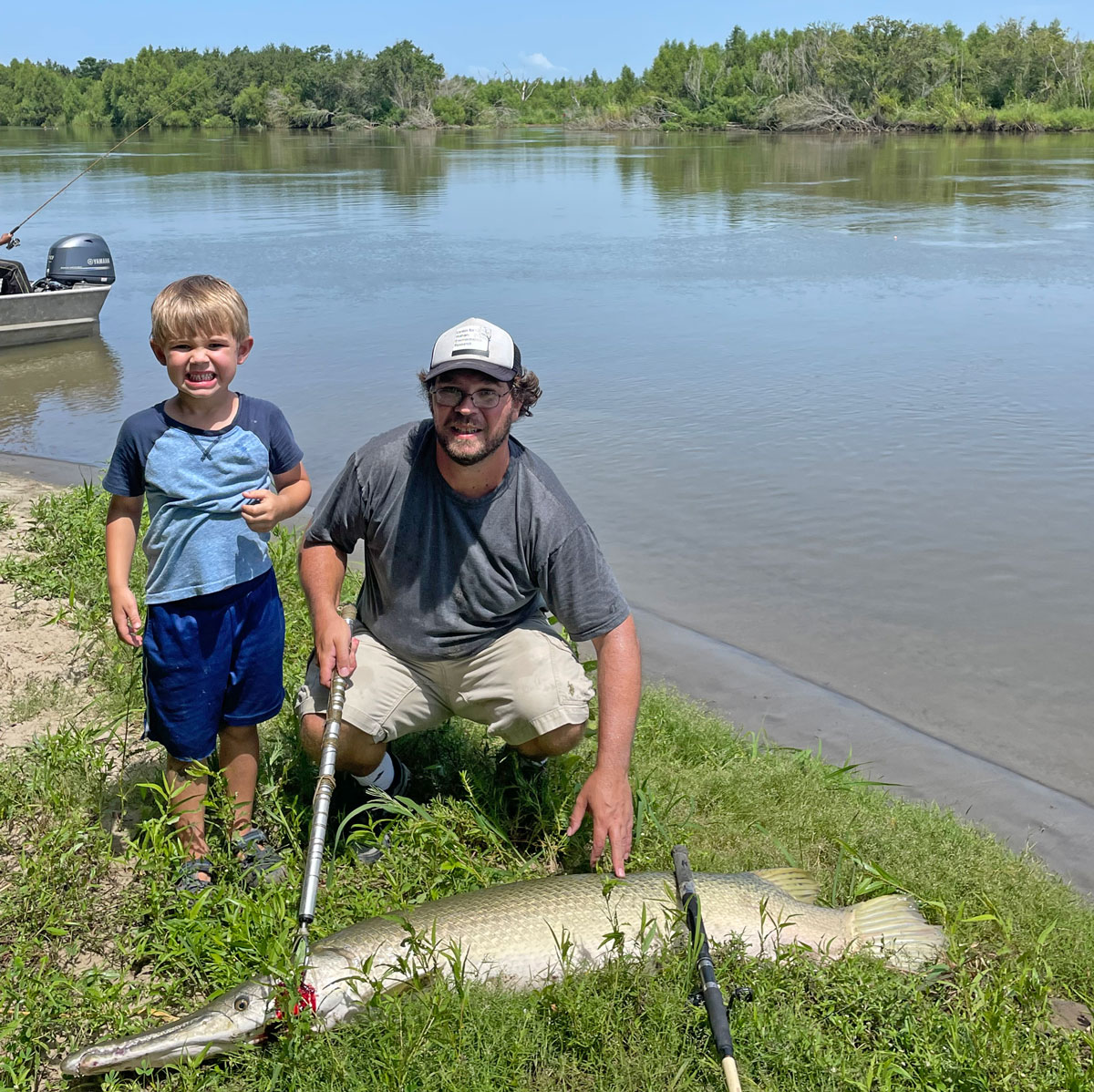 “This was really a once in a lifetime thing,” McCall said, “and it was fluky in a lot of different ways. I just had the right tool and was in the right place at the right time; chance took care of the rest, I guess.

“I’ve had catching one of these big gar on my bucket list for decades,” he said. “Now, I can cross that one off the list.”