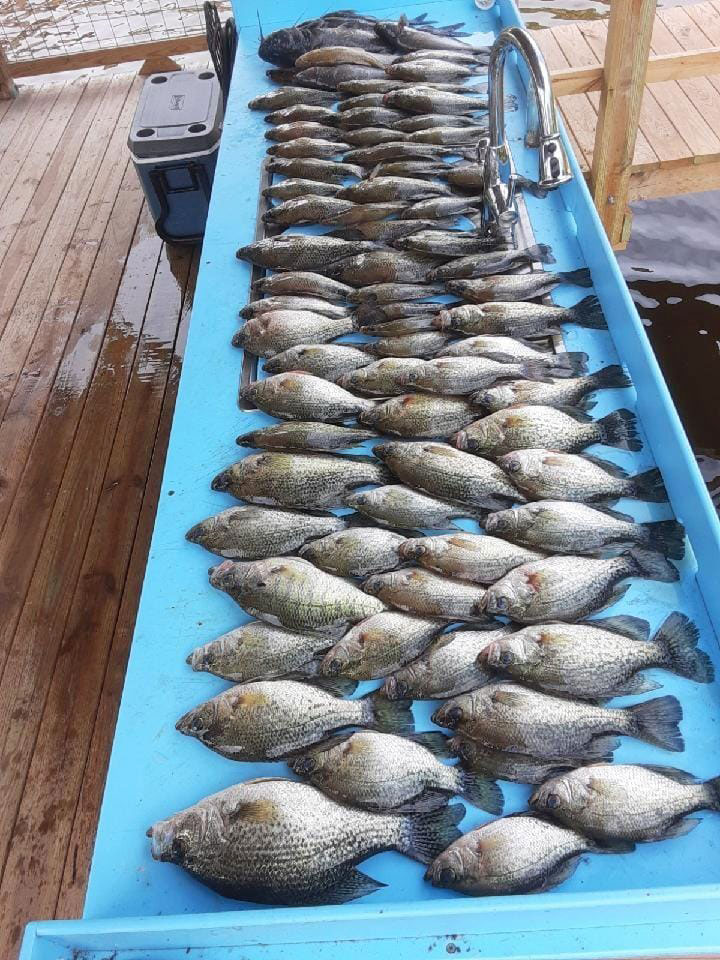 Stephen Couvillion and four friends left Toledo Bend with 72 sac-a-lait after a recent trip, and a photo of their impressive haul garnered hundreds of likes when it was posted on social media, slabs laid out like shingles, enough to roof a shed.

The group was guided by Bob Lareaux, whose existence has been something of a guarded secret among those who employ him, a secret that has now gotten out; Lareaux’s calendar is already crowded for next year.

“We met him at Toledo Town at about 7 in the morning,” said Couvillion, who lives in Cottonport and has employed Lareaux on several occasions. “There were five of us; two of us had been fishing with him before, but the rest had not.”

From Toledo Town, the group travelled to Sepulvado Landing, about 20 minutes away, and launched their craft, a “party barge” outfitted with a unique fish-finder set-up that Lareaux uses to great effect.

“The transducer is rigged on a pole that he can rotate 360 degrees so he’s literally looking at a whole brush pile, telling you if they’re off to the left or right and how deep they are,” Couvillion said.

Brush piles in a cove

Lareaux took the fishermen to a cove where he had numerous brush piles and other underwater features marked in his GPS.

“Lareaux would say: ‘Okay, give it six pulls on this brush pile,’” Couvillion said, explaining that a pull is the amount of line between the reel and the first eyelet on the rod. “A pull is from the end of the reel to the first eyelet of the rod. And then we’d pull our line 6 times, which might (be) 11 to 12 feet (deep).”

The instructions varied according to what Lareaux saw in the fish-finder.

“One thing he doesn’t do — that I have a tendency to do when fishing on my own — is stay a long time on a spot,” Couvillion said. “With (Lareaux), if two or three people on the boat don’t start catching, we’ll move to the next spot.”

“He cranked a little Honda generator that powers a FryDaddy,” Couvillion said. “And a little while later, he brought us some fried fish nuggets. So, you put your shiner on with your right hand, and eat with your left, (hoping) that you don’t get it crossed up. It’s a service he provides that’s different, but nice; four or five handfuls of fish nuggets can keep you going without a hitch.”

“Two or three of us have boats and have fished all our lives,” Couvillion said. “But sometimes you’ll still get out there and not catch anything; that’s when having a guide pays off.”