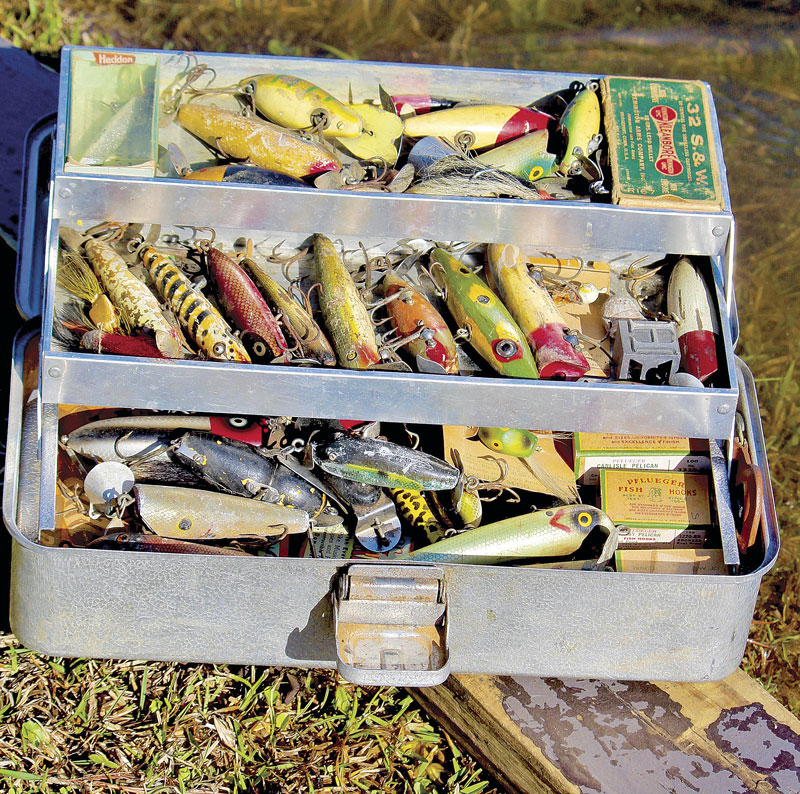 Perhaps as we get older, we are more disposed to the paraphernalia of the past. That’s especially true when it comes to fishing gear and accessories of bygone, but not forgotten, days and the embedded memories they release.

The Mississippi outdoors is a plethora of fishing-related history. Nothing conjures up the attention of old and young alike than a glimpse inside a tackle box of old wooden bass lures. Or holding up an old saltwater rod and reel that has fought a literal ton of redfish, snapper or hundreds other species. Or, a factual explanation of an old piece of equipment and how it worked. Every piece has a story to tell and the past 50 years has been a whirlwind of change for fishing.

They say if you don’t know where you’ve been, you can’t know where you are going. That’s wise beyond words and reminds us that fishing is more than, well…fishing. Even my favorite old fishing book points to that fact.

“Rivers and the inhabitants of the watery element were made for wise men to contemplate, and fools to pass by without consideration,” wrote Sir Izaak Walton in the Compleat Angler.” That was in 1653.

So a look back is worthy, if not essential. In the following pages, Mississippi Sportsman writers Kinny Haddox and Chris Holmes present a “Double Feature” on some of the things of days gone by that got us to where we are today. Come and go along. Perhaps you’ll learn something. Or perhaps you’ll recall something that makes you realize maybe you are just a little bit “old school” yourself.

First, let’s go way, way back to grandpa’s steel rod and HALF and HALF tackle box. Apparently this was one of the first brands of tackle boxes, dating back to 1909. My grandpa used to carry an assortment of hooks and lead in his.

Half And Half is an old tobacco product, also known as Burley and Bright, and the “tackle box” started out as a pipe tobacco can which, when emptied, Pops repurposed into a tackle box. He also had an old steel rod and reel and a tiny metal reel that was just that, a reel with small handle and wooden knobs.

Okay, now let’s go just way back. Remember Wooden cricket boxes, two-tray UMCO tackle boxes, small wooden fish decoys, Lucky 13’s, the River Runt and maybe a Nip I Diddee or SkipJack? The first plastic worms were types like Lunker Lures’ pre-rigged models, complete with three hooks, beads and a spinner. And what about cane poles and those clamp-on rod holders that fit on your car window trim to hold them?

Now, let’s take a look at some of the “newer” old of freshwater fishing. As the bass craze kicked it up a notch in the 70’s and 80’s, a whole new world opened up where anglers carried an amazing selection of five, maybe six different kinds of crankbaits in their boxes, lures like the Little N, the Big O and the Hot Spot. Remember them? They still catch fish, too, if you are brave enough to risk losing one of them. And then came the development of multiple colors of plastic worms — black, blue and purple — worms that you rigged the hook in yourself, some new fangled technique called the “Texas Rig.” Mister Twister, Creme, Fliptail. Those were a few of the more popular. And there were only a few.

Studying the history and development of fishing equipment can go as in-depth as you’d like. Most would rather fish, so we may go into the future not even knowing some important facts.

In 1975, Jim Bagley, founder of the Bagley Bait Company, was in Monroe for a fishing seminar. I was blessed to get to meet him. The original lure he marketed in bulk was a pork rind type bait called the Black Magic Eel in 1954. But at some point in the early days, he also dabbled with plastic worms. He mailed me a couple of packs of his “Ol’ Jim’s Monster worms. They were red and cost 75 cents for a two-pack. Information on them is scarce. The current owners of Bagley lures, known mostly for its balsa wood products, had not even seen one nor could find out any information on it when contacted.

As we moved into the 1990’s and beyond, “plastic worms” came in all shapes and sizes — and colors. Suddenly, they also became “creature baits.” Those are still around today and come looking like crawfish, multi-legged lizards, monster centipedes and even alien creations from outer space. And the color spectrum broke wide open. Colors like June Bug and Watermelon Red, Pumpkinseed, California Love, Disco Green, South African Love and on and on hit the market. There are even weird colors like glowing chartreuse or bright pink. One major company today has over 600 active solid and combo colors available. They all seemed to catch fish, but most would agree some of those fish were awful hungry. Many of these baits don’t look like anything that a bass would see in it’s natural environment. And how about plastic frogs? There are probably more shapes, sizes and color patterns of frogs on the shelf of a major bait retailer than there actually are in Mississippi lakes.

Crankbaits began to take on a real-life look that was amazing. Computer generated printing lures made plastic crankbaits look like real bream, crappie and even baby bass. Crawfish models became popular, then 20 or more varieties of crawfish colors all had their favorites among fishermen.

Picking baits heading into the first few years of the turn of the century became a bigger challenge than picking a spot to fish.

Old School is important to a lot of folks and one of those is Neal DeForest, Jr., of Ruston, La. Neal grew up with fishing with his dad, Neal, Sr., one of the pioneers of club bass fishing in north Louisiana. The younger Neal has always had his dad’s detailed interest in fishing gear, but now that he has passed away, that interest is even more keen and ties him more to fishing than ever before. Fortunately, he still has many boxes of his dad’s old gear. He even has an original mold where Neal Sr. (who he calls ‘Ol Pod because that’s what he called most other folks), made his own Fliptail worms.

And, he still fishes with them today. He catches fish on them.

“Even if he was still around, it would be really cool to catch fish on the baits that he used and I’m sure I would do it,” said DeForest, president of DeForest Engineering Consultants. “I don’t think I ever feel as close to him as I do when I’m catching something on a lure, and I know that 50 years ago, he caught something on that very same bait.”

DeForest is protective of the old lures when he fishes them. He uses 30 pound braid and after almost having to go in after an old Mudbug one time, he started just fishing the deep divers in open water. And, he pretty much quit fishing the ones that dive out of his reach.

One of DeForest’s keepsake treasures is one of the old possum-belly tackle boxes full of crankbaits, spinnerbaits and topwaters. He also has his dad’s old fishing jersey mounted. Back in the early 70’s, “fishing jerseys” were covered in patches representing baits and companies. Nobody ever said it, but you figured the more patches a fisherman had on his shirt, the more fish he probably caught.

“I learned so much from dad about how to tweak these old baits to make them better,” DeForest said. “The little things make a difference. He hardly ever fished a lure without taking off a prop, bending a metal lip or adding something to it. I bet not many people today remember what the really good buzz bait fishermen did back in the day. They would tie on their buzz baits and leave them hanging out the window while they were driving. Spinning the blade for hours at 45-50 miles an hour would definitely give it a different ‘chirp’ when you pulled it through the water.”

DeForest said finding an old lure and trying it out is one thing, but to actually catch a fish on it is another.

“Coming to grips with the reality that a bait has been sitting somewhere for 50 years or longer, just waiting for a chance to maybe get used again. It feels special to take them out and give them a whirl,” he said.

One of the most exciting catches was on an old clear brown smoke Boy Howdy. DeForest cleaned it up with an emory cloth and tossed it out past a brushtop, not far from the boat. He saw the water boil under the bait, then teased the fish with a slight twitch.

“Boom. He nailed it,” DeForest said. “It was over seven pounds. And on a topwater close to the boat, one that dad had caught fish on, it felt like no other fish I’d ever caught before. I just sat there for a few minutes and thanked God for the whole experience. Then I took a couple of pictures and put the fish back.

Sometimes today he uses an old bait to jump start a tough day on the water. Throwing one of those, especially catching a fish on it, kind of gets your mojo going a little bit and helps you catch more fish, he said.

DeForest’s first experience fishing on his own was when his mother’s dad took interest in him and taught him how to set up a trotline and store it on an old wooden paddle with slots cut for the hooks. One day, DeForest made up his own 14-hook line from scratch, baited it with nightcrawlers from a neighborhood cane patch and set it in a pond behind the house. He said he dreamed all night of getting up and running that trotline full of catfish.

“I still remember like yesterday,” he said. “It stormed all night and it was so sloppy down there, but every hook except two had catfish on them. I took them off and we cleaned them and dad fired up the Coleman stove out back and fried them up. I still have that old trotline paddle hanging in my office. It means a lot to me.”