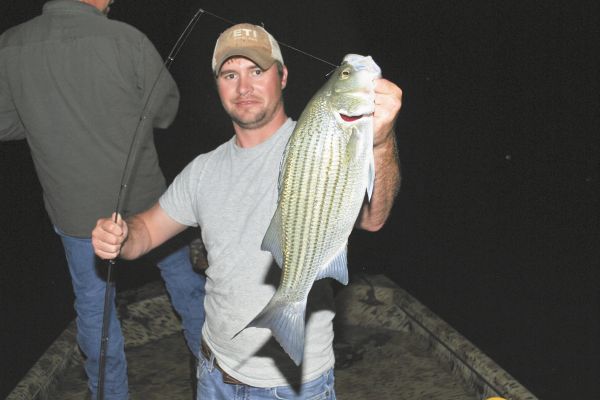 When darkness falls on Lake St. John, hybrid stripers swarm around pier lights. And these anglers know how to get them to bite.

It was over in a second.

A clatter, a clunk, a splash and a horrified gasp, followed by a wail of anguish and disbelief.

He kept looking from his hands into the inky, black water, mouth gaping.

“It’s gone man; it’s on the bottom,” said Thornton, as if breaking bad news to him.

The 42-year-old Thornton was trying to stifle a laugh, but not doing a very good job of it. His wife Kelli had to turn her face away from Andrews to keep him from seeing her suppress her own grin.

Where moments before, a cocky, almost brash 30-year-old stood, now slumped an incredulous young man temporarily stripped of his confidence. His last words before the fishy larceny were, “You can do this all night — just wear them out, go from light to light.”

Chuck offered Andrews another rod and reel from the boat’s rod locker as he shuffled toward the back of the boat to sit down.

After a few minutes, he turned to me.

“Don’t put what happened in the article. No one will believe it,” he said.

I can’t say that I hadn’t been warned about the fish’s ferocity. Back at the camp, before it was dark enough to fish, the fishermen beefed up their lures by replacing the factory hooks with saltwater-series models.

“They will tear stock hooks apart,” explained Thornton, while jamming a hook on a split ring.

“They are powerful fish,” Andrews agreed.

“Like freshwater redfish,” Thornton said like he was finishing his friend’s sentence. “We will catch some largemouth bass doing this. After catching some of these (hybrid) stripers, it’s like pulling in a dishrag.”

Andrews added that the silver-and-black-striped fish are so powerful they will tow an 18-foot boat around.

When chasing thee powerful hybrids, Andrews is more particular in his lure choices than is Thornton.

“I only use a Bandit 100 or 200 series crankbait,” Andres said. “Color is important: Only use pearl white with a red eye.

“You’re wasting your time with a blue or black-backed lure.”

Later, however, he did admit to occasionally using silver Rat-L-Traps with blue or black backs.

Thornton uses Bandits and Rat-L-Traps, as well as Bomber crankbaits.

Both men use casting reels, although they admitted that spinning tackle will work. The Thorntons spool their reels with 12-pound-test line, while Andrews uses lines of 10- to 15-pound breaking strength.

With groceries and clothes stowed in the camp and rods, reels and lures checked out, Andrews — obviously not the type to sit on his hands — was impatient and ready to go. He paced the back deck of his parent’s camp overlooking Lake St. John.

Ray and Cathy Andrews bought the camp eight or 10 years ago, by son Josh’s reckoning. The Andrews family, as well as the Thorntons, hails from Smithdale, Miss.

“Even though I’m from Mississippi,” Andrews said, “95 percent of my fishing is here: Black River, Lake Concordia, Lake St. John and Lake Bruin.

“People from McComb (Miss.) come to this Vidalia/Ferriday area at lot, especially when the river is up.”

The river he was referring to is the Mississippi River, the same river that pushed the Andrews family from their camp on Lake Mary in Mississippi to Lake St. John.

“The Lake Mary camp flooded every year, and we had to take everything out — and the roads were bad,” Andres explained. “My dad’s parents, Tommy and Nellie Andrews, and her brothers Mannie and Alfred Cothern started me fishing here years ago. I grew up fishing this lake — bass, white perch, bream, catfish, striped bass.”

Night fishing for hybrid striped bass started almost by accident. In 2006 or 2007, Andrews and his cousin Derrick Cothern were staying at the Lake St. John camp on a catfishing expedition. They decided to take “a fling” on the family pontoon boat after dark and saw about 10 underwater fishing lights at camp piers.

They saw fish at the lights — big ones and lots of them — so they returned to the camp and got their rods. That night they caught 22 of hybrid stripers.

Thornton entered the picture as a friend of Cothern’s.

“Derrick asked me if I wanted to try night fishing. I had always rod and reel fished so I said, ‘Yeah,’” Thornton said. “We really caught them. It was really cold because it was winter … but I was hooked right then.

“I got to know Josh at the camp, and now we fish a lot together. I love it and try to do it 10 or 15 times a year. I like them on the grill, like redfish. I love redfish, and they are as good as redfish.”

“I like to catch them too,” wife Kelli chimed in.

“That’s one thing we try to do: hunt and fish together,” Chuck said.

“Is it fun?” Andrews asked before answering his own question. “Haw! If you take someone that has never been fishing, they will catch fish.

Lake St. John, an abandoned loop of the Mississippi River, is almost completely ringed with camps. Almost all of the camps have docks, and a large percentage of them have underwater fishing lights. Made by several manufacturers, with the most popular being the Green Monster, the lights are powered by shore power and controlled by automatic switches with light sensors.

Thirty to 40 lights were within striking range of the trio. Some would be holding fish and some wouldn’t. The plan on this night was to bounce from light to light by boat, picking up fish where they could.

“People really don’t mind others fishing at their lights,” Andrews said. “Just don’t break them or get up on their docks to fish a light.

“And don’t fish at lights if the people who are paying the bill for the light are fishing.”

As the trees’ shadows slowly became longer, Andrews’ pacing became relentless. The underwater fishing light at a neighbor’s camp dock became visible in the decreasing light, and he kept looking at it as if it were a fishing barometer.

“They’re there!” he finally exclaimed. “C’mon.”

Andrews escorted me to the pier. Sure enough two big shadows were alternately hovering and gliding around the neon-green umbra of light.

And then it began raining, to Andrew’s chagrin. Not until the rain quit and it was absolutely dark did they leave. Breathing the black air was like inhaling through a smotheringly wet blanket. Not a star was visible.

The first fishing light they hit was their neighbor’s, so they simply used their trolling motor to maneuver to it. As the boat neared the light, the two men on the bow began chattering.

Kelli had discretely decided to man (or is it woman) the stern, well out of range of the two excited men’s treble hooks.

“Chaos” is a good one-word description of what happened when the boat got into casting range. The powerful fish hit the crankbaits with such force that it was if they attacked them wide-open, head-on, going in the opposite direction of the lure’s movement.

Chuck used the trolling motor to keep the boat just outside of the light’s influence. Treble hooks whistled through the air, lines crossed, men grunted and fussed.

Kelli, I learned, becomes quite verbal while she fishes. When the two men on the bow hooked up first, she mockingly complained.

“Put in the story about the greedy boys putting me in the back of the boat,” she said.

But it didn’t take long for her to hook up. She kept talking, this time to the fish.

It was over in minutes. The final score was eight hookups, one lure with destroyed hooks, one broken line and three big bruisers in the boat.

“That’s the routine,” Chuck explained. “Two, three, four fish, and then all the commotion and they stop biting.”

There is not a lot of finesse to working the lures in this fishery — just cast, crank and hang on.

The next light they sneaked up on produced not a fish. Not a bite. Not even a shadow in the light’s green glow.

The third light was a good one, producing three hybrid stripers and a yellow bass, a runty little cousin of the big hybrids.

They decided to cross the lake, which is really shaped more like a river than a lake. From the middle, both shores of the oxbow sparkled cheerily with camp lights in the dark night.

“One fish, two fish, maybe three,” Andrews said. “They get used to (the boat’s presence). They know.”

Big shadows were easy to see lurking at the edge of the fifth light long before the slowly moving boat closed to casting range.

Much to Andrews’ disgust, his cast got away from him and the crankbait ended up hung in the overhanging limbs of a cypress tree. Kelli and Chuck hooked fish, though.

Kelli’s tore off, but Andrews waited until Chuck boated his fish before trying to dislodge the lure.

Unfortunately, the commotion disturbed the fish at the light, so the trio took the boat back across the lake to the side they started on. Andrews immediately hooked and landed a husky fish.

On his very next cast, the striped bandit stole his rod.

The disconsolate young man sitting in the boat’s stern put a damper on fishing. Then it began sprinkling again, putting a lid on the affair.

Besides, they had enough fish: The floor of the boat was littered with them.

Back at the camp, Andrews’ irrepressible grin returned when he struggled to hold up his end of the heavy stringer. He’d be ready again tomorrow night.

Think out of the box for fall Louisiana crappie

When it comes to getting bites from crappie, this north Louisiana guide has some new ideas on catching them in the fall. […]