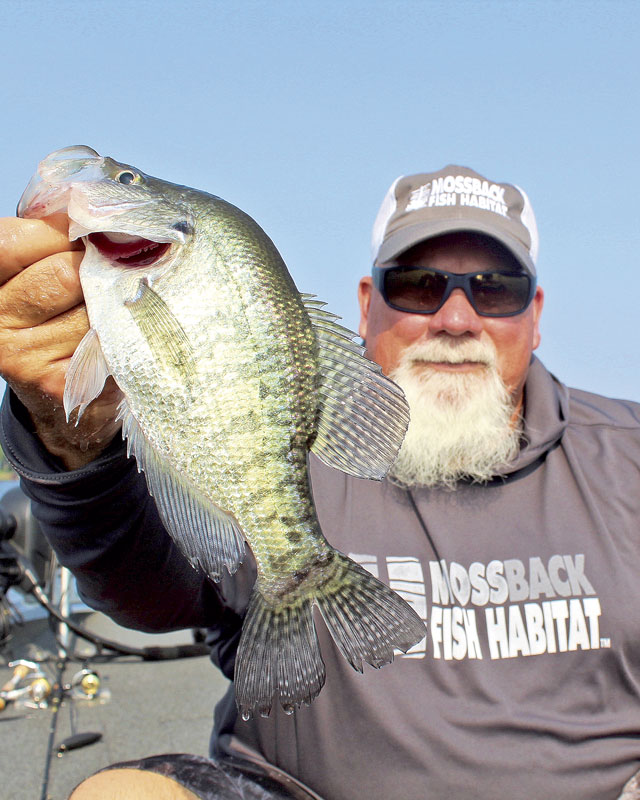 And it didn’t matter if there were any there or not. He was going to bring the fish to him, “Field of Dreams” style.

You know, “If you build it, they will come.”

That was the first order of business this pretty spring day on Lake D’Arbonne in Union Parish as Godwin guided his 21-foot dark gray SeaArk off the channel to the edge of an underwater flat. We were officially crappie fishing, but there was work to do before we dropped the first jig in the water. And while Godwin is well known for his duck hunting, he also loves catching crappie.

“See that little underwater hump right here beside the little depression?” John asked as he pointed to the screen of his Humminbird Helix electronics. “This is a perfect spot for crappie to stage going back and forth between the spawning areas and the deeper water. What it needs is a MossBack Fish Habitat to hold the fish here where we can find them easily.”

And Godwin just happened to have one laying in pieces right on the bottom of the boat. And not just any setup, but the John Godwin Signature Crappie Tower model he helped design. You know you really believe in something when you let them put your name on it.

“One of the first things I liked about these is the fact that it comes in pieces and you can lay it in the bottom of your boat and take it anywhere you want to on the lake without anybody knowing you are about to put out a fish attractor,” the West Monroe angler said. “The less attention, the better. And when you get where you want to deploy it, you can put it together in 10 minutes or less and you don’t even need any tools unless you put the optional block adapter to help weigh it down.”

But the artificial habitat isn’t about convenience. It’s about attracting fish. The design of this unit allows varying spaces between the v-shaped limbs and a main trunk. The limbs that are closer together help provide protection for baitfish and smaller fish. The larger spaces are great spots for gamefish to layup and hide in order to ambush an easy meal. The rough texture of the limbs provides fast growth surfaces for algae and the “v” actually captures silt and allows aquatic vegetation to grow on the limbs.

The best way to put out these artificial structures is to find spots like the one Godwin had located. It’s a spot that the fish already naturally travel, he said. Find the edge of a creek, a flat, or somewhere the fish use as a path while moving from place to place. When you throw it out, mark a way point on your graph. If you don’t have a graph, make sure and put the structure in a spot that is easy to relocate by using other landmarks.

“These structures work in any depth of water, but I like deeper water, especially in the bigger lakes,” Godwin said. “The magic number for me is 14. If I can find water off a point or on the edge of a flat that is about 14 feet deep, that’s just perfect. The tower is eight feet tall. The habitat holds fish from the bottom up to six feet under the surface. They can stay there almost any time of the year and bunch up where they are easier to find.”

The key is finding areas that fish already like to use. You don’t want to just throw it out in the middle and hope for the best. Those best spots vary from lake to lake. In smaller lakes or ponds, the structures should just be put near some sort of change in depth to be more effective. On a private pond or lake, it doesn’t even matter if the top of the structure is visible because fishing pressure is controlled. On a public body of water, the less people that know right where it is, the better, Godwin said. But he adds that if other fisherman find it, that’s okay, too. It’s good for the sport.

The amazing thing about these American-made manufactured fish habitats is that fish come to them quickly. When Godwin had assembled the first structure on this particular morning and tossed it in a “sweet spot,” we came back less than an hour later and it already had crappie on it.

“See them there?” Godwin said, once again looking at the electronics. “Fish are naturally curious and they come to check out something new just like you would if somebody put something new in the middle of your house. Add in the fact that food starts showing up pretty quickly in the form of baitfish and it starts looking like a pretty good place to hang out for a while.”

Then he tossed a bait out into the top, jigged it across a couple of limbs and set the hook on a big crappie.

Fishing an artificial structure should be approached in much the same manner as any structure. Godwin recommends approaching quietly and not getting right on top of it.

“In most of the areas I use the Crappie Tower, I like to get close enough to cast out passed the structure and reel the bait back by it,” he said. “The Crappie Magnet Fin Spin is ideal for that. Fish the edges of the structure first from top to bottom and if you aren’t getting any bites, try casting toward it from a different side or angle. Even if you can see fish on your electronics, it doesn’t mean they will bite every time. When things are tough, I like to downsize my bait and slow down the presentation. The new Crappie Dancer on a jig head is a good option. If they won’t hit a moving lure, just get as close as you can and present the jig vertically and just hold it still. Sometimes that will trigger a reaction strike if it is just sitting there in front of their nose.”

Artificial habitat differs from natural brushtops and fish attractors in several ways, but the most important is that the artificial units will last forever.

“If you put out a brushtop of cypress or willow or something, it’s going to be gone in a year or two and it’s going to add a lot of silt to the water, which isn’t always good,” Godwin said. “With a MossBack, it will still be here when your grandkids’ grandkids are fishing.”

Congregating the fish makes it much easier on anglers, especially those that don’t have a lot of extra time to spend on the water. If the fish are really biting, it can even give fishermen time to catch a mess of fish and still enjoy a ham sammich.

From the garage to the lake

It’s a story of the American dream and ingenuity, born from the simple desire to catch more fish. And like many ingenious devices, it began in the garage.

David King of Springdale, Arkansas, grew up on Beaver Lake and loved fishing for crappie among the vast standing timber of the lake. But he moved away and when he returned home, the trees were gone. He wanted to help draw fish to a good spot and tried all kind of habitat from cedar to PVC pipe, but none of it worked. So he got the idea for the v-shaped limbs on a trunk made of rough material to help grow algae. He saw the v-shaped design as a way to hold silt and grow more vegetation — all things that attract fish. And he wanted it to last a long time.

The MossBack fish habitat met all that criteria and King started fishing and catching around them. So did friends he gave them to. Soon he decided to heed their advice and start selling them. Today his product is in lakes all across the country. You can place them horizontally, vertically or hang them off a boat dock to provide great structure.

“It’s just been a blessing and it’s helped a lot of people catch fish,” King said. “And it isn’t just for crappie. It attracts bream, bass and catfish and of course, all kinds of baitfish. We’ve done electroshocking tests that show that, plus we’ve caught all those kinds of fish around the MossBack.”

One of the most interesting stories about the habitat comes from Texas, where a landowner was having trouble growing big bass on a 120-acre private lake despite providing everything possible, including a huge population of forage and bait fish. Finally, some students came and put tracking devices on the bass. They found out that every big bass was chasing baitfish up to a mile every day just to eat. There was no structure for the bait to hide, or for the bass to ambush it. After installing a whole network of MossBack structures, the bass started showing growth in a matter of months. It turns out that a bass swimming a mile for food every day is like a human running a marathon every day.

“You can’t play hide and seek in an empty parking lot and that’s what the bass were trying to do,” King said. “They were working off every ounce they gained just chasing down their next meal. Adequate habitat changed that.”

You can learn more about how the habitats work and see all the optional setups on the internet at MossBackFishHabitat.com.