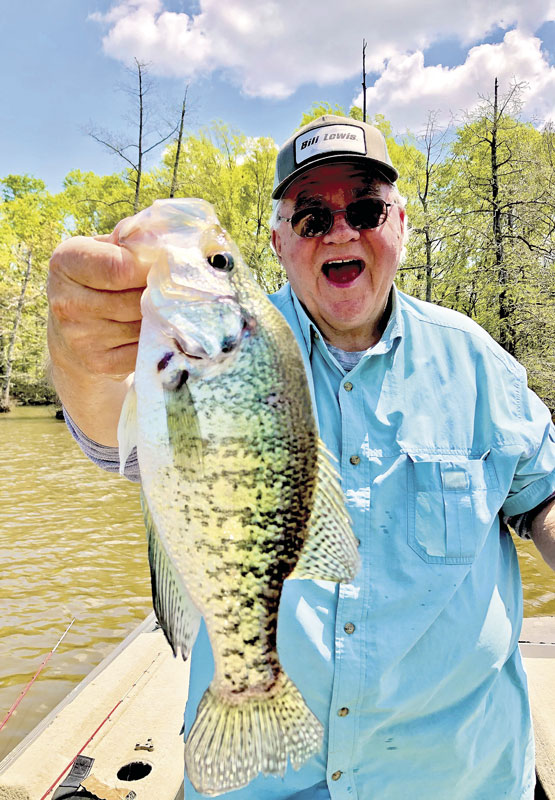 Proper presentation makes a difference at the crappie table.

Fishing with live minnows, or shiners as some folks call them, sounds pretty simple.

Net a slippery little bait, stick the hook through it and throw it in the water. But as popular college football analyst Lee Corso likes to say, “Not so fast, my friend…”

Think about this. There are literally hundreds of shapes, sizes, colors and actions of artificial crappie lures. Why? That would seem to strongly suggest that fish don’t always like the same thing to eat and they certainly like different presentations on their plate.

That’s why it’s so important to mind your “minners.”

Minners of course, being what are more properly referred to as minnows or shiners. And while some of us can remember when you used to buy minners for two cents apiece, now the popular live crappie baits cost $12 or more a pound. That’s about the same price as a ribeye steak!

So not only is it important that you take care of these critters, it’s also good to know you are making the best use of them on the end of your hook.

For those who like to be scientifically correct, the most common minnow in our area is the golden shiner (Notemigonus crysoleucas). It is also the most widely pond-cultured fish in the United States. It usually grows to an average of two inches long for perfect use as fish bait. At certain times of year on certain lakes, smaller minnows work better, while at other times, larger ones do. This varies from lake to lake and season to season. Here are a few ideas to vary your minner minding presentation:

The traditional and most common way to hook a minnow is right below the middle of the dorsal fin. This allows the minnow to remain upright and still swim. When you hook them this way, be careful not to jab the point of the hook too low and go through the spine in the middle of the minnow. That will cause a very short life span and won’t help if you want a little wiggle in your bait. This presentation will work just about any time the fish are hungry.

Back of the eye

If you are very careful, you can hook a minnow right behind the eye socket and bring the point out behind the other eye. The advantage of this rig is that it, too, allows the minnow to swim upright and actually keeps the head up a bit. Most fish attack bait from the front and that also puts the point of the hook right where the crappie is most likely to bite, especially if it isn’t just on a feeding frenzy.

Well, almost in the tail. You can run the point of your hook through the middle of the minnow right before the actual tail section. This hook strategy actually gives the minnow a chance to swim and wiggle more than any other setup and allows the minnow to swim away from approaching prey. Unfortunately for the minnow, that usually makes the fish even bite more aggressively and with a hook in their tail, they can’t swim fast enough to actually get away.

I don’t know why, but hooking a minnow through the bottom lip and out the top lip often works to trigger strikes. When you use this method, the minnow sits pretty much vertically in the water. Sometimes fish like that.

Mouth to gill to belly

This one isn’t a go-to for many people, but sometimes the fish aren’t aggressive and the “dying minnow on it’s side” appeals to them. When you slip the hook through the minnow’s mouth and out the side of the gill, you can then hook it back into the bait’s belly and the bait basically just sits there with a little motion every once in a while. Remember, even if the bait doesn’t move at all, your motions holding the pole and even the slightest current or wind make the bait move at least a little bit.

The real trick here is to be versatile.

Just like fishing with artificials, if you find something that is working, stick with it. You can hook minnows on regular crappie hooks or fish them on a bare jig head. Some people put a minnow as a trailer on a full plastic or hair jig, especially when the fish are wanting a big bite. One other tip — if you are fishing a plain hook, make sure your weight is on your line at least a couple of inches above the bait to give it maximum action.

If the fish aren’t biting, never hesitate to experiment. “One size fits all” only works on cheap Cowboy hats.