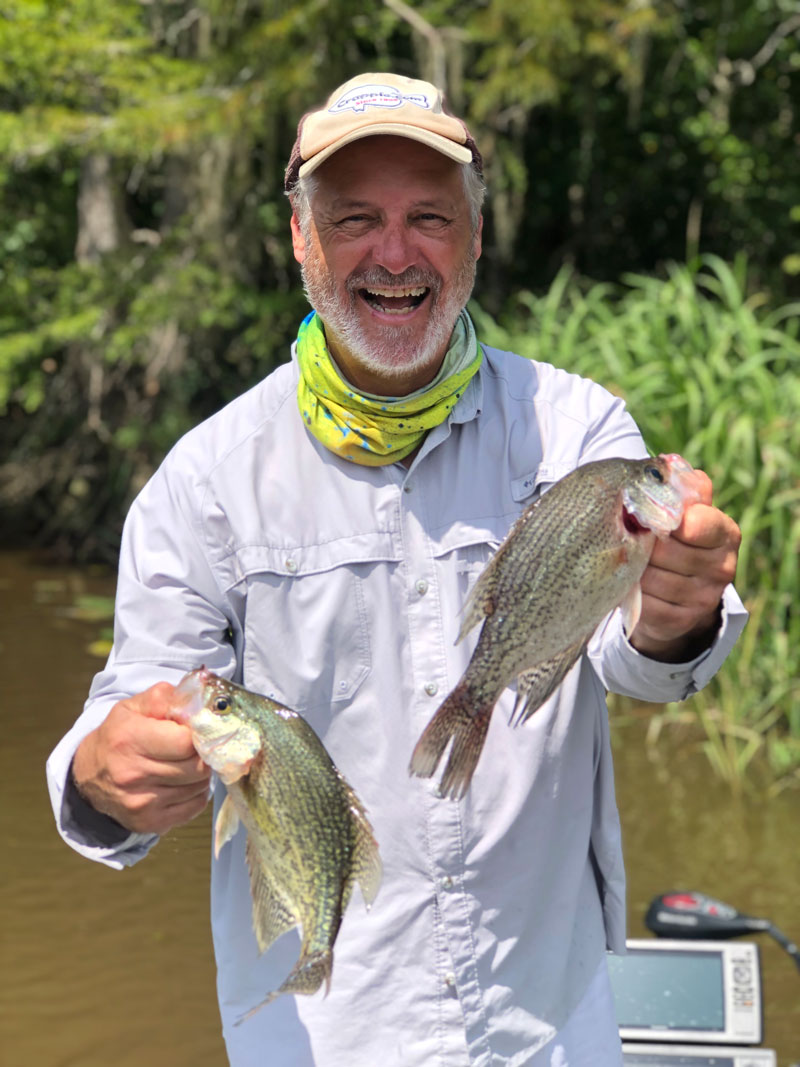 However, it’s not a Christmas tree in the living room that excites Guillot; it’s the one on his fishfinder.

Guillot fishes the East Pearl River and Lock One on the Pearl River Navigational Canal and said he’s starting to see the Christmas tree pattern on his electronics with the cooler water temperatures. Guillot has been sac-a-lait fishing for 20 years and has developed a manipulative way to catch these fish by using a top-down approach.

“When I spot a school of crappie I always lower my jig down and stop about two feet above the first fish on top of the group, Guillot said. “This allows that fish to leave the school, which in turn, results in the group remaining undisturbed.”

As the colder temperatures set in, Guillot said he’s seeing a more pronounced “Christmas tree” arrangement of sac-a-lait, which fits his style perfectly. “It seems the fish that are more active and ready to feed are higher up in the column leaving the inactive, smaller fish on the bottom where they are closer to cover,” he said.

On a recent trip, Guillot was fishing with his friend Wayne Ulrich. The two were fishing the East Pearl River near Honey Island Swamp when his screen lit up with a distinct tree shaped school of fish.

“It was a very large eddy that formed in 30 feet of water,” he said. “Two oak trees were sunk in the middle of the eddy and had a 12 to15-foot gap between them.”

Both John and Wayne were using Bobby Garland jigs in the Lights Out color. Guillot lowered his jig slowly down and when it was nine feet above the first fish on top of the school, the fish darted straight up and inhaled the lure.

“He smoked that jig,” Guillot said.

As he was unhooking his fish, Ulrich dropped his tube jig down and the same thing happened; the top fish on the “tree” swam vertically and swallowed the jig.

“Since they were swimming straight up, almost at ballistic pace, we would just boom them up, keeping their heads from turning until on the surface,” the sac-a-lait veteran said. With the fish ranging from 1 pound to 1.5 pounds, the ice chest filled up quickly. Now that’s a tree loaded with Christmas presents for a crappie fisherman!

The team loaded a 48-quart ice chest with sac-a-lait and continued to catch as the ensuing fish flopped on the carpet of his boat.

“It was a freaking awesome experience,” Guillot said.

While Guillot has an assortment of rods, line, and jigs in his arsenal, his preferred set-up when targeting stacked crappie is a 10-foot rod with a Tennessee handle.

“The Tony Edgar Signature Ozark Rods are my absolute favorite,” he said. For line, Guillot likes 10-pound Camo monofilament by Mr. Crappie. He said the line is heavier pound test than needed but thinks it makes a difference when it sinks.

“The 10-pound test is not needed, but the extra water it displaces slows the bait’s sink rate,” Guillot said. “Also, the tubes are much less likely to spin on the way down.”

The tube Guillot speaks of is a 1.5-inch Southern Pro tube threaded on 1/32-ounce jig head. A BPS 1/20 Clam Shot is attached 4-5 feet above the hook. He adds superglue to the tube in case he runs into a frenzied bite; he won’t have to waste time re-adjusting his tube on the hook. To add flavor to the tube, Guillot uses a syringe to pump Slab Sauce into the tube body.

For electronics, Guillot operates Panoptix and turns the transducer to “LiveView Down” to watch the fish rise out of the pack.

“A fishfinder set to the Ice Fishing or Jigging mode will do the same thing,” Guillot said.

When locating sac-a-lait in a Christmas tree holding pattern, water temperature is crucial. Guillot said he typically sees the phenomenon when the water column temperatures are fairly even at 60 degrees or lower. The larger fish will typically be located at the top of the “tree” — like the bright star topping off a holiday living room Christmas tree.

As far as why the larger fish are on top?

“I can’t say but I usually catch the bigger fish at the top and smaller at the bottom, so security comes to mind,” he said. “Maybe the smaller fish feel the need to stay close to the bottom where the structure is.”

While Guillot usually fishes the East Pearl River and Lock One in southeast Louisiana, he advises those looking for vertically stacked fish in December to target the deeper lakes like Toledo Bend and Lake D’Arbonne as well.

“If your presentation is good and you are quiet when landing your catch, to me, it’s the ultimate crappie fishing condition to find yourself in,” Guillot said.