There’s a lot of water in the long and winding Red River in northwest Louisiana. But the key to finding crappie in the Red River this time of the year isn’t the river itself. It’s the oxbows off the river.

Finding November crappie is pretty simple. Find an oxbow lake off the river, work your way to the back and look for baitfish. If you can find a spot with some deeper water nearby, that’s even better.

Then you’ve found where the crappie will be.

“Between summer and fall, the fish position in these oxbows, in the deeper spots, and then as the water cools, they will push up in the shallows,” said crappie pro Justin Smart of Minden. “There’s one thing for sure on the Red River. From this time of year on until it gets really cold, you’ll find the crappie in the shallower water, and they’ll be in the oxbow lakes.”

Smart said the best water on the Red River is anywhere between 4 and 8 feet deep, and the fish also like to hang close to the stumps in the oxbows. If there is one thing the river oxbows have, it’s plenty of stumps.

“It’s like anywhere else,” Smart said. “The fish follow the baitfish, and that’s where the bait is. I would expect there are some pods of bait out in the river, but we don’t even ever look. The river itself fluctuates so much and can get so muddy, it’s hard to fish. But the oxbows are full of crappie, and they are pretty easy to catch.”

Smart calls the Red River one of his home “lakes”, and his knowledge helped him and partner Wesley Miller come in second in the recent Crappie Classic on the Red, where they cashed a $40,000 check.

“Fishing did get a little tough then, because there were boats everywhere in the popular places, and the crappie got pounded,” he said. “But that isn’t a problem on a normal day this time of year. Usually, there aren’t that many boats anywhere you fish. For somebody who isn’t familiar with the river, I’d suggest just finding an oxbow and learning as much about it as you can. Otherwise, you are going to be running up and down the river, burning expensive gas and maybe never get on top of fish.” 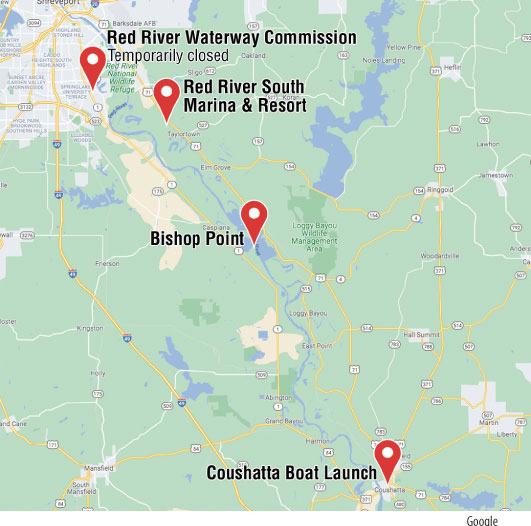 The oxbows are not easy to fish from one aspect: they are full of stumps and trash. The flood of 2016 changed the landscape of many oxbows. The huge amount of water and current silted in areas, making them extremely shallow and deposited trash and debris almost everywhere. There are no boat lanes in these lakes, so proceed with caution. Smart usually covers most of the water in the oxbows using his trolling motor only.

Crappie stay near the stumps most of the time, especially on sunny days. When the water is off-color or it’s cloudy, fish will often roam with schools of baitfish. As the water gets colder, the baitfish — and crappie — tend to congregate.

Smart said that in today’s world of fancy boats and electronics, there’s something special about the river oxbows that just still makes people happy.

“It’s still just really addicting to rig up a crappie pole with a cork and watch it go under. You can do that here,” he said. “You can fish bait under a cork and catch fish. It’s a great time to just use a minnow for that. Always keep a fresh one on. Having live bait is important.”

As you might expect, Smart also loves fishing the hand-tied jigs that his partner, Miller, makes, and he depends on ACC Crappie Stix fishing poles in 11- and 13-foot lengths to feel the bite and boat-flip big crappie. His favorite jig colors are those that mimic minnows: silver, gray and black. If it’s muddy, he likes to add chartreuse to the mix.

A map of the river is essential for a newcomer. Fishing is best in Pools 4 and 5; they have great access points. You can launch and fish Pool 4 out of the ramp under the Red River bridge in Coushatta. Popular spots are Red Oak Lake and the Jungle. You can launch and fish in Pool 5 on the Red River South Marina on the Bossier Side or just south of town at Bishop Park on the Shreveport side. Whitehouse is a popular oxbow in Pool 5.

One final piece of fishing advice for the Red.

“Just find you a boat ramp and get in an oxbow, start fishing, and when you find an area with fish, work it steady,” he said. “People are scared of the river, but you don’t have to be. Just respect it and be careful.”