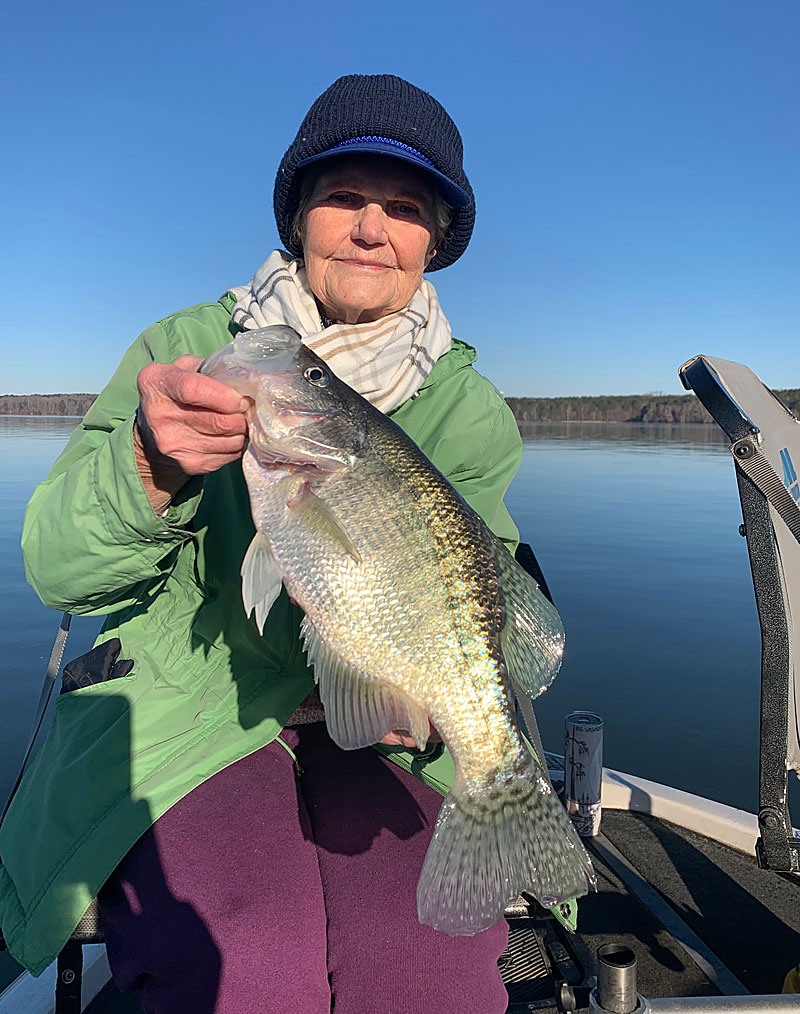 You can still have fun and catch crappie without electronics

Remember the good old days when you could grab a fishing pole, a bucket of shiners or card of jigs, head to your favorite spot on the lake and catch a mess of crappie?

You might even catch a couple of real slabs. It was fun. There was no frustration. No rush. No wondering what everybody else was doing.

And even if you didn’t catch many, you went home with hope for the next trip. And they all ate good. Remember those days?

Those days are still here. Believe it or not, it hasn’t been that long since nobody even heard of live sonar. And fishermen caught crappie, sac-a-lait or white perch (take your pick of names). You still can.

Let’s give the technology its due. There’s no doubt that fancy electronics has changed crappie fishing forever. In competitive fishing, it’s become a necessity. If you don’t have live sonar, you can’t compete because targeting the big fish is the only way to win, place or show.

But if you don’t want that electronics or can’t afford it, you don’t have to be intimidated by that. It’s still fun to just go fishing. Catch the ones you can. And call it a day. Don’t try to compare what you are doing with guys that have spent $10,000 on electronics. Just ask Blaine Salter of Erwinville, owner of Salter Jiggin’ Poles and a lifelong fisherman. He took over the business from his dad, J.B. Salter, and inherited and developed a world of crappie knowledge.

“Absolutely,” said Blaine Salter. “Hands down, I’d rather go out and fish all afternoon and work my tail off hitting tops, finding fish, catching 25 and having a great experience doing it than go stare at that scope all afternoon, see a thousand fish and catch only 50. Because at the end of the day, I’d be frustrated at all those others that I saw run off spooked or that I just flat couldn’t get to bite. A large part of the thrill of fishing is dropping that cork in a top and anticipating the bite, not because you see the fish swimming around down there, but because you hope he’s down there.”

Salter has live sonar and he uses it some, but as he said above, it’s not as much fun as the old way of fishing even if it is often more productive. He often uses it to see if there are fish in tops, then turns it off and fishes the top just like he did before it came out.

Here’s why, he said, “There is hope without the scope.”

Crappie want two things. First, they want to eat. That’s the key to catching them. And second, they want to be safe. Not long ago, schools of crappie would roam out into deeper water and be safe.

Not anymore, since live radar has allowed fishermen to follow and find them anywhere 12 months a year. That led to it’s own set of problems. Salter and many others believe that the crappie can “feel” the sonar hitting them. They can also see that big shadow hovering above them in the form of your boat and any noise sends them scurrying for the bottom. They’ll even lay there on the bottom. Numerous times, anglers catch them with mud on their bellies. Slab crappie have become as spooky as trophy bucks. But that’s another story.

Back to the basics of catching crappie by just plain fishing.

There are four major patterns for crappie fishing in Louisiana, based on the seasons. Fortunately for those who like old-school ways, this is the best for shallow water fishing, when fish go into water eight feet deep or less, often in water eight inches deep.

“The main thing you have to do this time of year is remember the spawn is either underway or it is coming, based on water temperatures,” Salter said. “From Alexandria south, fish spawn a little bit earlier than on the big reservoirs, but it’s coming.

To find fish, Salter said simply cover ground and manage the fall of your bait.

“Cover ground as efficiently as possible,” he said. “Whether you are fishing cypress trees or tops, put that bait down there in as many spots as you can until you find fish, then fish that area hard. If the fish stop biting there, they haven’t left. You’ve just disturbed them. Go hit some other spots, but always return and give your productive spots another shot before you call it a day. You’ll more than likely catch some more there.”

Salter said there are two things you can’t be afraid of, either. Muddy water and deep cover.

“Crappie don’t love muddy water, but this is the time when they will stay in it if the spawn is on and the temperature is right,” he said. “Don’t let that scare you away from good areas. And fish deep in the cover. If I have a spot I’m catching them, I’ll put that bait by every single piece of cover I can get a bait to. Don’t be afraid of getting hung up.”

In the thick cover, Salter also uses one of his favorite fishing tools, the Salter’s Weed Guard, a small plastic strip that fits any jig or shiner setup and keeps the hook protected until you set it on a bite. Salter also makes a line of great poles just for this kind of fishing.

If you fish relentlessly in a spot and don’t get a bite, move on. Even if it looks good to you, that doesn’t matter. It’s what the fish say that matters.

Salter also fishes smaller baits this time of year so the fall will be slower. And he always fishes top down. Some people lower their jig to the bottom, then ease it up at different intervals. That’s not natural, he said. He fishes by lowering the bait down a foot or two, then slowly letting it go lower until he finds the fish. Crappie never feed looking down and a bait dropped by them will often spook them. Remember this tip: Stay on top of your game for sure.

Straight up and down

Salter also recommends fishing straight up and down, even when you are using a cork.

“I never pull the cork left to right to move it,” he said. “I drop it by the structure, let it sit a minute and then pick it up and drop it in another spot.”

Salter also spends a lot of time fishing with legendary friend Dave Pizzolato and they’ve done a lot of studying of crappie and how to catch them minus electronics.

One thing Pizzolato taught Salter is that the more tops, logs and trees you hit, the more fish you will catch. Don’t waste time fishing areas where you don’t get a bite.

Don’t be afraid to change up colors, either. Do what you can to find and catch fish, then stick with what they want. Salter and Pizzolato fish a lot of south Louisiana waters, from the Lake Verret area to the Atchafalaya Basin and Spillway and dozens of lakes and bayous in between. There are tons of areas where it’s hard to get to the crappie, but the further up in those good spots you get, the better you’ll catch.

While live sonar has helped anglers catch fish, most of those fishermen are younger. It’s kind of like playing a video game for fish instead of star cruisers or the like. The cherry picking of big fish on the scopes also concerns Salter and many others.

“They are removing a lot of the two pound fish and it takes a long time for them to get there,” he said. “You can never catch all the crappie, but we are already seeing that the real slabs are far and few between on heavily pressured lakes. Sonar fishermen are plucking them out by the dozens all year long. Some lakes, like D’Arbonne, have had special regulations to try and help reduce people keeping the real great big ones. But it may not be enough.”

Learn about the fish

Lessons learned from live sonar, though, can help regular anglers, Salter said. Know that when fish are pressured, they go deeper into cover. When you make a noise, you spook the crappie, so be quiet. And watch the use of that trolling motor. The sudden “whhiiirrrrrrrr” will send crappie scattering.

“A paddle can win the battle,” Salter said, referring to the fact that a quiet paddle on a small boat isn’t such a bad deal. “And the guys in kayaks? They have a great advantage this time of year getting to the fish and fishing quietly. That’s why you see so many guys doing that today.

And remember you often have to put the bait right on the crappie’s head to get them to bite. Active fish hit a bait fairly quickly, but sometimes you have to give them a few seconds. Fish quietly, too. When you drop your bait or cork into the water, do it slowly. A big “ker-plop” is like a warning shot to a crappie.

“Every time there’s something new out there, a lot of guys have to have it, and they can’t fish without it,” he said. “That’s okay. But it is also okay to just do it the old fashioned way. You just have to do like I said. Pay attention, hit as much structure as you can and just have a good day on the water, whether you catch 10 or 50. Isn’t that why we go fishing anyway?”