It’s no secret that the Northshore of Lake Pontchartrain is home to some of the best sac-a-lait fishing in southeast Louisiana. From the Pearl to the Tickfaw, all of the rivers and bayous produce boxes of slab crappie for anglers in February. While there are numerous options as far as where to fish, there is clearly one river that shines in February: the Tchefuncte.

Ray Miller of Madisonville fishes the Tchefuncte year-round; he said February is the month that sac-a-lait are easily accessible because the spawn is bringing them into the shallows. Admittedly, Miller loves to deep-jig the main river during winter, but he said it’s good to see that cork shoot under when they move up to the bank.

“I grew up cork-fishing, so there’s something that brings out the inner kid in me when I see that cork go under,” he said.

While most fishermen stock one or two different types of corks in their tackle box, Miller says he has a wide variety of them.

“My friends say I have a cork fetish because of how many different shapes and sizes I have in my box, but a variety of corks comes in handy, ” Miller jokes.

In February, Miller fishes with a black and gold hand tied 1/32-ounce hair jig rigged 2 feet under a sliding cork. He also adds a split-shot a foot below the cork to keep the bait in the strike zone.

“If you don’t use that weight, the shiner will swim right up to the surface to get away from the fish that’s chasing it,” Miller said.

While all of February should produce shallow-water slabs in the Tchefuncte River, Miller said some days are better than others, and it has to do with the moon phases. 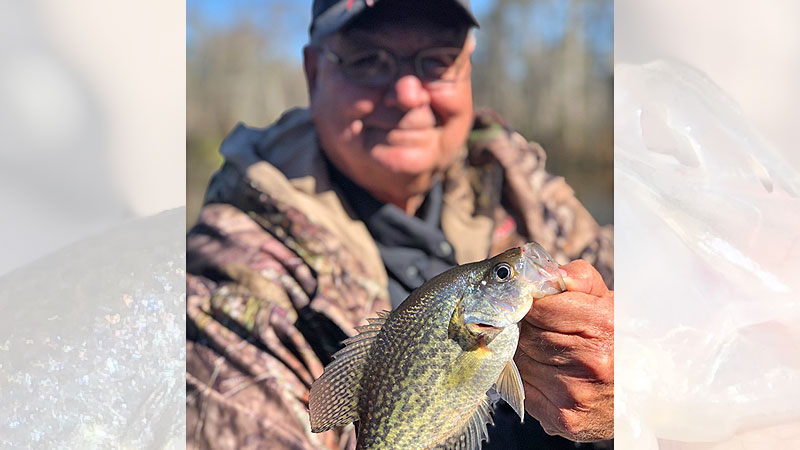 “Something that really triggers these fish during the spawn is the moon phase. Take a look at your moon-phase chart and usually, the three days leading up to the full moon and the three days after the full moon — those are the days you need to target these sac-a-lait,” he said.

While sac-a-lait are not very sensitive to moving water during the summer and winter, during the spawn, they are looking for still water to lay their eggs. Miller likes to find and fish dead-end canals this month.

Another important factor is to do your homework when you fish. Pay attention to the water temperatures and the locations of where you catch fish. Mark them on your electronics or write down a description of the specific spot. Chances are that that same spot will produce fish the following year when you return. Miller journals all of his trips so he can know what to expect from month to month. According to Miller’s journal from last February he caught 120 sac-a-lait on four trips so this month looks to be primed for sac-a-lait success!

Find more fishing reports from Keith Lusher Jr. at NorthshoreFishingReport.com. He can be reached at keith@northshorefishingreport.com.

How to retrieve a topwater popper

Professional bass angler Brian Latimer shares how he retrieves a popper and what he looks for to fish it around. […]

Chas Champagne heads to Seabrook, a place that used to be magical for fishing, but since the closure of the MRGO it hasn’t been the same. […]